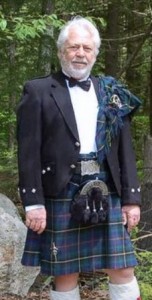 The 1791 entry of Clan MacInnes into North America will be marked on July 12 when Clan members place their first Canadian cairn in Cairn Park, Antigonish, during the historic 150th Antigonish Highland Games in Nova Scotia.

Clan Historian Norm MacInnis told Celtic Life International that the MacInnes Cairn will be dedicated to the pioneer Clan families who settled eastern Nova Scotia during the late 18th century.

This cairn marks the second in Clan MacInnes’ plan to place Clan Markers in key locations with Clan significance. “The inaugural marker was a granite bench at the entrance of Ballachulish Church in Ballachulish, Scotland, where MacInneses and other clans gathered to pray before the 1746 Battle of Culloden,” Norm said.

“We decided our next marker should be in Cairn Park in Antigonish because the eastern shore of Nova Scotia was a major point of entry for families fleeing hardship and persecution from 18th century Scotland.”

Modeled after the Clan’s ancestral castle in Morvern on Scotland’s central-west coast, the Antigonish cairn will contain a stone from Clan home Kinlochaline Castle, along with other stones donated by Canadian and U.S. members of Clan MacInnes International Association. “The placement of these stones on the cairn symbolizes the struggle of our ancestors and a union of the old world with the new and the hope for a better world,” Norm said.

“The 150th anniversary is a testimony to the dedication of the Antigonish Highland Society, the volunteers and the performers. This anniversary recognizes that the Antigonish Game organizers of the past and present have been delivering “the real thing” for 150 years.”

Norm has quite an impressive history himself, having been active within Clan MacInnes for twenty years, first as New England Commissioner, then President. His current role of Clan Historian fascinates him.

“Clan MacInnes is an ancient clan with roots in the sixth century Dalriadic period,” he explained. “Closely allied with Clan Donald, Clan members fought under Somerled, the Lord of the Isles, for the expulsion of the Vikings.

“The Clan Chief and his five sons were assassinated in 1258 on orders from John the Good, then Lord of the Isles. These executions effectively ended the Chiefly line. At that time, many of the survivors took up an offer from Clan MacKinnon on the Isle of Skye to become their official bowmen.”

Today, many members of the Clan live in Scotland, the United States and Canada. The Clan MacInnes Society was founded in the U.S. at Grandfather Mountain in 1970. In 2000, the Clan reorganized as the International Association of Clan MacInnes to reflect their growth as a global organization. The association now has around 400 members in the U.K., Canada, the U.S. and Australia.

The Clan has been awarding annual scholarships in Scottish arts, music and dance since 1972. Members also offer quarterly newsletters in North America and Scotland and Clan tours and travel opportunities to Scotland and Nova Scotia.

Publishing books related to the Clan as well as Scottish and Celtic culture is a focus. The group has published various Clan histories as well as The American Guide to the Auld Scots Tongue. Members offer genealogical assistance and historical research and access to a clan archive.

In July, in addition to raising the memorial in Antigonish Cairn Park, the Clan will hold their AGM in the town, which will be attended by members from all over North America keen to celebrate the 150th anniversary of the Antigonish Highland Games.

Future plans include raising Clan Cairns in the Cape Fear area of North Carolina and Kinlochaline, Scotland, as well as publishing another book of Clan history, and expanding the Clan’s Scholarship Program.