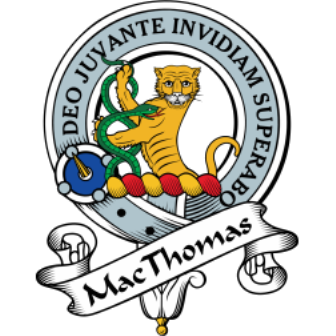 Clan MacThomas’ history is long and exciting. The roots of the clan, which today boasts several hundred members in branches across the globe, come from Tomaidh Mor – “Great Tommy” – a Gaelic-speaking Highlander. Thomas was a descendant of the Clan Chattan Mackintoshes and lived in the 15th century.

At that time, the Clan Chattan Confederation had become large and unmanageable, according to Wendy Thomson, the clan’s North American Convenor. So Thomas took his kinsmen and followers to Glenshee, where they became known as McComie, McColm and McComas.

The Government of Edinburgh declared them as MacThomas and so described them in the Roll of the Clans in the Acts of the Scottish Parliament of 1587 and 1595. MacThomas remains the official name of the clan to this day.

Among the long line of illustrious MacThomas Clan chiefs was John McComie, who inspired legends. Among them was his defence of a poor widow single-handed against a number of tax collectors; the killing of the Earl of Atholl’s champion swordsman; the slaying of the man who insulted his wife; and overcoming a bull with his bare hands.

In the 1870s, the 16th Chief was the eccentric George Hunter MacThomas Thoms, an advocate, bon vivant and philanthropist. He became the Sheriff of Caithness, Orkney and Shetland in 1870 and upon his death in 1903 gave his vast fortune to St. Magnus Cathedral in Kirkwall.

The Clan MacThomas Society was formed in 1954. This year marks the clan’s 60th anniversary, which was celebrated in Glenshee in August with a tour of clan territory, a ceilidh and more.