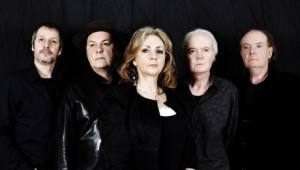 Two of Ireland’s finest musical artists – Clannad’s Moya Brennan and Celtic Thunder’s Keith Harkin – are on tour across North America this fall.  They took time out to share a phone call with Celtic Life.

Despite the differences in age and sex, Irish musicians Moya Brennan (Máire Ní Bhraonáin) and Keith Harkin have much in common. They both hail from the northern part ofIreland (Brennan from Gweedore, CountyDonegal and Harkin from Derry). They both write, record and perform original music (Brennan with Clannad and as a solo artist and Harkin with Celtic Thunder and as a solo artist); and both will tourNorth America with their respective ensembles this fall.

“I absolutely adore being on the road,” shares the 60-something Brennan, whose Dublin-based band will be performing across Canada and the U.S. until December.

“It’s wonderful to get back there,” she continues, acknowledging the group’s almost 20-year absence from the continent. “North American audiences have always been so enthusiastic and supportive of what we do.”

“There’s no place in the world like it for touring,” agrees 26-year-old Harkin, one of five current members of super-group Celtic Thunder. “The energy and the response are fantastic, and we make a ton of new fans and friends there every time we’re over.”

Both artists say they owe their success to their Irish roots. “As children, our home was filled with melodies,” recalls Brennan. “My mother taught music and my father was a travelling musician.

“Folk, classical, jazz, rock, pop – you name it and we were exposed to it. Either the radio or the stereo was blaring, or someone was strumming a guitar or plunking away at a piano or a fiddle. Each of my brothers and sisters – there were nine of us in all – sang or played some sort of instrument, and music was as much a part of our everyday dialogue as language.”

Much of that dialogue was in Gaelic.

“Gaelic was, and still is, embedded within our community. For our family, speaking Gaelic was as natural as speaking English.”

These musical and linguistic influences reached fruition in 1970, when five members of the Brennan family formed Clannad. Over the next dozen years, the band released several folk-infused albums, receiving critical acclaim for their traditional Celtic sound. In 1982, the group shot to international attention with the haunting title-track to the movie Harry’s Game. Three years later, they struck gold again with the Celtic-Pop crossover album Macalla, featuring the best-selling single In a Lifetime – a stirring duet with U2 frontman Bono.

“You can actually hear me teaching him some Gaelic phrases at the beginning of the song,” recollects Brennan. “He was so proud of his heritage and so eager to learn everything about it. And that wasn’t necessarily something you might say about a young Irish person at that time.”

The massive popularity of In a Lifetime catapulted Clannad to fame and shone the spotlight on modern Irish music.

“All of a sudden it was cool to be from Ireland,” chuckles Brennan, calling out her contemporaries Thin Lizzy, the Pogues, Sinead O’Connor, the Waterboys, the Saw Doctors, My Bloody Valentine and the Cranberries.

That swift renown laid a sure foundation for modern artists like Snow Patrol, Damien Rice and Celtic Thunder,

“Without them we would not enjoy the kind of success that we do today,” says Harkin, paying props where due. “Wherever we tour in the world, people come out as much for us as they do to just hear Celtic music.”

Like Brennan, the blond rocker grew up surrounded by sound.

“My father turned me on to Neil Young, the Beatles and Tom Waits,” he remembers. “And, even though I was raised in the north, Irish and Celtic music were a huge part of my sonic landscape.”

Those early influences are all in evidence today, both in his work with his band mates and with his recent self-titled, debut solo recording.

“What these artists all share in common is strong composition,” explains the six-stringer, whose collection of acoustic and electric axes would be the envy of all aspiring guitarists. “They bring words and music together in arrangements that are almost perfect, flawless – especially the Celtic stuff, which is very structured. That style has shaped my own songwriting process and it is at the core of what the band does.”

Despite their success, both Brennan and Harkin have their feet firmly grounded in Irish soil.

“I don’t have the time for it,” states Brennan of her superstar status. “I’ve always been too busy with my family and with my work to get caught up in that nonsense. And no-one here at home would tolerate it.

“I think it’s unfair that so many people take the piss out of a guy like Bono just because he is so famous. No matter how popular U2 have become, I have always known them to be regular, down-to-earth guys. And it’s pretty much the same for all of the Irish artists I know.”

“That’s the joy of being in Ireland,” pipes up Harkin. “Nobody gives a damn who we are.”

It is, he believes, a cultural quirk.

“It’s an Irish thing, for sure,” he laughs. “Celebrity really doesn’t carry much weight here at home. We can go off for a pint at the local pub and people pay no mind to us at all. To them we’re just other Irishmen. It’s great actually.”

By contrast, Los Angeles– where Harkin resides when he is not back home or on the road – is star struck.

“People are always stopping me to say hello or ask for an autograph,” he says. “I don’t mind it, but coming from where I do, I sometimes can’t help but wonder what all of the fuss is about. I mean, it’s just me.”

Reprinted from the Fall 2012 edition of Celtic Life International Magazine