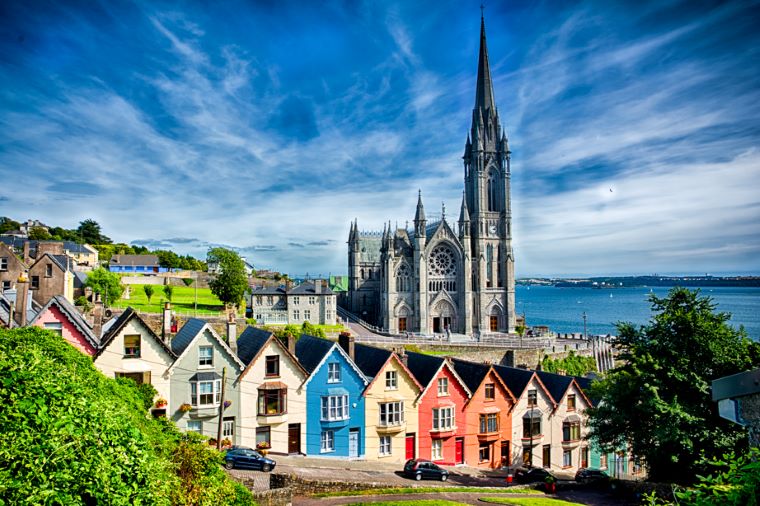 The second largest natural harbour in the world, close to Cork City, the port of Cobh was a naval base, a port of call for cruise liners, and the nation’s main embarkation port for emigrants to America.

A town steeped in maritime history

Cobh is a small seaport town close to Cork City, Ireland’s second largest city. In many ways, Cobh is a typical Irish town with attractive, colourful rows of terraces facing the harbour and rising up the steep hillside, but what makes this place worth a visit is its long historical tradition as Ireland’s maritime capital.

Allegedly the second largest natural harbour in the world, it is said that 300 ships were anchored in Cobh at one time, the town has seen millions of people coming and going by sea over the centuries. First a naval base, and later the nation’s main embarkation port for emigrants, Cobh eventually became known as a health and seaside resort which is regularly visited by luxury liners bringing tourists from all around the world.

Originally known by the Gaelic name An Cóbh -“the Cove”- the place was a small fishing village which  developed rapidly after the British used its naturally protected harbour to create a naval military base during the Napoleonic Wars in the early 1800s. 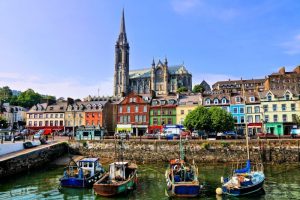 The town’s south facing, temperate climate soon began to gain a reputation as a health resort which brought many visitors in search of good weather. One such visitor was Queen Victoria of Great Britain, who in 1849 visited the place and had the town temporarily renamed as Queenstown.

For the Irish, Cobh was infamously known as the country’s main emigration port to America. From the Great Famine of 1846 up until the late 1950s, over 2.5 million Irish men, women and children departed from Cobh to the New World, including 40,000 being deported to British penal colonies such as Australia.

The naval military base created in the early 1800s was still in use and became an importantly strategic outpost for British and American military personnel and equipment during World War 1. Following Ireland’s independence, the facilities were handed over to the Irish government, which in turn based its own Irish Naval Service on Haulbowline island, facing Cobh.

During the second half of the 20th century the port kept on carrying business as usual for naval and commercial fleets as heavy industries such as shipbuilding and steelworks bloomed in the port area.Today, tourism is one of Cobh’s main economic activities. Maritime tourism is key to the local economy with some 40 large cruise liners calling every year and bringing an additional 30,000 visitors to the area. The terminal at Ringaskiddy also has ferry services to Brittany and Wales. Where Cobh was historically the last sight of Ireland for many thousands of emigrants, now is the first sight of Ireland for overseas tourists.

Cobh is a small but busy, cosmopolitan town of around 13,000 inhabitants. It is well served for the tourist trade with many pubs and hostelries to suit all tastes.

Pub life is an essential part of Irish culture and Cobh has many excellent places where you can enjoy a drink. Mostly located in the town centre, many pubs have a maritime theme and contain photos and memorabilia of old ships. Live music, modern and traditional, is regularly played in a number of pubs. 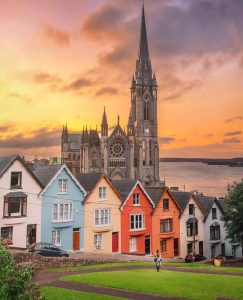 Music and live performances are also at the centre of several of the festivals held in Cobh throughout the year. The cultural highlight of the year is the Cobh Peoples Regatta in  August, but there are plenty of other popular festivals such as the Cobh Maritime Song Festival, the South of Ireland Pipe Band competition, the International Deep Sea Angling Championships and the Titanic Commemorative Weekend, to name a few.

The town is small and easy to get around on foot. The focal point for tourists is the 19th century neo-Gothic St Colman’s Cathedral, which stands on a hill dominating the town’s skyline. The seat of the Diocese of Cloyne, this beautiful Cathedral has the largest Carillon in Ireland and Atlantic Europe and many people from all over the world come over to listen to the sounds of its 49 bells.

The Cathedral has great views of the harbour and is an ideal place to see the luxury liners in Cobh. Of the many liners that visited the historic port town, the Titanic and the Lusitania are the two that still remain in the town’s memory.

On the 11th April 1912, Queenstown was the final port of call for the Titanic on her ill-fated maiden voyage across the Atlantic before she sank with 2,206 people on board. A Titanic memorial is located on Pearse Square and Titanic Trail Tours are offered to tourists interested in knowing the Titanic story in Cobh.

On the 7th May 1915, during the First World War, the transatlantic liner Lusitania was approaching Queenstown en route from New York with 1959 people on board when she was sunk by a German submarine about 15 Km off the Old Head of Kinsale. 1198 passengers died and only 761 passengers were rescued. The recovered bodies were buried in mass graves in the Old Church cemetery in Ticknock, and a Lusitania Peace Memorial was erected in Casement Square.

However, for the Irish people Cobh is most infamously known as the embarkation port of over 2.5 million emigrant Irish men, women and children who left the country between 1848 and 1950. That dark episode of Ireland’s history is brought back to life in the museum The Queenstown Story, which is widely acclaimed as the best exhibition about the years of mass exodus in Ireland.

By the 1800s, Ireland had become an impoverished nation after centuries of domination by Great Britain, which ruled Ireland in a way that often did not coincide with Irish interests. The failure of the potato crop from 1845 to 1849 and the subsequent mismanagement of the crisis caused a widespread situation of famine and disease where thousands died and millions had to leave the country as their only chance of survival.

From 1848 to 1950 over 6 million Irish men, women and children -half of Ireland’s population at the time- emigrated from the country. Over 2.5 million departed from the transatlantic port of Cobh, making it Ireland’s single most important port of emigration. 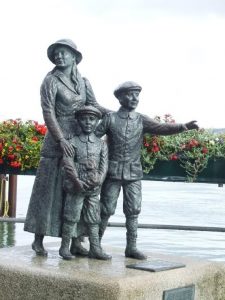 Located next door to Cobh’s railway station, by the harbour which would have been the last sight of Ireland for millions emigrants, Cobh Heritage Centre – The Queenstown Story is a unique multi-media exhibition about the years of mass migration from Ireland.

The majority of the famine emigrants embarked at Cobh went to Canada and the United States. Over 40,000 Irish men and women were deported to British penal colonies such as Australia. Many emigrants to the New World were transported in coffin ships, a term used to refer to overcrowded, disease ridden vessels which resulted in the deaths of many passengers.

The exhibition shows what it was like to spend weeks as a passenger in an emigrant ship. Black and white film and sound effects help to relive the living conditions endured by the more than 2.5 million Irish people embarked at Cobh.

Most of the people who left Ireland in those times never saw their homeland again. But many return after several generations trying to find out any information about their ancestors. The Cobh Heritage Centre provides a genealogy research service for visitors trying to trace an Irish ancestor.

The museum also documents other episodes of Cobh’s maritime history, such as artefacts, photographs, video exhibits and reconstructions of rooms of the luxury liners, and a section about the ill fated Titanic, which called in at Cobh in 1912.

Close to The Queenstown Story, in the former Scots Church building overlooking the harbour, the Cobh Museum also hosts a range of permanent exhibitions about Cobh’s maritime heritage including local memorabilia and some genealogical research information.
Outside the Cobh Heritage Centre is the statue of Annie Moore and her two brothers, which together with St Colman’s Cathedral is the most photographed monument in Cobh. Annie Moore and her brothers left from Queenstown and became the first ever emigrants to be processed in Ellis Island, New York when it officially opened on 1st January 1892. The statue, unveiled by the President of Ireland Mary Robinson in 1993, stands as a symbol of the many Irish who have emigrated on that very same journey.