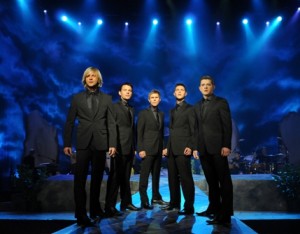 Colm Keegan admits he was a tad nervous when he auditioned for Ireland’s world-acclaimed singing group, Celtic Thunder

“Scary I think is an understatement. It was absolutely petrifying!” shares Keegan. “For the guys who were there from the start, the original members, you know, Ryan and Keith and Neil, they had no idea how big the show was going to become. I suppose the nerve wracking thing for me when I was auditioning, I did know how big the show was and the fan base was and seeing how it was number one on the Billboard charts. There was this kind of weight of a lot of things on my shoulders going into the doors of the audition.”

If you are a loyal Celtic Thunder fan, then you know that Keegan proved successful during that “petrifying” audition. He joined the musical group and stage production back in 2012, and describes the last few years as a whirlwind, admitting that he’s enjoyed every second.

Twenty-five-year-old Keegan was born and raised in Dublin in a family of five boys. He remembers music being a part of his life early on.

“All of us were kind of thrown into the local cathedral choirs since we were pretty much able to speak,” he shares. “So singing had been second nature to us, just like everyone else in the country. I think everyone in Ireland has some sort of musical background.”

Keegan sang solos and won music awards from a young age, and his choral experiences brought him to such remarkable venues as Catedral de la Santa Creu i Santa Eulàlia in Barcelona, Brno Cathedral in Prague, St. Patrick’s Cathedral in New York and St. Peter’s Basilica for the Pope in Rome.

Those choral experiences were quite different than those, more recently, as part of the choir that performed with Celtic Woman, and now Celtic Thunder.

“I was used to standing in a robe with a folder in my hand looking at a conductor,” Keegan laughs. “All of a sudden there was no folder and no conductor, and in front of me was an audience, and I didn’t know where to look or what to do with my hands. It didn’t really come second nature at the start, but you kind of jump in the deep end, and luckily it has worked out well.”

Before touring the globe with either of Sharon Browne’s Celtic music groups—both of which have topped the Billboard World Music charts—Keegan completed an honours degree at University College Dublin.

“When I was in university I studied music and the Irish language, and at the time I would have had to have spoken Irish almost as my main language.” he says. “So to do an Irish music show afterwards for me was kind of an amalgamation of a few different Irish cultures that I love, so it’s been brilliant. And that was one of the things that I asked on my first show [with Celtic Thunder]: to be able to sing a song in Irish.”

Keegan’s first solo with Celtic Thunder was a song in Irish Gaelic and English called Buachaill On Eirne, previously performed by Damian McGinty, which invites listeners to “Come by the hills to the land where life is a song….”

Highlights for Keegan have been many since becoming one of Celtic Thunder’s principal singers; and the making of the group’s Mythology DVD might just outperform all the rest of his fond memories to date.

“We were standing on the stage back in Dublin at The Helix theatre and it was an invite-only audience, so it was all family and friends of the cast,” he describes. “When you’re standing there and you see your mom and dad, and grandparents and your friends and your rugby mates and everyone in the audience, I remember thinking I hope the camera doesn’t see my legs shaking on stage. To be honest I think that was probably the most nerve-wracking show I’ve ever done, and with that, it probably had to be the most sense of relief at the end of it.”

With a Celtic Thunder cruise, a symphony tour across the United States and a Mythology tour across Australia, 2014 was a very busy time for Keegan and his fellow Irish songsters.

“It was a real treat for me to perform with someone of her musical calibre every night,” notes Keegan.

On the road throughout the eastern United States, Keegan and Durrant played Irish pubs and other performance venues, and also wrote some of their own songs; a relatively new project for Keegan that he plans on pursuing further.

With the amount of time the Celtic Thunder lads have spent touring together, as well as recording and rehearsing, Keegan says they’ve all become a very tight and special group.

“You know they’re the people you wake up with, and you fight over the fact that someone took the last Corn Flakes. All the kind of ‘important’ topics to complain about, we fight about them all; and we laugh about everything and we cry about everything,” admits Keegan. “The second we get back from a tour and we’re not waking up in the same bus, we’re all ringing each other wondering what we’re wearing and having for breakfast that day.”

The Irish singers have together experienced many highs, as well as lows, including the passing of their fellow Celtic Thunder mate, George Donaldson, in March of last year.

“When George passed away it was like losing a family member,” shares Keegan. “For the ‘Very Best Of’ tour, it’s going to be very difficult to have that gap on stage. He was a huge, loveable character. We’ll miss him and it’s going to be very difficult; but it’s kind of nice that we’re all feeling it, and without speaking about it all the time, we know George is being thought about all the time by everyone.”

Over the phone, Keegan’s enthusiasm indicated his good spirits while he stood in the corridors of the very secondary school he had attended, Gonzaga College. He was helping out with the school’s production of Bugsy Malone.

“I like to keep busy,” explains the Dubliner, who was just as busy before joining Celtic Thunder. Some of his pursuits included starring in and helping direct other musical theatre productions, volunteering with Habitat for Humanity in Ghana and Zambia, completing triathlons, playing hurling, rugby and Gaelic football, and teaching singing at a youth performing arts school, among other endeavours.

Today what Keegan seems most passionate about is sharing some of what he loves about his homeland. “I’ve always been a huge lover of travelling and different cultures,” he says. “To be able to travel as part of my job and sing Irish songs that I’ve known and loved since the time I was in a cradle and heard my parents and grandparents sing, you almost have to pinch yourself.”

Keegan adds, “One of my favourite aspects of the show is standing on stage and singing songs, maybe even in the Irish language, and seeing some American or Canadian or Australian audiences singing along with us.”