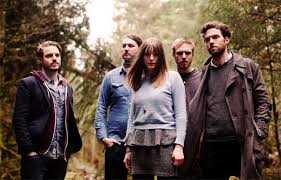 Irish rockers Come On Live Long are receiving great critical and popular acclaim since the release of their latest recording Everything Fall. Celtic Life International recently spoke with the band about their past, present and future.

What is your own background?
We are all Irish. We hail from Meath, Roscommon and Sligo. We’re a bunch of country folk.

When and why did you start playing music together?
Steve, Rob and Louise were in a folk band before amalgamating into Come On Live Long with Daithi and Ken which is the electronic/folk/funk circus that you hear today. We started playing music together because that’s what we all love doing. some people like dancing or acting. We like playing tunes. We’re all terrible dancers.

Are they the same reasons you do it today?
Yes we’re still bad at dancing and still like playing music. We are currently writing again for the next record.

How has the group evolved since that time?
We started initially as a 3 piece playing small venues in Dublin. Our personnel and sound grew and gradually the venues did too. We are only together 2 and a half years. We have an album and 2 E.P’s so I suppose the sound is constantly shifting and changing.

How would you describe your sound today?
Our sound has been described as widescreen. Not that I know exactly what that means but we use Drums, Guitars, Electronic Beats, Synths, samplers, Ukeleles, percussion and 4 of us sing.

What inspired Everything Fall?
The album was written and recorded over a year. I suppose we were all inspired by the things that we come across in our everyday life. Books, tea, tunes, smokes, news, sleep, crosswords, dreams, Guinness, ping pong.

What has the response been like so far?
The response has been great so far. We have gotten to play some great shows such as the album launch in Whelans in Dublin and an amazing show we did in Christchurch cathedral as a Nialler9/Le Cool night. There are plenty more to follow too.

Why the decision to release it on vinyl?
We released on Vinyl because we love the sound of vinyl and we are all avid collectors. I’m listening to the new Thudercat record as I write. Also, very few people buy cds anymore or else if they do they just copy it into their iTunes and throw the cd on a shelf. we did however release mp3 art sleeves if anyone still wanted the art without the cd.

Where do you typically perform?
Thus far we have performed mostly around Ireland. Cork, Galway, Sligo, Dublin but we plan pushing the project further afield in the close future. Maybe Europe or England and hopefully we’ll get over to you folk at some stage.

What does the band have on tap for the rest of 2013?
For the rest of 2013, we plan to write more music and hopefully play some great shows in the meantime. With a bit of luck we’ll get to see the inside of a studio as well.