Coming of Age In Derry 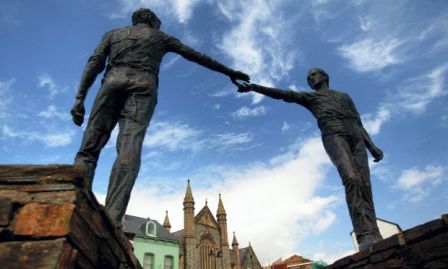 Like our humble reporter, the city of Derry has emerged from dark days with a stronger sense of self.

It was 1981, and Northern Ireland was at the forefront of world news. The IRA-backed hunger strikers had brought ‘the Troubles’ to the global stage, enraging some and enlisting the sympathy of others.

As a young Irish Catholic living in Montreal, Canada, the headlines caught my eye – perhaps more so given the parallels to Quebec’s divisive political climate.

Intrigued by my own family’s history (Dunphy, O’Doherty) I picked up a copy of Trinity, Leon Uris’ bestselling book on Irish independence.

The historically fictional story, based on factual events, told the tale of Conor Larkin and Seamus O’Neill, two Derry boys who rose from the poverty and repression of the Bogside to lead the Republican efforts in the late 1800s.

As a young man, angry with the world (rebel without a cause) and aching for identity (rebel without a clue), I was easily taken with the ardent fervour of Uris’ revolutionary fever; larger-than-life characters, scenery and storyline unfolded before my mind’s eye in an epic, soaring narrative arc.

To my friends, whose only interests as teenagers were sex, sports and stealing their parent’s booze, I was an angst-ridden anomaly. My high school professors, mostly Jesuits, questioned my misplaced loyalties. My family simply shrugged it off, calling it a phase and an ex-pat rite of passage.

That ‘phase’ of patriotism lasted for a few more years, during which time I devoured any and all information pertaining to ‘the cause’ of Irish reunification, constantly refuelling my home-rule fires.

It was not until 1985, with the release of Cal – Pat O’Conner’s striking film of the troubles (starring Helen Mirren) – that I was stunned into silence. This rude awakening preceded a spiritual awakening; I had become disillusioned with ‘the cause’ only because I had illusions to begin with.

Those realizations we reaffirmed during a visit to Derry in 1989, where I witnessed first-hand the impact that similar misconceptions could have upon two communities.

The process was, for me, a coming of age, and for the first time in years I had found peace.

After centuries of senseless conflict – which saw its peak between 1969 and 1998 when thousands were killed and injured – Derry (pop; 108,000) is enjoying a cultural and economic boom. Designated a City of Culture in 2013, it has built bridges over the last 15 years by breaking down walls.

Not literally breaking down walls, mind you; the famous Walls of Derry – once the only barriers keeping the European landscape from being altered forever (Google it; Siege of Derry) – remain intact, and have even been refurbished.

Instead, the ideological, psychological and emotional hurts and hedges are being healed and hurdled bit-by-bit – the signs are small, but they are there:

Newly emerging middle-class neighbourhoods, where Catholics and Protestants coexist in peace, are quickly becoming the norm rather than the exception.

Recently revised immigration policies mean that these mixed districts are opening their arms to groups and individuals from all over the world. In fact, more than 70 different languages can now be heard in and around the city on any given day.

Fair employment legislation ensures that local companies no longer hire by religious or political affiliation, but by sheer merit alone.

The nearby Corrymeela Centres offer peace and reconciliation study programs, drawing thousands of visitors each year, many inspired by the 1998 Good Friday Peace Accord and the subsequent awarding of the Nobel Peace Prize to its Irish architects, John Hume and David Trimble.

The recent success of Ireland ‘s Rugby team at the RBS Six Nations Championships in Europe has united Irish of all denominations. Celebrations were especially significant in Derry, which had both Catholics and Protestants on the winning squad.

Particularly poignant are symbols by the River Foyle, the watery inlet that has traditionally divided the two communities: the statue ‘Touching Hands’, which was erected on the waterfront in 2010, depicts bronze-like figures with arms outstretched towards one another; and the ‘Peace Bridge’, a two-year-old pedestrian walkway that carries residents from shore to shore.

All of these initiatives have opened the doors to dialogue, allowing the Irish to use their greatest gift – that of the gab. Communication leads to compromise, respect and trust – all of the key ingredients in a successful relationship. Time will do the rest.

As such, one can already sense the anger fading here, and a new identity emerging.

The process is, for Derry, a coming of age, and for the first time in years it has found peace.