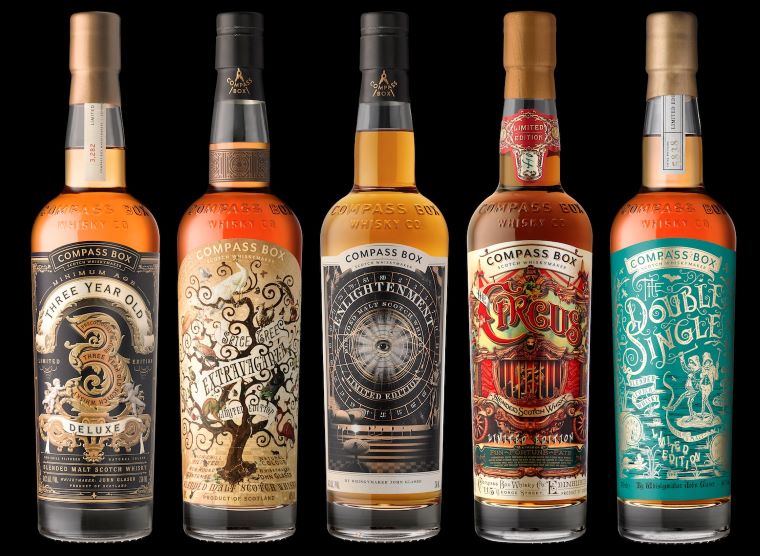 It has been six years since I last wrote about the Compass Box Whisky Co. for Celtic Life International. With the plucky London based “Whiskymakers” celebrating their 20th anniversary this year, it seems like an appropriate time to revisit one of my favourite whisky companies.

In a world obsessed with Single Malt Whisky, Blended Scotch Whisky continues to suffer from the stigma of the dreaded “B word” – Blends. The Blended Scotch industry reigned in the latter half of the 19th century and throughout the 20th century. However, the last two decades have belonged to Single Malts. Blended Whisky is far from done, however; it continues to dominate sales in terms of sheer volume and, recently, consumers have been thirsting for interesting Blends. Much of the credit for this must go to Compass Box, and their esteemed impresario John Glaser.

I have known John for more than ten years and I have been a fan of his, and his creations, for even longer. Compass Box has been pushing the boundaries of Scotch Whisky for two decades, starting with their first ever release, Hedonism – a Blended Grain Whisky that is a marriage of at least two different Single Grain Scotch Whiskies. Grain whisky is lighter, more delicate, and cleaner than malt whisky, owing to how it is made. It is often the base, or filler, for more commercial Blends. However, that is not the case with Compass Box, where grain whisky is an accent, used to add delicacy and decadence. Hedonism is soft, elegant, and sinfully decadent, hence the name. Whisky drinkers weren’t even drinking Single Grains in 2000, let alone Blended Grains, and this is where John chose to make his mark and announce his arrival. 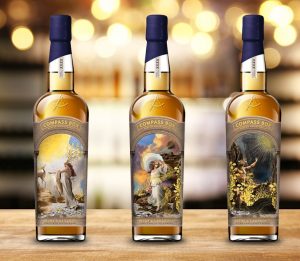 John is one of the most unlikely leaders in the Scotch whisky industry. A native of Minnesota, he studied winemaking and literature before taking a marketing job with Johnny Walker, a position he thought would be temporary. The job took him to Scotland and eventually to London, where he worked with Diageo’s blending team. He had always hoped to make his way into winemaking but fell in love with Scotch whisky and the art of whisky-making. Over time, his passion outgrew the vision of his employers; John approached Diageo with a proposal to create a range of boutique blended Scotch whiskies, but they didn’t share his enthusiasm. So, he struck out on his own.

Hedonism was followed up with Asyla (a proper Blend), Eluethera (a Blended Malt), and then his next big hit – the Peat Monster. I remember the first time I tried the Peat Monster; it was smoky and peaty, but not quite as intense as Laphroaig or Ardbeg. Most importantly, it was elegant and complex. That has been the signature of Compass Box whiskies over the past 20 years – “a forward-looking approach and an unrelenting desire to create quality.” They have experimented, pushed boundaries, challenged tradition, and ruffled feathers – as they did most famously with the release of the Spice Tree.

Their thirst for the art of whisky-making is what has endeared them to legions of fans, including yours truly.

One of the highlights of my time in the whisky industry was the creation of my own bespoke Compass Box Blend to celebrate the 25th Anniversary of my store, the Kensington Wine Market, in 2017. I didn’t merely select a cask or approve a bottling – I actually played a roll in the creation of something unique, the Compass Box Kensington Wine Market 25th Anniversary Blend. During the year it took to dial in the recipe for its creation I had the privilege of being a whisky-maker – certainly a career highlight!

Compass Box Whiskies are found more widely around the world today than in the early days. Hedonism, Spice and Peat Monster are still available as part of a large stable of the company’s unique creations. Their limited annual releases are the most sought after and this year’s 20th anniversary spirits will be no exception. The first is Rogues’ Banquet, a superb tribute to both their many unique whiskies and their equally distinct patrons. In their words, “When we conceived the idea for Rogues’ Banquet last year, we felt that a collection of our favourite Compass Box personalities and an opulent liquid would be the ideal means by which to begin our 20th anniversary celebrations. Rogues’ Banquet is made for the gourmands and the hedonists who have accompanied us for the last 20 years.” ~ Story by Andrew Ferguson