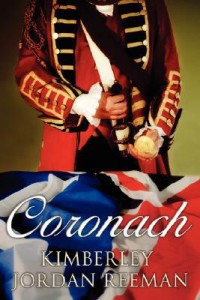 Kimberley Jordan Reeman was born in Toronto, Canada, and holds degrees in English literature and journalism. She worked in Canadian radio and publishing before her marriage to English author Douglas Reeman in 1985. Her debut novel, Coronach, is a historical epic of the eighteenth century, spanning forty-four years and three generations, and is set in Great Britain, the Caribbean, America, and France on the eves of their respective revolutions. Recently Celtic Life International spoke with the scribe about the book and other things literary.

What inspired/motivated you to put this book together?
I’m a fifth-generation Canadian on my father’s side, and my grandfather, whose memories went back deeply into Toronto’s colourful history, used to tell me stories about “Mackenzie and the hanging tree”. William Lyon Mackenzie was not only the first mayor of the newly incorporated city of Toronto, but also a gadfly journalist and fiery politician who led the ill-fated Rebellion of 1837 in what was then Upper Canada. When I was twelve I stumbled on a biography of Mackenzie called The Firebrand by William Kilbourn in the school library, and I must have read that book about eight times before I bought my own copy. And it contained the intriguing lines, “Both William Lyon’s grandfathers were of the clan Mackenzie. Both fought with their chieftain and Bonnie Prince Charlie in ‘the ‘45’.” That was enough to send a geeky kid who loved history and who had never heard of the ’45 straight to the encyclopaedias  in our rec room to read everything on the subject, and then to the library, and then, years later, to Scotland. And the more I read, the more I realized that behind this rose-ringed legend, the cherished story of the Jacobite rebellion which has been handed down for generations, there were many aspects of the truth which had never been told in fiction. Coronach wrests that legend from the entangling myths and clichés and sets the facts within the context of a century of war and catastrophic climatic upheaval, and examines why it all happened, and why it was all so inevitable.

Did it come together quickly or did you really need to work at it?
Tolkien said of The Lord of the Rings that “the tale grew in the telling”, and I know exactly what he meant. It was an organic process. It could not have been written quickly. It needed time to reveal itself. I wasn’t creating it, although I was the instrument of its creation; it was as if it was being given to me, and when I needed to know something, that piece of information or that book or research resource miraculously became available.

What was the most challenging aspect of the process?
Keeping the faith, having the discipline to write in my study with my back to the light of a summer’s afternoon, sustaining a narrative over a period of years… and I mean the years of my life, not just the span of the story. But it was never a challenge, and there was never any question of not being utterly committed. It’s what I do. It’s what I am. I write, and that’s as much a part of me as the colour of my eyes.

What was the most rewarding part of the process?
To feel the book alive under my hand, the words speaking themselves in my mind and flowing from the nib of my pen, and yes, I write in longhand; to hear the characters’ voices, to see them, as real as if they were standing by my desk. To be completely lost to the world because I was in another dimension, another time, with them, and to realize when I finished for the day that four hours had passed without my noticing.

How did you feel when the book was completed?
Drained but uplifted, because I knew I had served it as well as I could. As if I had composed some mighty symphony and brought it to the only possible conclusion.

What has the response been like so far from critics and readers?
People have told me they couldn’t put it down, that they’ll never forget it, that they’re recommending it to their friends, that it’s changed their view of the ’45 and of Scotland forever. That’s wonderfully gratifying. The worst criticism that’s been levelled at it is that it’s “dark”. I offer no apologies for that. My job as a novelist is to confront the truth without flinching, and Coronach does not compromise. It is a novel about the human cost of war, and it is the truth. It is what happened. And we ignore the truth at our peril.

What’s next on your creative agenda?
I’m currently researching the fall of Singapore to the Japanese in the last war, and the aftermath. When my husband took me to the Far East on our honeymoon, many years ago, it just blew me away. The ghosts are there in Singapore and Hong Kong, if you look for them. And that story, too, is haunting and terrible, and seldom told.

What made you want to be a writer?
I was born a writer; I don’t think I had any say in the decision. I told my brother stories before I could read. And when I learned how to print, I started writing them. I’ve never stopped.

What do your family and friends think of your vocation?
Nobody ever thought it was weird; it was just Kimmy tapping away at her second-hand typewriter in her bedroom into the small hours. My mother was my constant encouragement, and I wish she’d lived long enough to read Coronach . My dad used to ask me how the book was going, even when he was dying. My brother never doubted his kid sister would move on to a bigger audience (with a bigger story!) one day. And it was just fate that I should fall in love with my favourite author, Douglas Reeman, through the Nelsonian novels he writes under his pen name of Alexander Kent, and that we should meet, and marry, and live and write together now like the soul mates we are.

What makes a good book?
A good book opens up a world for you. You live it as if it was real, you finish it with regret, and you tell everyone you love, “Read this. You’ll never forget it.”

What are your thoughts on the state of Celtic literature today?
Celtic culture, on this side of the Atlantic anyway, is alive and kicking with irrepressible power, and that includes the Celtic peoples of France and Spain. And I would say Celtic literature, particularly Irish and Scottish, has experienced a renaissance over the past twenty years or so, with dedicated publishers and governments committed to keeping the languages viable. The only danger is a tendency to over-romanticize the past, which seems more of a trend in North American writing. Celebrate the culture and honour the past, yes, but know the truth of your heritage. History is never black and white; it is many shades of grey.

Are we doing enough to preserve and promote Celtic culture?
I think so. The blood is strong and the traditions are powerful, and Canada in particular respects that uniqueness.

What can we be doing better?
History must never be forgotten. Ours is a country that was explored, charted, settled, fought for and governed by Celts. We need to know their story. We need to know where we came from. Canada’s past is as wild and bloody and fierce and legendary as any other nations on earth. That history must be taught to our children. It is the essence of who we are.