Crimes Against My Brother 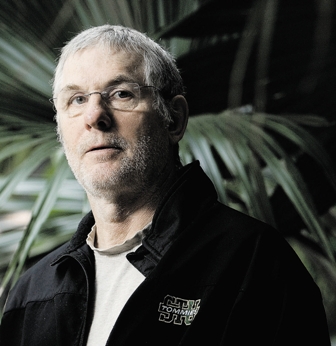 Chatting with David Adams Richards is a little like reading one of his books; it requires attention and focus – you don’t want to miss a word.

“It’s been a hard year,” sighs the sixty-something scribe over the phone from his home in Fredericton, New Brunswick.

Richards isn’t referring to his health – he is feeling strong again after a minor setback two years ago. Nor is he talking about his family life or friendships – all of which, he says, are solid. Likewise, the writing continues to go well – he has already finished two more books which will be released in the next year or two.

“I’ve been up to fish the river a couple of times,” he shares, alluding to recent outings with his son and with friend and fellow writer Wayne Curtis. “We haven’t had much luck at all.”

Ironically, it is this river – the mighty 250 kilometer long Miramichi River, with its many branches and tributaries, which opens into the Gulf of St. Lawrence on the province’s picturesque eastern coastline, by the small town of the same name where Richards was born and raised – that has been a fountain of good fortune for the author.

As with many of his previous works – including 2000’s Giller Prize winning Mercy Among The Children – the working-class, Irish-French-Mi’kmaq mill-ville is the setting for his most recent novel, Crimes Against My Brother; the story of three young cousins who make a blood-pact with one another.

“It took me the better part of three years to write this book,” explains Richards. “I knew where I wanted to go with it, and what themes I wanted to explore, but I also allowed the story and its characters to reveal themselves to me over time.”

Luckily for readers, what emerged was a complex and compelling tale of trust, betrayal, gossip, murder and moral ambiguity.

“I started with the idea of the three boys and this pact that they make with each other. Over the course of the story, we see how this bond unravels – and eventually fails entirely – through a series of choices that they make, the consequences of those choices, and the actions of the other characters.”

Richards credits two central catalysts from the book’s fictional locales of Bonny Joyce and Clare’s Longing for pointing the narrative in the direction it needed to go.

“Lonnie (Sullivan), who is driven by power and greed, lords over these poor kids, manipulating them, exploiting them, and dividing them against each other for his own personal ambitions. And his protégé, the beautiful young temptress Annette (Brideau), also has a hidden agenda that affects everyone around her.

“We all know people like Lonnie and Annette,” continues the author. “People who act like God, twisting and turning morality as they see fit, as it suits their interests. Often, and as is the case with this story, their selfish acts can lead to terrible results.”

Richards’ ability to address bigger themes in a small-town setting is a hallmark of his writing.

“For me, it makes a great stage for the human drama. That said, folks from that part of the world are really no different from folks anywhere else – I lived in downtown Toronto for over a decade, and people there were just as inclined to gossip as people from the rural parts of the country.”

Despite the dark themes and thoughts, Richards’ says that Crimes Against My Brother is a hopeful story and one of triumph.

“It’s about the power of the human spirit – over adversity, over hardship and pain, over sadness and sorrow. It is when we struggle with things like trust, love and betrayal that our better angels have the chance to take flight.”