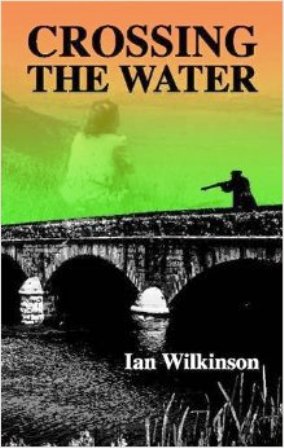 A former child psychologist, Scottish author Ian Wilkinson has hit the mark with Crossing the Water, the story of two young boys coming of age during the Irish rebellion years. Recently we spoke with the author about himself and his book.

What are your own roots?
My ancestors were farmers, lead miners and quarrymen from the northern Pennines, which rise to a bleak moorland wilderness adjacent to the Scots border. British Celts were driven into the dales, and Vikings came later; farmers here used to count their sheep in Old Norse. My great-grandfather was a large red-headed Scot who bequeathed red beards to me and my brothers. I respond to Celtic music much as I do to the sight of Pennine moors; my wife Sheila is half dales, half Irish.

What inspired you to become a writer?
My mother would say I loved stories so much that she taught me to read to find some peace. My uncles told stories to the children at parties, so producing my own seems natural – especially since I can’t sing and I’m tone deaf. As a child, stories and films like ‘The Treasure of the Sierra Madre’ inspired me. A storm in the final scene blows all the gold dust away into the desert, leaving the two survivors with nothing but their deep friendship for each other. Which is the real treasure? That film gave me a rather wonderful lesson at a very early age.

Are they the same reasons you do it today?
Yes, deep down I was always drawn to this. As a psychologist I helped other people to tell their own stories and used other stories to help them see themselves and their worlds in a different way. Stories can be very influential; the best way to de-glorify war for young people is to make a class read ‘All Quiet on the Western Front’ or watch the opening half hour of ‘Saving Private Ryan’.

What are the challenges of the profession?
For the individual writer, it’s a very solitary activity. For the profession as a whole, the youth and celebrity obsessed society we inhabit makes it difficult for new voices to be heard. If a young, attractive J K Rowling had to be fished from a bin by a junior assistant, what chance does a potato-faced middle-aged guy in a cloth cap from the back of beyond have?

What are the rewards?
At this stage, I’m tempted to say just being read, that’s enough. But you do want to know that readers have connected to your story enough to give you feedback; and then you just hope that the feedback is positive enough to make you continue.

How have you grown as a writer over time?
Writing non-fiction gave me the basic skills you need for a long novel; researching the background, organising and editing. It wasn’t all helpful; scientific writing is the best sedative on the market! But psychology also made me better at seeing the world through other peoples’ eyes, at understanding odd personalities, and describing the ups and downs of relationships.

Is your creative process more ‘inspirational’ or ‘perspirational’?
I need inspiration to map out the bones of a story and then a mixture of both to fill out the flesh. An outline can pop into the head quite quickly, but it must be inspiring enough for several years work. And at the end, there’s a lot of sweat and polish.

What makes a good book?
A good book has to connect and resonate; the reader has to empathise with the characters, to feel their hopes and sorrows. As a historical novelist, I also want to make the past come alive, sit up, and talk to the reader… and entice them to follow.

What motivated you to write ‘Crossing the Water’?
When I got to know Sheila’s father I got him talking about his childhood in Ireland, aided by a good Irish whiskey. I discovered he had not only met Michael Collins as a small boy in his uncle’s pub, but later he’d been unwittingly caught in the middle of one of the first cross-fires of the war of Independence. It was a somewhat jaw-dropping moment. All of that generation were modest, often reluctant to tell you what they’d been through in their childhood, through the great depression, and the Second World War. They would tell their story in a matter-of fact way, as if was nothing, and you’d be thinking, my God… so, the story is an elegy to that lost generation. From an Irish perspective, they won their War of Independence but then the children of independence often had to face the pain of emigration. And from a British and North American perspective, those ‘fighting Irish’ became part of a generation whose sacrifice kept us free in World War Two.

What did you learn during the process?
I learned to use a lot of oral history to give the story authenticity. Learning how the Irish speak English by reading the stories, plays and diaries of Irish writers and playwrights of that era was a revelation. The Irish use English as if they were still speaking Gaelic so that even now you don’t hear the words ‘yes’ or ‘no’; they use more simile and metaphor, more elaborated imagery and description, to make their use of English lyrical and poetic. They spend words like water, and make beautiful patterns. I hope that some of that has rubbed off into my writing. Finally, imagining the details of life for that generation was at times very moving and often left me overwhelmed with respect for what they had endured.

How did you feel when the book was completed?
Anxious… very anxious indeed. I knew it was a good story but I needed feedback from Ireland (especially about the dialogue) from Weardale, and America. Had I done it justice?

What has the response been like so far from those that have read it?
The best response I’ve had was from one of my relatives: “I never really understood what my father went through; it was quite traumatic, but very therapeutic.”  The second best was from the first member of the public to read it (he’d borrowed one of the pre-publication copies). He buttonholed me in a pub to buy his own, telling me he’d read it in two days and couldn’t put it down. So generally the feedback has been better than I could have hoped for; it seems to resonate in different ways for different people. The main criticism is that some people find the story complex, as it shifts between three perspectives.

What are your thoughts on the state of Celtic literature today?
I can’t comment on literature in Gaelic, but that written in English is thriving. Why does Ireland produce so many popular writers like Colm Tóibín? The English language has an enormous range of words; perhaps while other writers look for precision and clarity amidst a sea of potential meanings, the Celtic writers are more willing to play with the language, a result of the deep structure of Gaelic and how that has passed into English.

What’s next on your creative agenda?
Another time, another place… the eastern Roman Empire has been airbrushed from history. In ‘The Soul Trader’, the voice of this Empire is an old man, once rich beyond his wildest dreams, now old and bitter, imprisoned by his own family (who have taken control of his vast fortune). And the voice of his nemesis is a young idealistic French Christian, recounting the disaster of the Fourth Crusade…