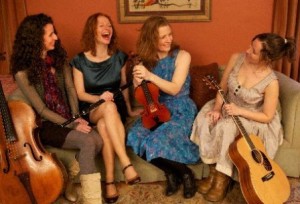 The inaugural Crossroads International Celtic Festival begins tomorrow and features some of North America’s finest musicians at a variety of venues across western Maine. Recently we caught up with one of those musicians, Liz Simmons, whose band Long Time Courting will be appearing at the five-day festival.

What are the group’s roots?
We are all American but grew up steeped in traditional music as well as many other styles of music.

When and why did you start playing music?
We all started playing music as children– it was an integral part of all of our childhoods. We all had parents that encouraged musical study and/or played music themselves, so it just sort of happened organically.

Are they the same reasons you still do it today?
In a way, music either continues to take hold of you or it doesn’t, and for us it did! We are all so grateful for the opportunities we have had, and that our parents and mentors valued and encouraged not only the individual and academic study of music but also the involvement in community-oriented traditional music.

What are the challenges of the vocation?
It can be very challenging to balance a career in music with family demands, as you can’t ever really “go home” from work. We all do a fair level of managing alongside the performing side of things, so there is always work to be done– and we are often on the road.

What are the rewards?
We wouldn’t trade it for anything– the variety, adventure, community, creativity, the music itself– it’s all very rewarding.

When did the band come together?
About four years ago Long Time Courting was formed by four women who worked a lot with men and wanted the experience of an all-women band. And now we’re hooked!

Why Celtic music?
We’ve all been steeped in multiple Celtic styles– our flute player has been deeply immersed in Irish flute for a couple of decades and our fiddle player Scottish music. Our cellist and myself (on guitar) also have strong backgrounds in Irish and Scottish music, but we also bring our Americana and jazz sensibilities to our sound. Drawing from music that is at its heart community oriented and social is ultimately what is rewarding. The fact that we can develop funky arrangements for our stage shows and push the envelope but then still sit down with a bunch of trad players and just play tunes together or sing old songs allows us to explore the new but maintain a strong connection to the tradition as well, and know the difference.

How would you describe your sound today?
Our tagline is “traditional and original Celtic Roots music” but what that means and what we make of it is what’s fun about the music. We each bring something different and unique and we all love writing new material, creating counter melodies, and arranging. It is “Celtic Roots” but it has influences from the Americana, classical, blues, folk, jazz and rock worlds too.

Where do you typically perform?
LTC has toured throughout the northeastern part of North America (as far north as Montreal and as far south as Washington DC) and we have also been out to the mid-western plains states. We have yet to take this band over to Europe (although we have all toured there with other projects) but it is not out of the question for the future!

What is the response like from audiences?
Generally audiences seem to dig the energy, the humor and the harmonies. LTC has a great time together and we like to think that this joy and inspiration is contagious!

What makes a good song?
I think a song is considered “good” when the audience can connect to it, whether it be a catchy chorus or a sentiment or even an instrumental lick that is somehow evocative. The songs that have stood the test of time are the ones that seem to capture some essence of humanity– for better or for worse.

Is your creative process more ‘inspirational’ or ‘perspirational’?
A bit of both! The inspiration is important when brainstorming, but then we have to put the work in.

What do you have on tap for the rest of 2013?
We are heading down to Celtic Classic in Bethlehem PA at the end of September and hitting Wilmington Delaware (The Green Willow) on the way, and then in November we are doing a little tour throughout upstate NY.

Is enough being done to preserve and promote Celtic culture generally?
A lot of festivals and venues are promoting it by featuring a lot of Celtic Rock bands, but few of them feature acoustic bands that are more closely tied to the traditional music. Thank you to Phill McIntyre for putting together the Crossroads International Celtic Festival that really features and highlights acoustic trad!

What can we be doing better?
Seek out those musicians who have deep connections to traditional music and feature them in festival and concert settings. There, we’ve said it!