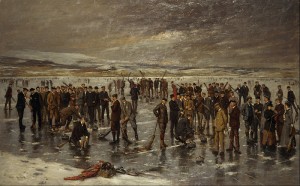 Now Jones, Arsenault and Kelly are reuniting and joining forces with Jennifer Baxter. They have one goal in mind – the 2014 Olympics. None of them has curled in the Olympics and they are determined to qualify. “I think we just felt we had more game in us,” shares Jones.

“You can always learn something new about the game,” continues the Canadian Curling Hall of Famer. “Somehow the sport can never let you own it totally.”

Curling involves sliding polished granite stones across ice towards a target area. It’s often called the roaring game because of the sound the stones make as they move over the pebble (water that’s been applied to the ice).

The exact origins of curling are unclear – some historians have linked it to the Low Countries of continental Europe – but all seem to agree that it was Scotland that fostered curling and introduced it to the world.

“I always joke that the Scots invented two sports – curling and golf – that would intrigue you, captivate you and hook you in such a way that you’re never good enough at either,” says Jones.

In his book, History of Curling (1890), John Kerr concludes that curling is “Scotland’s ain game”. Indeed, the oldest known curling stone, the Stirling Stone of 1511, was found in Dunblane, Scotland, according to Library and Archives Canada; and the oldest recorded curling challenge took place at Scotland’s Paisley Abbey in 1541.

The World Curling Federation (WCF) adds that it was Scotland’s Grand Caledonian Curling Club (now the Royal Caledonian Curling Club) that first formulated the Rules of Curling; and that Scots exported the sport to many countries that had cold enough climates for lochs to freeze – from Norway and Sweden to New Zealand and the U.S.

The 78th Fraser Highlanders are said to be among the first to introduce curling to Canada, more specifically to Quebec, after they joined Wolfe’s expedition in 1759.

“Why wouldn’t the soldiers have curled?” asks Reverend James Armour. “They must have found the long winters hard, and it was before skiing was invented, so it seems natural.”

Reverend Armour is a member of the Royal Montreal Curling Club (RMCC), North America’s oldest-running curling and sporting group. He knows the club’s chronology well since he saw to it that its history book be finished after the original author, Donald Wallace, passed away. (As a result, The First 200 Years should be released this month.)

The RMCC was founded in 1807 by 19 Scottish immigrants and one gentleman with both Scottish and First Nation blood. The founders first played on the Saint Lawrence River.

The RMCC is just one expression of Canada’s love of curling. Estimates put the number of Canadian curlers at between 1 million and 1.5 million.

Canada has taken Scotland’s roaring game to heart, so it is apropos that both nations are leaders in the sport today. The WCF 2011-2012 world rankings for men’s teams place Canada first and Scotland/Great Britain second. Among female teams, Canada and Scotland/GB are ranked second and seventh respectively.

Both countries also seem to value the practice of stacking the brooms – a curling expression for socializing after a game. Jones explains, “When you go to a curling club, it’s a gathering place, I’m sure just as it was when they first brought the game to the lakes here.”

In fact, for some clubs, socializing was and is mandatory. According to the Quebec Thistle Council, after the RMCC was established in 1807, members were required to meet each fortnight at a selected coffee house (usually Gilles Tavern, near Molson’s Brewery) after a match on the Fleuve St. Laurent.

Most would agree that, like curling itself, that’s a tradition worth preserving.