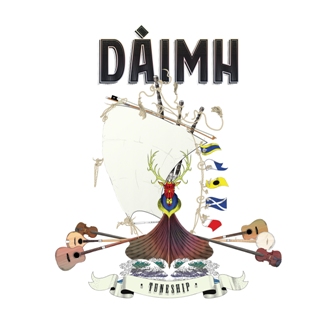 Celtic quintet Daimh has a great new recording and tea towel out. Er…wait, a tea towel? That’s right: download the band’s newest CD, Tuneship, and they’ll throw in a limited edition tea towel. “A tea towel and a download,” says band member and piper Angus MacKenzie. “Everybody needs a good tea towel and ours are the best.”

If that sounds a little off-beat, then clearly Daimh isn’t your run-of-the-mill group. A self-declared “Celtic super-group,” the band combines the far-flung influences of California, Cape Breton, Ireland and Scotland. MacKenzie says the idea is that Daimh represents the kinship among the Celtic diaspora. Music and song ties it all together.

Since its first album in 2000, Moidart to Mabou, the band has built a reputation with its urgent pipe and fiddle tunes. MacKenzie says the music runs the gamut from high-energy and fast flowing songs to subtler, more personal pieces. MacKenzie calls his band mate, Gabe McVarish a great fiddle player whose style suits MacKenize’s piping. “We’ve added the banjo and mandolin playing of Damian Helliwell to the group and he’s got a great groove to his playing and underpinning the whole sound is Ross Martin’s driving guitar playing.”

The newest addition to the band is Griogair Labhruidh, who is well known as a fine Gaelic singer in both Scotland and Ireland. In the release for Tuneship, the band comments, “The depth of understanding and passion in Griogair’s singing further highlights the band’s roots in their beloved West Lochaber and North Argyll, yet blends perfectly with their cutting-edge compositions and contemporary arrangements to create a consummate snapshot of Gaelic music in today’s Scottish Highlands.”

Tuneships marks a couple of changes for the band, both in personnel and in their approach to the music. A couple of the former members worked full-time and found it increasingly more difficult to get away to rehearsals and gigs, leading to a line-up change, including the addition of Griogair, whom started out doing a few shows with the band. “He’s really talented,” MacKenzie says. “He studied jazz at Strathclyde University, plays guitar, small pipes and highland pipes and has added the Uillean pipes to his repertoire, which he plays on one of the songs on the album.”

MacKenzie notes this is the first time the band has written a recording entirely composed of its own compositions. They’ve also released Tuneships on their own recording label, Goat Island Music.  “It’s taken a bit more time and effort to get an album out there, as opposed to doing it with a label,” MacKenzie says, “but I think it’s a bit more rewarding and means we’re in control of the product.”

The band members write the music on their own and then take them to the group, where they work together on the arrangements. MacKenzie and McVarish wrote together for the first time, working on original music the Island of Raasay inspired. “It was a new experience for both of us, but I think that it turned out really well,” MacKenzie says.

The biggest challenge facing the group is the Scottish weather. Two of the members live on the Isle of Eigg and MacKenzie lives on the Isle of Skye. To get together, they ferry over to Mallaig, which is a couple of miles from where their guitarist lives. As MacKenzie dryly notes: “In the winter, boats and the weather can be a challenge.”

MacKenzie himself originally hails from Mabou, Cape Breton, but now calls Portree home. His mother was a Rankin from Mabou and his father from South Uist in the Western Isles of Scotland. McKenzie began piping at a young age and ended up going to the Gaelic College of Celtic Arts and Crafts in Cape Breton. While MacKenzie’s parents didn’t play music, they emphasized the Scottish culture in the household and spoke Gaelic as the first language.

As MacKenzie got older, he began to listen to CDs by such groups as the Battlefield Band, Wolfstone and Ossian. “They really opened by eyes and ears to what you could do with the pipes,” he says. MacKenzie notes he never planned to become a full-time musician and originally moved to Scotland to study Gaelic at Sabhal Mor Ostaig on the Isle of Skye, where he ended up meeting has band mates at various sessions and dances along the west coast.

Next up for 2014 are a number of festivals with the band as well as project they’re calling DaimMor: The Big Band, which will feature an expanded line-up of percussion, double-bass, double fiddles and brass. No word on what the tea towel design for that project will look like.