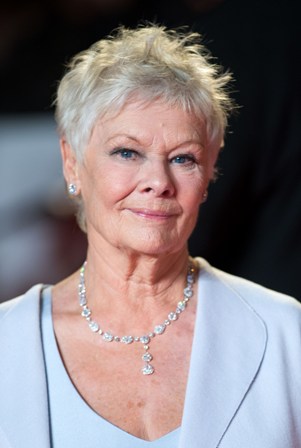 This much is certainly true: for a woman of 78, her work load over the past decade has been unrelenting, both on stage and screen. Her most noticeable role is as M in six James Bond films, from Tomorrow Never Dies to Skyfall, in which she was dramatically killed off. Those 007 productions represented quite a shift from what previously she’d been renowned for: UK comedies, terrestrial dramas and stage work.

What was it about the role that appealed?  “There were three reasons. The first is that they asked me. Secondly, it was the first time that M was a female. And thirdly (and most importantly) Michael said to me ‘I find it irresistible that I shall be living with a Bond girl’.

Subsequently, the Bond films introduced Dench to a whole new generation of cinema goers, and in the process she became something of a veteran pin-up among some young enough to be her grandson. It is a status she playfully embraces. “I have fans who are young men of my grandson’s age, up to about middle to late teens, and that’s wonderful. Imagine being a pin-up, at 73, to the teenage boy crowd? And you know what is even better – the fact that those lads might find out that I am also a stage actress, and that they then might be tempted to see what the theatre is all about. I admit it – Bond, for me, is a ‘fishing trip’ for live audiences”.

This line is only half a quip: Dench’s true work remains in the theatre, where she made her name. From her debut performance at the Liverpool Royal Court with the Old Vic Theatre in 1957 as Ophelia in Hamlet, Dench established herself as one of theatre’s most significant actresses with the National Theatre and the Royal Shakespeare Company. And, despite the late-career film flourish, the stage remains her calling.

“My only passion is the theatre – that’s what I really, really love. You get the chance to have another go the next night and do it again – it may end up being worse, but definitely different, and always to a different audience. The audience informs you of absolutely everything. An American student said to me, ‘Does an audience make any difference?’ And I said, ‘If an audience doesn’t make any difference, I am staying at home. I am putting my feet up the chimney.’

The burning desire that made her a success drives her still – “I cannot bear apathy, the ‘I couldn’t care less… whatever’ attitude in anything. I like people who are wildly optimistic; that’s the way I approach life and living. I am an unbounded optimist, even at nearly 80 years of age.”

But after such a distinguished, eclectic and successful career, when she looks at herself in 2013, has Dench achieved everything she wanted to when she started out in 1957? “No. And I don’t expect to. There are a few things next year,” she laughs. “The other day someone said, ‘What kind of play do you want to do?’ And I said, ‘I want to be in a play where I am an Afghan woman who learns to walk the tightrope and in the last act turns into a dragon.’ I’ve not done that yet, so on we go…”