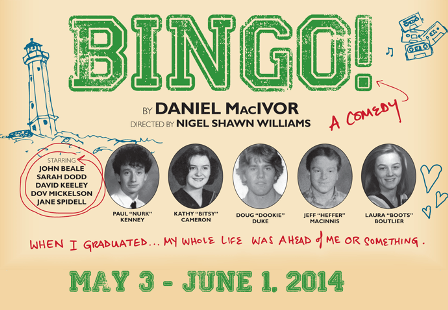 Nova Scotia playwright Daniel MacIvor is no stranger to the pages of Celtic Life International. Here, the award-winning writer opens up about Bingo!, which opens tomorrow night at the Factory Theatre in Toronto.

What inspired you to start writing?
I was writing from time I could hold a pencil. Apparently as a toddler I would crawl on the floor with a pencil in my hand and find old text books and scribble in the blank spots at the end of chapters. So I guess it was somehow part of my DNA.

What else inspires you today?
The small things inspire me. Not the grand gestures, not the huge movements of the world. The kindnesses strangers show one another, the unexpected connections we find with each other. The beauty in the banal, the simplicity at the centre of all the chaos.

Is your creative process more ‘inspirational’ or ‘perspirational’?
Both. It starts as inspiration and then the journey to the “why” of that inspiration brings on the sweat.

How has your Cape Breton roots influenced your work?
I think we’re all storytellers in Cape Breton, and I think that is basically true of any island people. When the boarders of your world are not political or simply lines on a map, but rather the end of the land and the beginning of the ocean, we see the world in a differently.  We understand how the light exists in the darkness and we look inside ourselves and into our own stories in a different way than the rest of the world.

What inspired you to pen Bingo!?
I had been working at the Banff Centre during a five week residency in a cabin in the woods. I was finishing a draft of my play “Arigato, Tokyo” a rather heavy romantic tragedy influenced by my time in Japan and the fundamentals of Noh Theatre. I managed to get through the draft and still had a week left in the residency. As a kind of exorcism of the darker work I had just been immersed in I felt like I wanted to work on something lighter, something that was no-holds-barred comedy. I remembered a conversation I had with my old friend Steve MacDonald and his partner Debbie Corkum in their kitchen in Cape Breton about trying to make work for an east coast audience that would really speak to them in a lighthearted but true way and I had an idea about a thirty year class reunion and I immediately thought of the title Bingo!. The next morning I came into the kitchen and Steve had already made the poster and put it up on his fridge. It felt like something real already. So with the extra time in Banff I went back to that idea and within the week I had the first draft of the play.

What has the response been like from audiences/critics to the work?
So far so good. The critics have loved it in its first production with Mulgrave Road Theatre and in its second production at Praire Theatre Exchange in Winnipeg. And audiences have been able to see themselves in the play. People in their forties and fifties see themselves and people in their twenties and thirties see their parents. I think people are hungry for comedy in the theatre, something that makes them laugh but at the same time allows them to reflect on their own experiences.

Does that matter to you?
Critical response matters less and less to me. It’s taken me a long time but I’m confident enough in my work and my motives that a negative review doesn’t crush me like it once did. The critic is doing a job and I understand that, every play isn’t for every person. And when one thinks about how many plays a critic must see in a season it’s pretty impressive then can keep any kind of perspective at all. For me it’s all about the audience response. I don’t even need to talk to the audience to know if the play working, being in the room with them you can tell what’s landing and what isn’t. That’s a big part of why I continue to rewrite after the show has opened and is running. Very seldom would I make a change in a play based on a review but often based on an audience reaction.

How has the production evolved since last year’s performances in Halifax?
Well, I directed the show twice in Halifax and I did a lot of work on the script during that time. First we were on tour with Mulgrave Road Theatre out of Guysborough and then the re-mount was part of the Neptune Theatre season in Halifax. Both productions did very well, it had the highest attendance of any play at Neptune in the past six years. The greatest thrill was having the play produced at the Savoy Theatre in Glace Bay and my whole family had a chance to see it. My production was very straight-forward – a simple hotel room in a realistic style. At Factory the set designer has taken a different approach – more stylized – so that’s something new.

What’s it like re-mounting the show in Toronto with a new cast?
I guess I would say that the challenge for the actors is getting the balance of cynicism and sentimentality right. That’s part of our DNA in Cape Breton but in Upper Canada it’s more difficult for people to understand that you can tell someone to shut up and call them an idiot and that doesn’t mean you don’t want to snog them.

What can audiences there expect during the run?
Hilarity and heart-warming-ness I’m hoping. And that their first response upon leaving the theatre would be “Let’s see that again!”

Are the audiences different in Toronto from Nova Scotia?
Uh … yeah. In Nova Scotia people arrive at the theatre prepared to give the show a standing ovation. You’d really have to screw up royally not to get that. In Toronto people often come in with a sense of “Okay so my time is valuable and parking is expensive so this better be worthwhile”.  This is a very particular type of play, a particular genre, it’s a feel-good comedy for the most part. I didn’t write it to prove I was sophisticated or smart, I just wanted people to have fun. From my experience people are generally more interested in having fun in Nova Scotia – remember, our unofficial weekend begins on Thursday.

What’s next on your creative agenda?
I’m doing a new solo show at the Magnetic North Festival in Halifax called “Who Killed Spalding Gray?” and I’m working on a screenplay for Bruce McDonald called “Nineteen Seventy Something” – it’s set in 1976 in Nova Scotia and it’s about two teenagers hitch-hiking from Antigonish to Sydney.

What are your thoughts on the state of theatre in Canada?
The theatre will never go away, the way it is produced and the way it is sold will change – for example a recent study says that while theatre subscriptions sales are down nationally single ticket sales are up.  I think that this is a good thing. I think it means that people are interested in seeing plays that speak to them rather than buying packages of plays that try and speak to everyone. This is good for all of us, for the audience and the artists. It means better work and a more satisfied public. But no matter what there will always be audiences looking for connection in the dark rooms of the theatre.