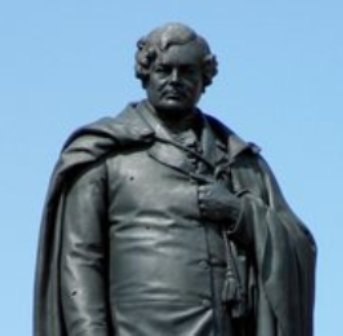 The grandest boulevard in Dublin, originally called Sackville Street, was renamed O’Connell Street in 1924. At the south end of that street, overlooking the a busy intersection and the River Liffey, stands a larger-than-life statue: Daniel O’Connell. In Glasnevin Cemetery, on the city’s outskirts, O’Connell is remembered with a round tower that dominates the graveyard. And at Derrynane, the estate he inherited in southwest Ireland, visitors can see the magnificent chariot in which O’Connell rode through Dublin, waving to the cheering thousands who had gathered to celebrate his release from prison.

O’Connell was jailed in 1843 when his non-violent “monster meetings” proved so effective that the authorities felt threatened. His profound commitment to nonviolence would inspire such figures as Mahatma Gandhi and Martin Luther King, who in the twentieth century would adapt O’Connell’s approach to freedom struggles in India and the United States.

O’Connell was arguably the greatest statesman Ireland had ever produced. But one century before the Dublin city fathers attached his name to their most splendid thoroughfare — or 96 years, to be precise — the man himself was fighting for his political life in the town of Ennis, 250 km to the southwest in County Clare.

Today, Ennis is a musical “boutique town,” population 25,000, situated on the River Fergus between Limerick and Galway. It is less than 20 km from Shannon Airport, and offers easy access to the Aran Islands, the Cliffs of Moher, and the Dingle Peninsula. In June, my wife and I spent five days there for all these reasons, but mainly because of Daniel O’Connell. I was researching a book about outstanding Irish and Scottish figures and I wanted to get a sense of the place where, almost two centuries ago, O’Connell made his first mark as a world figure.

By then he was forty-three. He had been born in August 1775 in a stone farmhouse whose ruins can still be seen at Cahirsiveen, County Kerry, 200 km southwest of Ennis. When he showed signs of being precocious, an uncle who owned an estate (Derrynane) stepped in to educate him. After studying in France, and narrowly escaping the violence of the French Revolution, O’Connell spent three years in London, training as a lawyer.

At a debate on the fate of Britain, he heard Prime Minister William Pitt speak and took note of the man’s “majestic march of language” — the way he used lower tones to end sentences and threw his voice to make himself heard at a distance. Inspired, O’Connell joined a debating society and began training himself as a speaker.

Now came a slow, steady climb to prominence. As a lawyer, he proved witty, incisive, erudite, theatrical, fluent in English and Irish, creative — soon enough, peerless. His forte, according to biographer Charles Chenevix Trench, “was the cross-examination of hostile witnesses.” With great good humour, O’Connell would coax and confide, “from time to time rolling his large, blue-grey eyes at judge and jury,” until he trapped the witness in a lie or contradiction, and nailed him to the wall.

Born and raised a Roman Catholic, O’Connell became politically active.  Ireland’s Catholics.had been subject to discrimination since England had gained control of the country in the 17th century. They were barred from holding public office or serving in the army. Members of the government had to be Anglicans, so that even Presbyterians — mostly Scottish — did not qualify. By the early 1700s, the Anglican ruling class, known as the Protestant Ascendancy, had enacted Penal Laws to ensure their own dominance over Catholics and Dissenters of all stripes.

By the early 1800s, some of the worst excesses had been rescinded. Catholics could serve in the armed forces or enter the legal profession, for example. Yet still they could not inherit Protesant land, own a horse valued at more than five pounds, become court judges, or be elected to serve in the British House of Commons, which had governed the country since the 1801 Union of England and Ireland.

O’Connell set out to change all this, and to bring about “Catholic emancipation” by democratic means. He insisted “that all ameliorations and improvements in political institutions can be obtained by persevering in a perfectly peaceable and legal course, and cannot be obtained by forcible means, or if they could be got by forcible means, such means create more evils than they cure, and leave the country worse than they found it.”

In 1811, well-known as a barrister, O’Connell established the Catholic Board to campaign specifically for Emancipation, or the right of Irish Catholics to become Members of Parliament. A dozen years later, he turned this board into the Catholic Association, a broadly focused organization that sought to improve the Catholic situation generally. Gradually, he gained a massive following and built a war chest to support pro-emancipation candidates standing in Ireland for election to the British House of Commons. Yet because a discriminatory oath of office demanded the renunciation of Catholicism, all of these propertied men were Protestants.

In 1828, O’Connell decided to seek the election of an Irish Catholic who would go to Westminster but refuse to take the reprehensible oath. When the 1828 by-election was called in County Clare, he anticipated that a prominent Catholic, an ally from that County, would contest the election. When that candidate withdrew, he agreed to stand himself — not out of personal ambition, he explained, but “to advocate a principle, which may in my person be vindicated.”

The election was to be held in Ennis. On Monday, June 30, 1828, after traveling day and night by coach from Dublin, Daniel O’Connell arrived at two o’clock in the morning. At the Court House a few hours later, his opponent, William Vesey Fitzgerald, gave a tour-de-force speech that reduced most of the audience to tears. As he rose to answer it, O’Connell — already considered the greatest Irish orator of the age — knew he had his work cut out for him.

O’Connell did not dislike Fitzgerald, a Protestant who supported Catholic Emancipation. But if he were going to win this election, he had to demolish him verbally. In King Dan, biographer Patrick Geoghegan shows how he did this with a speech that was “nasty, brutish, and brilliant, without doubt one of the greatest of his life.”

O’Connell charged that Fitzgerald belonged to a government that treated Catholics with contempt. He lamented that he could not rise in his chosen profession because he was a Catholic. He argued that Protestants could murder Catholics with impunity, and that Catholics were not permitted even to mobilize. Fitzgerald’s conduct was “barefaced and miserable hypocrisy.” The speech ended, Geoghegan writes, “with a volley of execration for the combined enemies of the Catholic cause” that had the crowd cheering, roaring, and laughing.

The formal vote began the next day and, with people pouring into the town from the countryside, lasted almost a week. When polling ended on Saturday, July 5, O’Connell had won with 2,057 votes to 982. The people had elected a Roman Catholic to enter the House of Commons.

In February1829, O’Connell went to London to try to take his seat as a Catholic member of Parliament. By now, the elected British government had accepted this idea. But King George IV was trying to prevent it. Finally, in April,  the emancipation bill gained royal assent. Because of a technicality — the bill did not become law until after the Ennis election — O’Connell had to get himself re-elected. This he did, unopposed, the following July. And when Parliament resumed in February 1830, he took his seat in the British House of Commons.

Having planted a flag on behalf of Irish Catholics, Daniel O’Connell became known as “The Liberator.” He would go on to fight many battles, and would even spend three months in jail for non-violent political agitation. But as biographer Charles Tenevix Trench observes in The Great Dan, “the reputation of this greatest of Irishmen deserves to rest not on what he might have done, nor on what he failed to do, but on his wonderful achievement in 1828, which raised his people’s heads and straightened their backs after generations of subjection and failure.”

In Ennis, where Daniel O’Connell changed the course of history, the Old Court House is long gone. But where once it stood we find O’Connell Square, which boasts a sky-high, 74-foot tower topped by a statue of the great man. A local historian, Jane O’Brien, sprinkles her daily guided walk around Ennis with anecdotes about O’Connell. The town’s main street, she tells us, which has taken his name, was once called Jail Street. And, this being Ireland, she takes us past a lively pub: Dan O’Connell’s. Here in Ennis, as in Dublin, the great man’s memory would appear to be cherished and protected.