DARK IS THE SEA 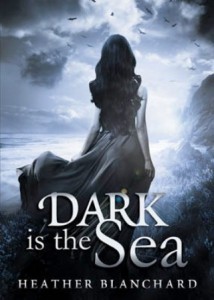 As an only child growing up in the Scottish Highlands, Heather Blanchard says it was easy to get carried away with her own imagination from a young age. Local folklore and ghost stories always intrigued her and influenced the type of books she read – and now writes.

Dark is the Sea is Blanchard’s first novel, which definitely contains elements of the author’s childhood and features a Celtic heroine. The book revolves around 18-year-old Rowan Munro who leaves London to return to Dorchay, the remote Scottish village of her childhood to try and unearth the source of her mother’s disappearance and of her own nightmares.

In Dorchay, she uncovers the buried secrets of her family and awakens a centuries-old malevolent force, the Hunter, who is intent on killing her and her family. To battle the Hunter, Munro must learn to harness new-found powers discovered with the help of an eccentric aunt.

Blanchard’s family moved away from the Highlands when she was 12, but the author is still homesick on occasion.

“There is something about the Highlands which haunts me and I keep returning to it in my writing,” Blanchard notes, adding that the supernatural elements in her book come from her love of Gothic literature and film, while her own personal experiences with nightmares and sleep paralysis also inspired her.

Blanchard says she initially began writing after an author visited her school. She continued because she enjoys creating characters.

“I enjoy the planning stages and can’t start writing until I have researched and decided on names and backgrounds for the major characters,” Blanchard shares. “I get inspiration very easily, through music, travel and interesting historical pieces on the Internet. Another reason I love writing so much is its solitary aspect.”

For the author, a good book consists of a central character with whom she can identify, no matter how different that individual’s circumstances may be from hers. She adds that escapism is important too.

“I like to get completely lost in the book I’m reading. A compelling story helps, as does beautiful language and a sprinkling of magic.”

Writing, for Blanchard, is a mix of inspiration and perspiration. In the planning stages, she finds writing inspiring as she “plants and waters the seeds of her story.” However, she admits that when editing and redrafting deadlines loom, the writing becomes more “perspirational. Sometimes I worked through the night and my hands seized up.”

Nor are those the only challenges for the writer.

“During the writing process, there are difficult days where writing doesn’t come easy and self-doubt comes easy,” Blanchard says. “Once the book is completed, you then have to get it out there and try and encourage people to read it. I went the self-publishing routes, so I had more control, but even traditionally published authors have to do a lot of their own marketing these days.”

Through writing, Blanchard learned that structure and routine are key to having a productive day. She’d rise early, brew an espresso, light a scented candle and play film scores to set the mood. She also discovered that she couldn’t edit as she wrote.

“I have to complete the first draft first; otherwise, I’d languish in chapter one forever more,” she jokes.

Blanchard says she was ecstatic when she completed the book.

“I had envisioned the moment many times, but the relief and pride was immense. I had champagne and my husband took me out for a meal to celebrate.”

For the future, Blanchard says she has a number of ideas for other novels.

“I’m writing my next book and the protagonist is very different from Rowan Munro. She is free-spirited and a little wild. Celtic elements will remain ingrained in my stories as it is a part of who I am and what interests me.”