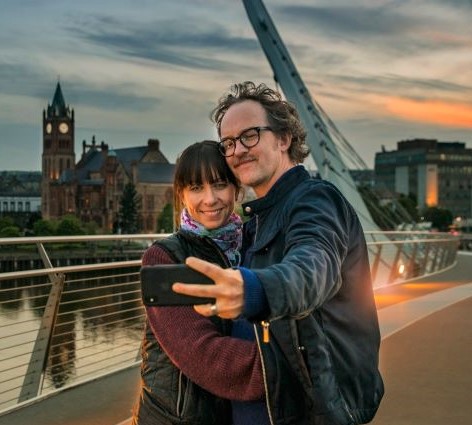 Derry is Ireland’s most-northern city, partitioned by the River Foyle and keeper to a long, divided, and tumultuous history that lives on in its people and places. The city is small, and so it is easy to cover. It is undoubtedly a spot to visit during your stay on the Emerald Isle.

The Craft Village
Wonder no more what to do in Derry. Describing itself as the “hidden jewel in Derry’s crown”, the Craft Village is located in the heart of Derry City Centre. It is the first of our top things to do in the city. It is a reconstruction of an 18th-century street and 19th-century square and is lined with craft shops, balconied apartments, and coffee shops to stop and refuel.

Foyleside Shopping Centre
One of the top things to do in Derry is Foyleside Shopping Centre. It’s home to over fifty stores. Break your day up in the city with a bit of time spent treating yourself or buying a gift for someone back home. Take your pick from big brands such as Pandora, DV8, H&M, Next, and River Island, or dine at McDonald’s, Supermacs, or Costa coffee.

St. Columb’s Cathedral
St. Columb’s was the first cathedral built after the Reformation, constructed in 1633 by William Parrott for The Honourable The Irish Society. It contains artefacts from the Siege of Derry. It is currently the mother church of the Church of Ireland Diocese of Derry and Raphoe.

Museum of Free Derry
One of the things you must do is visit the Museum of Free Derry, built in 2007. It recounts the captivating story and critical events of the years 1968 – 1972. Having opened in 2007, it gives visitors a chance to learn about Derry’s civil rights movement, the Battle of the Bogside, Internment, Bloody Sunday, and Operation Motorman. 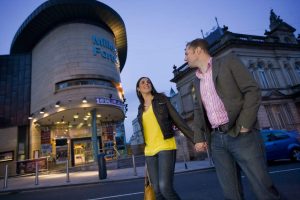 Millennium Forum
Opened in 2001, the Millennium Forum is the first purpose-built theatre. It is one of the largest theatres in Ireland with a capacity of 1,000. Entertainment includes comedies, musicals, pantomimes, operas, ballets, country music events, dance, family events, and concerts.

Tower Museum
The Tower Museum is an award-winning facility that has been open to the public since 1992 and is aptly located within the historic walls. It’s another of the top things to do in Derry. There are two permanent exhibitions, entitled ‘The Story of Derry’ and ‘An Armanda Shipwreck’, the latter being the story of one of the largest ships in the Spanish Armada which sank off the Donegal coast in 1588.

Free Derry Corner
The Free Derry Corner is one of the most popular landmarks in the city. It is based at the foot of the famous Bogside community. It is a freestanding wall that commemorates ‘Free Derry’, the self-proclaimed nationalist independence area during 1968 – 1972 and often celebrates modern-day resistance movements.

The Guildhall
The Guildhall has the twin fact of being home of the Derry and Strabane District Council. It is also one of the most unique and famous buildings within the city. It was built in neo-Gothic style in 1887. It underwent a £9.5 million restoration in project in 2013, making it a must-see attraction in Derry.

Peace Bridge
Wondering what to do in Derry? Visit the Peace Bridge, a 235-metre-long and 4-metre wide bridge. It’s a magnificent structure and bridges the partition moulded by the River Foyle. The two arms of the bridge point in different directions but symbolise the unification of the Protestant Waterside and Catholic Bogside communities.

The Walls
With all the rest covered, we feel that one of the best things to do in Derry is to walk the Walls, built between 1613 and 1618. They make the city the only remaining completely walled city in Ireland. It gives Derry its ‘Walled City’ nickname. Along the way are some of Europe’s most extensive collections of cannons, and you are treated to panoramic views of the city.

The next time you travel to the Emerald Isle, this city is a must for the bucket-list. Take your pick from any of the top things to do in Derry and you’ll make the most of your stay here.