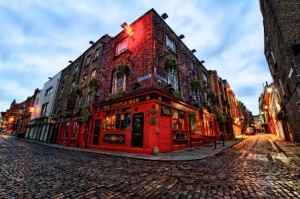 Two Hearts Beat As One

I had not travelled to Ireland in close to a quarter-century.

Inspired by the music of U2 and Leon Uris’ brilliant novel Trinity, I last visited the land of my ancestors – both of my parents have Irish roots – in 1989, making my way from Dublin to Belfast, Derry and Donegal to Galway, and down to Kerry before returning to Dublin.

For a young Montrealer touring on his own for the first time, it was an epic journey of discovery, and the memories of the island’s gentle people and gorgeous landscape lingered long after my leaving.

Dublin, in particular, was an epiphany, as it was again when I returned recently.

Touching down, I felt the same rush of warmth that I had felt all those years ago; a sense of familiarity and belonging, like I was home.

But I am not the same man I was then, and neither is Dublin the same city it was.

“Indeed, a lot has changed since you last were here.”

I am sipping coffee with Naoise Ó Muirí, the 343rd  Lord Mayor of Dublin, at his official residence on Dawson Street in the city’s downtown.

“The Celtic Tiger appeared, roared mightily, and then departed — all in just a few short years,” said the friendly former city counselor.

Ó Muirí is referring to the country’s recent economic rise and fall. Transitioning from a traditional resource-based economy to an IT powerhouse, the country – and its capital city in particular – shot to success.

“There was more money here than we knew what to do with,” he confided. “We saw foreign investment like we had never seen before, pumping wads of cash into the economy. Very suddenly, Dubliners had all this disposable income to be spent in the new shops, pubs and restaurants.”

The city experienced a renaissance, with new buildings sprouting up and older structures getting much-needed facelifts.

“People bought new homes and cars, and for the first time in our history we saw more Irish coming home than leaving.”

The good times came to a crashing halt in 2008, however, with the onset of the global financial crisis.

“It was a reality check,” acknowledged Ó Muirí, whose own IT firm managed to weather the storms. “We don’t have it as bad as some countries, though, and we should be grateful for that.”

While the country’s unemployment rate rose from 6.5 percent  in 2008 to 14.8 percent  in just five years, Ó Muirí believes that things are turning around.

“The Irish are a very resilient people, and now that we’ve tasted prosperity we’ll be hard-pressed to give it up. Take a drive through Dublin; the city is alive, buzzing. People have a spring in their step and hope in their hearts – the signs are everywhere.”

Count the number of cabs zipping around a city at any given hour and it will tell you what you need to know about where you are.

“Don’t kid yourself,” smiled Madu Okoye, who has been driving a taxi in Dublin since arriving from Nigeria with his wife and children in 1997. “There’s still a lot of money here.”

The Okoyes prospered in their new surroundings. When the economy turned, they chose to stay.

“I like the spirit here,” explained the 46-year-old. “Dubliners are tough, and they’re up to the challenges. They have my respect because they’re not afraid to roll up their sleeves when things get difficult.”

Sure enough, the city’s blue-collar Northside is a hive of activity on this day, with pedestrians shuffling to and from work. Things are also humming in the pseudo-suburban southeast neighbourhoods of Ballsbridge and Donnybrook, where stylish boutiques sit comfortably aside older shops. On the city’s southern tip, the Georgian properties by the beaches of Seapoint and Killiney speak to the long-term impact of the country’s short economic boom.

“Like I told you, maybe people aren’t spending like they were ten years ago, but there’s still a lot of money here.”

Later, as we whip past u2’s famous Windmill Lane Recording Studios and up through the refurbished Docklands, a light snow begins to fall.

“Let me tell you a story,” Okoye  said with a laugh.  “My mother visited with us here for the first time last winter. She had never seen snow in her life, and after three days she wanted to go home. Me, I’ve grown to like it.”

I ask  why he has chosen to stay.

“We feel accepted here now, like we are family. Dublin has become an international city, filled with immigrants who came for work. It makes everything so much more colourful.”

Strolling through the famed Temple Bar district, I was taken aback by the variety of visitors. While Dublin is home to thousands of international students from September to April each year, there are those who simply come up for a weekend to partake in the bohemian quarter’s brilliant nightlife.

“It is only a 90-minute flight from Paris,” said 25-year-old Genevieve Delorme in a thick French accent. “My girlfriend and I leave right after work on Friday and go home on Sunday night.”

Located on the south bank of the River Liffey, Temple Bar is a 350-year-old mélange of cobblestone streets and winding back alleys, and is home to the Irish Film Institute, the Gaiety  School of Acting and a host of other cultural establishments.

On this night, Delorme and her travelling companion (Allaire) are drinking and dancing at Alchemy, one of the area’s many chic new clubs whose contemporary décor offsets its ancient exterior.

“It’s gorgeous,” Delorme  shared about the venue. “The whole quarter is beautiful, really, and very romantic. And I love that everything is so close. The restaurants and bars are all squeezed together, and there is good shopping nearby, so we can do a lot in two days.”

“We visit Dublin twice a year,” said the 32-year-old Spaniard from Madrid over late-night fish and chips with her fiancé Mateo at The Porterhouse restaurant on Parliament Street.

“Temple Bar is unique and affordable, and I love the sense of culture here,” she said, adding that the two-hour flight is just long enough to make the trip feel like a real holiday.

“The old pubs are my favourite part of the experience — the beer and the music and everyone singing along. It is like we step back in time.”

Founded in 1592, the renowned institution has always been a hotbed of thought;  Jonathan Swift, Oscar Wilde, Samuel Beckett, Mairead Maguire and Sylvia O’Brien are just a few of the many well-known names that have walked its hallowed halls.

The long-standing dedication to academia continues to this day.

“Trinity College is first and foremost a home to ideas,” noted current Chancellor, and former President of Ireland, Mary Robinson.

“It was, and it remains, a place where students of life meet to discuss both the details and the bigger pictures pertaining to politics, the arts, economics, education, history, and most other subjects.”

That gift of the gab is not confined to the Irish, with over 20 percent of the school’s estimated 20,000 full and part-time students coming from other parts of the globe.

“It’s easy to understand the inspiration,” said Robinson, pointing to the amazing array of antiquated architecture spread out over the site’s four large quadrangles. “It is, in some ways, a sacred space.”

Trinity College is also home to The Book of Kells, a 9th-century illuminated manuscript containing the four Gospels of the New Testament that is on permanent display in the facility’s library.

“It’s stunning,” said second-year law student Michael Moffat, who returns regularly to contemplate the exhibit.  “It’s incredible to be this close to history, and it’s a reminder for me of who we are as a people and where we come from.”

“Like the Irish, Trinity College today is very much the product of its heritage. Moving towards the future, it is vital that we continue to bridge that past with the present day.”

It may be true, as American author Thomas Wolfe once wrote, that ‘you can’t go home again.’ And yet, as I awaited my return flight at the revamped Dublin Airport, it occurred to me that while it might be impossible to rekindle past memories, you can still ‘look homeward angel’ to make new ones.

Somewhere over the Atlantic Ocean, I pondered how I might capture and convey a whirlwind week of activities, impressions, ideas and emotions in a mere 1,500 words. Processing an experience is a lifelong task, or at least a quarter-century. Still, as I dozed-off to the in-flight film, Mary Robinson’s words ran through my mind; moving towards the future, it is vital that we continue to bridge that past with the present day. ~ SPC