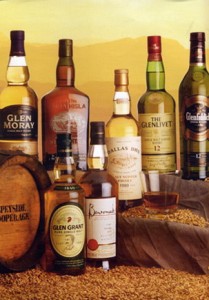 The River Spey is one of Scotland’s most famous rivers, world-renowned for its salmon fishing. But this isn’t the Spey’s only claim to fame; it also lends its name to the largest of all of Scotland’s whisky regions; the Speyside, home to more than 50 distilleries, nearly half of all the active distilleries in Scotland.

No town in the Speyside is more famous than Dufftown, Scotland’s whisky capital. Today, only six distilleries still operate here and they include Glenfiddich and Balvenie. Glenfiddich was founded by William Grant in 1887, and Balvenie just five years later. The two distilleries are still owned by William Grant & Sons and the company also owns a third, little-known distillery, Kinninvie. Dufftown is also home to Mortlach (1824), a highly respected single malt, primarily used as a component of blended whisky and seldom seen as a single malt.

Try Glennfiddich 15 Year; formerly known as the Solera Reserve, it is a complex and balanced offering.

The City of Elginis another important destination for any whisky pilgrim to the Speyside, and a good base from which to explore. To its south, lie Longmorn (1895) and BenRiach (1898) distilleries, the latter was recently taken over by an independent firm that also owns Glendronach.

To the west, is Benromach (1898) and the museum distillery Dallas Dhu (1899). East of the city is the town of Keith, home to one of Scotland’s oldest and most beautiful distilleries, Strathisla (1786). But the City of Elgin has whisky attractions in its own right, including Glen Elgin Distillery (1900) andScotland’s most respected independent bottler, Gordon & MacPhail (1895). In addition to being a prolific bottler of whisky, the company also has a whisky shop that’s one of the Speyside’s best.

Try BenRiach 10 Year Curiositas; BenRiach is one of a few Speyside distilleries to make a peated spirit, and this 10-year is a fine example. Tasted blind you’d think it was fromIslay.

Try Strathisla 12 Year; sadly most of Strathisla’s production is reserve for Chivas Regal, but this meaty Speysider is a classic.

Further south of the City of Elgin are the towns of Rothes and Aberlour. Rothes is home to five distilleries, of which Glenrothes (1878) and Glen Grant (1840) are without doubt the standouts. Glen Grant is notable for its beautiful gardens, while Glenrothes is the main component of the storied Cutty Sark blend. A few miles further south-west, the town of Aberlouris the unofficial home of sherried Speyside whiskies. Of the most prominent three, Aberlour (1826) is the least known, but is interestingly France’s bestselling whisky. No more than five minutes on either side of Aberlour are Macallan (1824) and Glenfarclas (1836), two of the Speyside’s most respected distilleries. Glenfarclas is the second oldest family owned distillery, and also the only one with stocks of whisky maturing from every year spanning five decades. Macallan is the Cadillac of whiskies, both priced and promoted as the King of Malts. Cragganmore (1870) is also of note, a heavy Speysider, and one of Diageo’s six Classic Malts.

Try Aberlour A’Bunadh; varying from one batch to the next, this sherry forward cask strength whisky is always big!

Try Macallan 18 Year; the elegant side of sherry with leather, tobacco and dried fruit.

Although many of the distilleries are clustered in and around a handful of centers, some of them push deep into the hills on the edge of the Cairngorms. Glenivet is the most famous of these, founded by George Smith in 1824. Tomintoul is also well up in the hills near a town of the same name. Founded much later, in 1969, it is one of the highest distilleries inScotland.

Try Tomintoul with a Peaty Tang; another peated Speysider with a chunky earthiness.