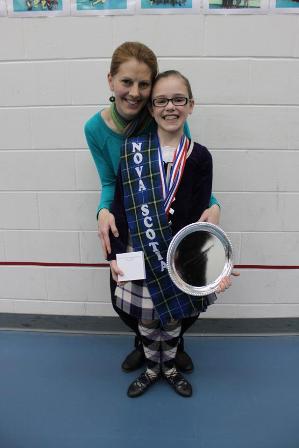 When your mother owns a dance studio and it’s where you spend your time growing up, you’re either going to embrace dancing wholeheartedly or reject it. Drea Shepherd, nine, chose the former. Ask how long she’s been dancing and Shepherd precociously replies, since she was born. She’s not exaggerating. “My mom runs a dance studio and I have been with her at her studio almost every day since I was born,” Shepherd declares. “The studio used to be in our house when I was little.”

Shepherd’s mother worked at the studio every day, starting after school until late into the evening, so it was natural that Shepherd would spend time with her. Many of her friends were also into dancing, which further reinforced that it was a fun thing to do. Of course, it helps when you’re mother’s not just a dancer, but a championship one at that.

Kelly MacArthur won the Nova Scotia and Atlantic Canadian Highland Dance Championship titles repeatedly and has been runner-up in many other competitions across Canada. Outside of that, she’s won a number of awards for her work in the education, arts and culture sectors, including a Nova Scotia Woman in Business award and a Maine Ambassador of Tourism and Culture award. MacArthur was also featured in the Barra MacNeil’s video, My Heart’s in the Highlands. With such a role model, it’s no wonder Shepherd loves dancing so much.

In fact, asked who her biggest influence is, Shepherd doesn’t hesitate when she replies, “My Mom. She has danced everywhere and won lots of cool awards.” Shepherd says her other influence is Marielle Lesperance, a former world-champion dancer that Shepherd has taken part in workshops with.

The native of Sydney, Cape Breton, may be young but she already has experience well beyond her years. She is currently studying at the highest level of Highland dance, premier, and is a veteran when it comes to competition. In May she competed at the Nova Scotia Highland Dance Championships, winning runner-up in the seven-to-nine-year age category. That qualified her to represent Nova Scotia at the Canadian Highland Dance Championships in July, where she will compete against 30 other dancers her age.

Dancing at the championships in July is doubly important for Shepherd since her mother did the same when she was a competitive dancer.

Shepherd has Scottish ancestry on both sides of the family. Her paternal great-grandfather, John William MacArthur, comes from Mabou Coal Mines, while her paternal great-grandmother, Catherine Beaton, came from Blackstone. Her grandfather was born in Inverness, Cape Breton. According to Kelly MacArthur, both the MacArthurs and the Beatons are very well-known for their music and dance abilities. MacArthur says when she began researching the family’s background she discovered six generations of Highland dancers coming straight from Scotland to Cape Breton in the family, “passing down the dance over and over again through the years.”

Shepherd’s not only competed but performed as well, including three times for the Lieutenant General of Canada and in a large concert with Mary Jane Lamond and fiddler, Wendy MacIsaac (see The Fiddler in this issue). As well, Shepherd played at the Stronger Than Steel event, which marked the opening of a new park in Sydney where a steel plant once stood.

Beyond dancing, Shepherd also plays the fiddle, piano and chanter, and sings Gaelic songs. It’s all part of an abiding love and respect for her culture instilled into the dancer at a young age. Nor is she alone in that respect in the family; her younger brother Jera, aged three, already sings Gaelic songs. MacArthur says she’s not certain if her daughter will follow in her footsteps and become a professional dancer. “I think she wants to be a movie director. We will see!”