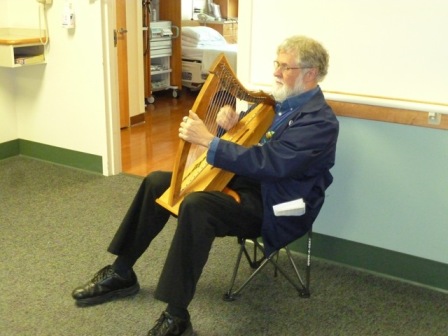 Most people don’t like to be harped at, but when Duncan Saunders comes around everyone gladly makes an exception. Saunders doesn’t lecture folks; rather, he is an accomplished harp player who makes music to help heal and calm patients in a medical center.

The former mental health counselor and therapist is currently one of two Celtic harpists who are Music Ministers of the Spiritual Care Department at the Peace Health St. Joseph Center in Bellingham, Washington.

“I need to note first that I am not a music therapist nor do I practice music therapy with the harp,” notes Saunders. He points out that the harp has a long history of being used to help bring healing and soothing music to individuals with mental, physical and spiritual needs and who may be in distress. He explains that in ancient Ireland, for instance, the god Dagda was known for the ability to change the physical and emotional well-being of his listeners by playing three different strains of harp, which could bring about either sleep, tears or laughter.

“Harp music has been shown to reduce blood pressure, increase oxygenation, provide relief from pain, relieve mental distress and reduce the need for pain medications in some situations,” Saunders says. “Another benefit, especially for hospital staff on acute and busy wards, is that the music brings some needed soothing and calming as they attend to patients. And of course some patients are delighted to have the soft sounds of the harp to counterbalance the noise of the machines and the busy units.”

Saunders believes the harp’s power to heal and bring calm to the listeners comes from the fingers on the strings bringing forth a sound that he says is authentic and resonates at a vibrational level needed to bring comfort.

“There is something iconic or magical-mystical about the shape and sound of the harp, which is found in many tales and legends from around the world,” Saunders avows.

The patients and staff love the music when he and the other harpist show up, Saunders says, adding that one patient told him after Saunders had played for 15 minutes that it was the first time he’d been pain-free in three days.

“The staff of the emergency department has told me that before I enter, there is usually a buzz in the unit that goes away when the harp music is heard. I sometimes see and hear a more relaxed staff when the harp plays,” Saunders declares.

Saunders, 69, took up harp in 1982. He took a beginner’s class in the Celtic harp after a friend of his showed up with a harp and asked if he wanted to try it.

“Unaware that my life was going to be transformed, I said, ‘Sure,’ and when she handed me the harp and it cuddled up to my shoulder I knew I had found my instrument.”

Saunders says as an instrument the harp can be intimidating at first – so many strings! he interjects – but when he realized the instrument is a piano keyboard turned upright by 90 degrees he became more comfortable with it.

“Once your realize it’s like a piano, you can begin to pluck out simple tunes. The real work comes in learning how to let the fingers find the notes without having to look where to place them and to let the heart and soul of the music come through.”

The musician rarely performs in front of an audience, preferring instead to bring the music to individuals in hospital settings.

“I have experience first-hand about how much the music of the harp brings peace to the soul and body in those settings.”