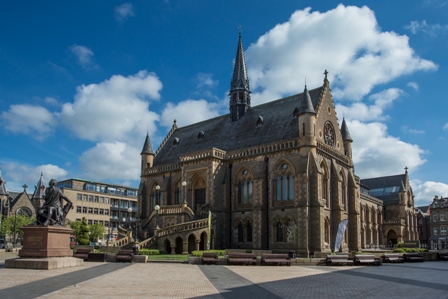 Standing on top of the Law, it is easy to see why Iron Age settlers chose to build a fort on the summit of this extinct volcano. The vista is extensive. From the berry fields of the Carse of Gowrie to the west, the River Tay comes into view, shimmering as it glides under the rail and road bridges connecting Tayside with the ancient Kingdom of Fife, before slipping peacefully past Broughty Ferry Castle and flowing into the North Sea. Behind me, white clouds caress the undulating ridge of the Sidlaws while, below me, as if born from the lava that once flowed from where I stand, lies Scotland’s fourth largest city, Dundee.

The city has transcended its maritime origins and overcome the loss of many of its beautiful heritage buildings in the 1960s. A £1 billion redevelopment of Dundee’s waterfront is underway. This will reconnect the city with its river and the jewel in the crown will be a £45 million Victoria and Albert Museum (V&A), the world’s greatest museum of art and design. This will be the first of its kind to be built in the UK outside London. Designed by the highly acclaimed Japanese architect Kengo Kuma, the building’s site is on the riverfront directly adjacent to RRS Discovery. Opening to the public in 2017, the new museum will be more than just an exhibition centre. In the true spirit of modern Dundee, it will provide a cutting-edge environment for research, discovery and learning.

In recent years this has become a city that has led the world in medical research through its Wellcome Trust Biocentre, and in technology and digital media, resulting in the creation of Grand Theft Auto, one of the world’s largest game franchises, among other things. Today, Dundee leads the world in so many different and diverse spheres and has now been rebranded One City, Many Discoveries.

It wasn’t always this way. This is the city of my birth. Growing up in Dundee in the 60s and 70s I was clothed in its history of jute, fed Mrs Keillor’s jam and enlightened by the journalism of D.C. Thomson & Co. Ltd. Those industries of jute, jam and journalism were responsible for Dundee’s “3Js” nomenclature but of those, only journalism remains today. I developed an interest in architecture, possibly on account of watching so much of the city’s historic core demolished in the name of progress. Within a few short years around the 1960s, the Overgate, Wellgate, Murraygate and Princes Street, defined by fine sandstone buildings and associated customs, culture and memories, were eradicated or altered beyond recognition. Residents were relocated to peripheral estates or rehoused in new multi-storey blocks. This was the age of architectural brutalism. Flyovers connected concrete boxes and people were secondary to cars.

I realize now that those were the years when the city wanted to redefine itself and move on. Dundee has a strong maritime history and it seemed as if new sails were being unfurled but they did not billow in any particular direction. Dundee was in the doldrums.

During the 19th century, Dundee’s whaling industry was world-renowned and the local boat building yards had considerable experience of constructing ships that could operate in harsh, rough seas. When the Royal Geographical Society decided to undertake the first ever scientific study of Antarctica, Dundee was given the task of building the ship that would take Robert Falcon Scott on his pioneering journey to that remote, unexplored corner of the planet. RRS Discovery was launched in 1901. She took her crew through the dangerous southern oceans only to become trapped for two years in Antarctica’s pack ice before delivering them home. Her pioneering mission and the resilience of her construction was testament to the spirit and fortitude of those who built her.

If there was a defining moment when the winds of fortune gave Dundee both direction and impetus, it was April 3, 1986, when Dundee Heritage Trust brought Discovery back to the waters of the Tay. By 1992, Discovery was relocated to a purpose-built dock with an adjacent visitor interpretation centre and, in a stroke of marketing genius, Dundee was rebranded “City of Discovery.” From then on there was an air of confidence about the future of Dundee, both from its own residents and also from incoming investors.

Despite the difficult years of the 60s and 70s, Dundee remains an attractive city. One legacy of the jute years were the many parks gifted to the city. These came from wealthy jute barons trying to outdo each other in the benefactor stakes and perhaps salving their consciences for the working and living conditions they inflicted upon their workforces. The result is a green, attractive city. It also enjoys a prime location between sea and countryside that contributes greatly to Dundee’s burgeoning tourism sector and appeals to students and academics as a place to live and study.

Dundee has a population of 148,000 and two universities with a combined student population of 22,000. Dundee University has more than doubled in size since the mid-1990s and in 2008 completed a £200 million campus redevelopment project. The latter has played a major part in the regeneration of the city. Professor Pete Downes, Principal and Vice-Chancellor of Dundee University, is at the helm of this internationally recognized and acclaimed institution. He says the university boasts world-leading expertise in a number of areas, including life and medical sciences, civil engineering, art and design, history and anatomy, and forensic identification among others. “The breadth of the university enables researchers to work collaboratively and bring new insights to some of the biggest issues facing the world today,” Downes says.

Downes also acknowledges the importance of the University’s Wellcome Trust Biocentre which opened in 1997. “Tens of millions of pounds have been invested to create state-of-the-art facilities for our globally renowned College of Life Sciences at the Wellcome Trust Building, Sir James Black Centre and Centre for Translational and Interdisciplinary Research. This complex houses almost 1,000 scientists from around the world working on new insights, therapies and cures for cancer, diabetes, cardiovascular disease and neglected tropical diseases.”

Dundee’s other university, Abertay, has acquired a reputation as a leader in computer-games technology and digital media and was the world’s first university to offer a degree in computer games. Not many people realize that Lemmings and Grand Theft Auto were created in Dundee. Unsurprisingly, the city is now home to a host of gaming software companies.

Stan Ure is Head of Economic Development at Dundee City Council and is well aware of the importance of Abertay University’s contribution to the city’s development. “Dundee continues to punch well above its weight in computer and digital gaming and now has a legacy of 30 years of games development with many of the pioneers of the industry now leading our key games developers.”

Ure is equally aware of the importance of Dundee’s other businesses and the fact that the city enjoys a broad employment skills base. “There is no single dominant employment sector and Dundee has a significant presence of manufacturing, life sciences, digital media, education and healthcare with major employers such as Michelin Tyre, NCR, Tesco, British Telecom and Tayside Health Board.”

As Dundee’s universities and businesses expanded so did its cultural side. Dundee Repertory Theatre opened its purpose-built award-winning facilities near to Dundee University in 1982, but it was during the 90s it became recognized as a major force in theatre with its own internationally acclaimed permanent company of actors creating new works and performing across the globe from Iran to Mexico and Japan. Sunshine on Leith, featuring the music of The Proclaimers and subsequently made into a film, is just one creation of Dundee Rep Ensemble.

In 1999, the Dundee Contemporary Arts (DCA) arts centre opened. Duncan of Jordanstone College of Art and Design, a school of Dundee University, includes a Visual Research Centre based at DCA. It is home to research staff and doctoral students from design, art and media disciplines.

All that Dundee achieved throughout the 90s would have been the envy of many modern cities, but the story is far from over as evidenced by the new museum and world-class research centre currently under construction. I no longer live in Dundee, but I take great pride in the enormity of its achievements since the days of jute, jam and journalism. These things, which were all products of the city’s spirit of innovation and discovery, made Dundee world famous.