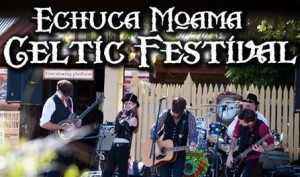 Echuca and Moama are twin towns on the Murray River in Southeast Australia. At one time, Echuca was the busiest port outside of Melbourne. This weekend, the area will be buzzing with activity as Celts of all ages gather for the Echuca Moama Celtic Festival. Committee member Robert Arnold gives us the details!

What are your roles and responsibilities with the event?
I coordinate the bringing together of the event through monitoring the activities of the various committees responsible for various events of the Festival

What is the event’s core mandate?
To provide a community organized Celtic Festival in Echuca Moama providing a Celtic cultural experience of music, dance, and spirituality through the various Celtic nations.

How has it grown over the years?
The Festival commenced with a a small number of bands playing in restaurants, cafes, clubs and hotels with an open air twilight concert Celtic Christian worship, It had two ticketed events: an opening Gathering of the Clans Dinner, and final concert in the local theatre. Now we have bands seeking to be involved, including international bands and entertainers,more venues, instrument exhibitions, Celtic Art, medieval re-enactments and three ticketed events and larger combined events in the gardens on Saturday and on Sunday in the Historic Echuca Wharf Esplanade. Attendance has increased from around 2000 to 4,000 people over the weekend.

Who attends the gathering?
Echuca Moama are twin town on the Murray River which is the boundary for the States of New South Wales and Victoria drawing significant numbers of people with an interest in things Celtic from both States. Some of the bands have large followings from further a field who are attracted to Echuca Moama.

What can they expect to experience this year?
This year we will be having a Celtic Village Fair with all the activities one would expect at a fair, music, dancing, stalls, games, and a miniature Viking village. In terms of music, Wouter Kellerman, flautist, and his band from South Africa will be the feature artist. Each year we have tried to feature a different art form. This year there will be pavement artists doing drawings with a Celtic flavour.

Why is it an important event for the Celtic community there?
We have a mixture of Irish and Scottish people as well a small number of Welsh who find it a great opportunity to come together and experience some of the music and activities from their home countries. It also helps to give the local people something of the culture and heritage of the first migrants to Australia and their influence on Australian folk music.

What are the plans for the event in the years ahead?
The long term aim is to continually bring new experiences to the Festival that will encourage people to make a return visit and to encourage others to visit the twin cities of Echuca Moama.

Given the background to Australia’s foundation of people from the UK and Ireland and to discover the origins of and the movement throughout Europe of the Celtic people there is a vast amount of cultural background to draw upon. As people learn more of the background so we are able to foster an interest in our area.

What can we be doing better?
The biggest issue in any voluntary run organization is to be able to have an effective succession plan so that the event can continually bring in people with like interest to assist in being creative with new ideas to grow the Festival and maintain its Celtic flavour.