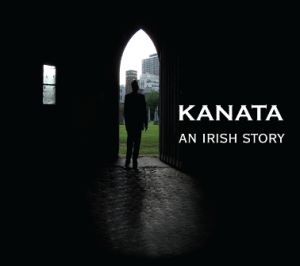 Toronto resident Eleanor McGrath has been an active member of the Canadian Celtic Community for a number of years. In 2009 she authored A Story to Be Told: Personal Reflections on the Irish Immigrant Experience in Canada (Liffey Press / 215pp). Her most recent contribution is the self-produced film Kanata; An Irish Story.

CL: What are your own Celtic roots?
EM: In a true Canadian fashion, the McGrath family roots are not as well traced back to Ireland except for the firmness in pronouncing our last name “McGra(w)” rather than the more mainland pronunciation of McGrath! I say mainland as the beauty of going to our home in Renews, Newfoundland each year is that I never need correct someone on how to say my name and most importantly to spell it! Renews is located on the Irish loop area of the Avalon Peninsula and has very strong Irish Celtic traditions in all aspects of the culture and heritage. However, on my mother’s American side of our family we are in true fashion Irish Americans! I was raised on my mother’s stories of the departures of our Sullivan and Nash families from Kerry during the famine as hedgerow teachers escaping poverty for New York.  It was a school yard disagreement with my best friend in elementary school which my mother explained to me as “they are Boston Irish and we are Chicago Irish!” Oh, how life can be simple in the Irish nation!

CL: Why are those roots important to you?
EM: Having been raised in Toronto during the 70s it was very apparent the emerging focus on one’s heritage as our city each year celebrated the growing diversity during the annual festival called “Caravan”. Everyone was proudly Italian, Polish, Ukrainian, and German in that month of June as you could visit heritage pavilions which captured the imagination and culinary delights of the city. And then there was us, my family — simply Canadian and it just seemed lonely and wrong as a child amongst all these great nations not to know where we had come from…and so I began to explore my roots; interviewing my great aunts and family for stories about the McGraths.  It was apparent that the assimilation of immigrants prior to 1970s was the best and only way to survive in our colonial country of Canada — you certainly did not celebrate being Irish.  It became very important to me to understand who we were; where we came from; what language we had spoken and what foods we had eaten almost driven by envy of my friends from other countries whose parents continued to speak in their native tongue and serve foods that were so unlike anything we had at home — oh to have Mrs. Selzer’s German doughnuts again; or Maria Lopez’s Peruvian Grandmother’s spicy potatoes one more time! Because of this childhood I wanted to be Irish; I wanted to be an Irish Canadian McGrath.

CL: What does it mean to you to be of Celtic heritage?
EM: A Celtic heritage is one to celebrate and honour for many reasons. I need to share that my father’s mother, Granny McGrath was a McLeod descendent of the Isle of Skye and this too is a very rich and troubled history of the Highland Clearings and sadly parallel too many of the Irish Celtic history. Often the only celebration of the Irish in Canada is St. Patrick’s Day and while it was at one time a religious holiday it has a great secular hold on the psyche of our country — everyone wants to be Irish on March 17th!  A Celtic heritage is far more though than the 17th of March and in Canada the impact of the Irish and of course the Scottish on our country is incredible and is not mentioned beyond brief references in history textbooks.  This heritage is a celebration of the ingenuity, the strength and determination of often very poor, uneducated peoples who cleared the land, built the canals, the railroads and sacrificed their lives with minimal recognition. It was only in the past 10 years that a monument was erected in our nation’s capital for the Irish men who died building the Ottawa Canal — if you take the train across our vast nation you are experiencing first hand a monument to the Irish and Scottish workers who worked in the most remote areas against all the harsh realities of nature to secure the links of transportation between each province. And yet where is the information in Canadian history textbooks to discuss the Celtic heritage and the racism that was experienced by Irish immigrants?  If Celtic heritage is regulated to parties on Robbie Burns’ Day and St. Patrick’s Day, then only the liquor stores and bars will be rich and happy. If Celtic heritage is treated with respect by Canadians, by academics and by our government than our history will be rich in knowledge and strong in the understanding that Canada has evolved through hardship and hard work and has much to celebrate.

CL: How are you involved with the Canadian Celtic community?
EM: It has been a privilege to work as the Executive Director of The Ireland Fund of Canada, as a writer in documenting over 128 stories of Irish Canadians and now as a filmmaker in preserving and elevating the knowledge of our Irish culture and its impact on our nation. While these experiences were to promote the Celtic community in a broad sense there is a more personal involvement which comes through my Cork husband, Finbarr and his connection to the Gaelic Athletic Association and the Cork Association in Toronto. I continue to volunteer with several of the Irish cultural organizations in Toronto as this is the best way that I can share in my heritage and encourage by example that our four children will continue to do the same in the future. However, there is nothing to compare to the pride of watching our two younger daughters who both dance with the Gilchrist-Canavan School of Irish Dancing and to meet a very broad network of parents and Irish Canadians committed to preserving Irish dance and culture — these are incredible people!

CL: Why is it important to keep Celtic culture alive in Canada?
EM: There is much beauty in the Celtic culture and for this reason alone it needs to be promoted in Canadian culture. Often we are unaware of the art that documented our nation’s early years was in fact the works of Irish and Scottish painters, the most significant example that I can provide is Paul Kane born in County Cork. Through Kane’s travels across early Canada he shared through his art the beauty of our wilderness, the First Nations peoples and this is our heritage and this is an Irishman.  I want to also draw attention to the Home Children who came to Canada from England, Scotland and Ireland during the 1870s to 1930s period as orphans, abandoned infants to teenagers to work as farm hands, domestics and truly indentured slaves.  By elevating the Celtic Culture we will begin to elevate the memories of those who had no voice in coming to our country and building it through their labour. Today over 12% of Canada’s population are the descendents of these children nothing in my mind speaks more strongly on why we need to talk about Celtic culture.

CL: In you estimation, are we doing enough to keep Celtic culture alive here?
EM: A nation is as strong as its history. We know from the reports on the political and economic world stage that Canada is an incredible country. We have never been a loud player on the world stage but here we are today basking in the strength of our heritage of prudence in banking, resources of the most valued natural minerals, water and intellectual abilities. This nation while apparently young in its birth of 1867 has been explored and developed for over 400 years and all the time it was owned by the First Nations. Our country presently seems to be racing forward but it has neglected far too long the contribution of the Celtic immigrants and equally and more importantly the First Nations and Metis Nation.  Today those with Irish heritage in Canada are the 4th largest population and yet to open up my children’s textbooks there are only two references to the Irish in Canada: 1) Thomas D’arcy McGee and 2) the arrival of the Irish famine victims. There is no mention that many of the Irish were are Lieutenant Governors of the growing provinces, the founders of enterprises that employed people across the nation and even the sectarian organization of the Orange Order was more prevalent in Newfoundland than in Northern Ireland as a brotherhood organization –there was even a Mohawk Orange Order.

CL: What can we be doing better?
EM: The most critical first step in exploring the contribution of the Celtic culture to Canada is to revisit our Canadian history; to acknowledge that presently the history is a viewpoint of the conquering Empire of Great Britain and this prevails in all of the language that is printed. To elevate the academics who are working in the area of Celtic Studies is imperative and not to view this work as insignificant but as imperative to our nation’s history. By rewriting our textbooks to include the Irish and Scottish immigrant history and no longer simply include them as “migration from Great Britain” will then provide a much improved and balanced look at who we were and who we are and of course lead to who we can become. We have much to thank the many immigrants from Ireland and Scotland for and it is about time this is done.  Celtic community organizations equally can do focused work in promoting our heritage and giving voice to the requirement of more textbook history — a groundswell from the 4th largest segment of Canada’s population cannot be ignored. We need to elevate our history beyond January 25th and March 17th; or we ultimately only have ourselves to blame.