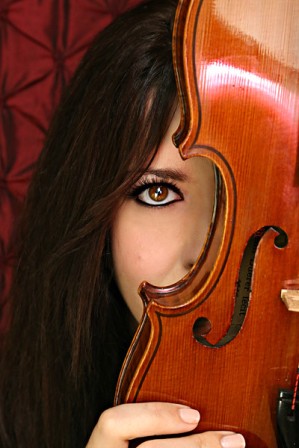 As a child, Erika Nagel pictured herself triumphantly playing the flats and sharps of a gleaming French horn. However, by the age of 10, she had taken up classical violin in her school orchestra

“My grandfather actually made violins,” she recounts via email, adding, “so it just made sense for me to switch over. Logic won, thank goodness – that French Horn was a lot for me to lug around.”

With an Irish, Scottish and French background, it was only a matter of time before she made the transition from Vivaldi to Celtic fiddling.

“Over the years, as I became more interested in my own heritage, I began to incorporate Irish and Scottish fiddle styles into my personal practice time,” she says of the evolution. “Sadly, going from a classical to Celtic is almost looked down upon in some circles. But that only pushed me to pursue it further.

“Celtic music is the expression of our people, and I feel that I do my ancestors honor when I remember their songs and musical styles.”

Raised in Tennessee and now living in Georgia, Nagel loves both making traditional fiddle music accessible to others, and taking new twists on traditional tunes. Although it may look easy to unsuspecting audiences, she says that performing is hard work.

“Aside from mastering technique, there are the real issues of muscle aches and sore fingers, and then the dreaded off days when nothing is coming out right – the rolls aren’t rolling and the trebles aren’t trebling.”

The joy of playing for the people in her life outweighs the trials, however.

“I generally perform at weddings, pubs, churches, and the like. Sure, they are all fun and fulfilling, but at the end of the day there is no greater gig than getting to share this beautiful part of my heritage with my family and friends. I mean, my job is to make music – can it possibly get any better?

And while music is a wonderful way to pass along her passion for the past, Nagel shares that more should be done to preserve, promote and celebrate Celtic culture in the USA and elsewhere.

“We of Celtic stock are some of the most creative, fierce, loving, and historically strong people in the world. Sadly, most of our kids aren’t even aware of their heritage. They aren’t taught that being a part of that particular lineage is just as unique and special for them as it is for every other cultural group.”

She points out that many of those younger people are “not even aware that Irish is actually a language, for example.” Parents, she contends, must be aware of their Celtic legacy, and have a responsibility to instill a sense of pride in their own children if the culture is to flourish.

“Take them to a local Highland Games, grab an Irish language learning program, sign up for an ancestry site. Inviting friends to Celtic music nights at a local pub is a great way to ignite interest.”

A good song, says Nagel, is one that evokes a response – happy, sad or otherwise. When pressed, she admits to an abiding love for a busy reel.

“I think I have stopped seeing Celtic music as just a “feel-good” sound and style, and I have become more in touch with the nuances – a flick of the wrist, and the roll of a finger may not seem significant to someone just starting out, but those subtleties are so important.”

In the beginning, though, simple words of support can inspire a struggling fiddler to become an aspiring musician.

“If I ever see a young person in an audience who seems even remotely interested, I make it a point to approach them to chat. Sometimes that is all it takes – the right person to be encouraging, to take the unreachable mystery out of music for kids.”