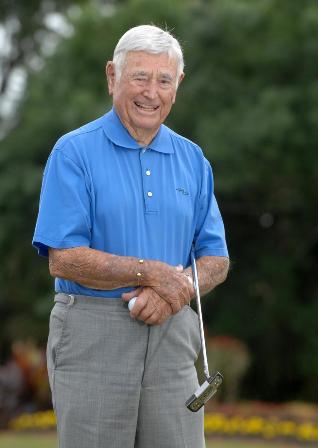 Errie Ball hit the ball long in more ways than one. The Welsh professional golfer, who died in July at the age of 103, was the PGA’s longest-serving pro. He was the last survivor out of the 72 players who participated in the first Masters golf tournament in Augusta, Georgia, in 1934. According to his obituary in the New York Times, Ball finished in a tie for 38th place. “I thought it [the Masters] was the greatest, the best place that I could be in golf,” Ball told PGA.com.

The New York Times reported that while Ball lucked out at the Masters, he proved himself in other matches. According to the paper, he won the Southeastern PGA title several times in the 1930s, the Atlanta Open in 1932, the Virginia Open in 1936 and the Illinois Open in 1953. He also qualified for 20 United States Open championships and 12 PGA championships, according to The Times. But he only competed in one other Masters in 1957, a 23-year gap between appearances that remains a record, The Scotsman noted.

The 1957 Masters marked the first time in which a 36-hole cut was put in place, The Scotsman reported. Ball failed to make it, but wasn’t alone: Ben Hogan and first-time Masters winner Horton Smith also dropped out.

But little doubt existed that Ball could drive the ball. The Scotsman said he was nicknamed “the little man with the big stick” and at 100 years of age he could still whack the ball more than 200 yards down the middle of the fairway. The newspaper also reported that Ball attributed his many years to the pleasure of a Scotch whisky every afternoon.

Ball was born in Bangor, Wales, to what PGA.com called “one of Great Britain’s famed golf families.” His father spent 50 years as a golf professional at Lancaster Golf Club, while his great uncle, John Ball, was the first amateur to win the Open Championship in 1890 as well as eight British Amateur Championships.

Ball’s pro debut came at age 17, seven years after he first began playing golf. It is as an instructor, however, that Ball may have made his mark. Beginning in the late 1930s, Ball would serve as a PGA professional at numerous courses across the United States. The Times said he spent almost 25 years at Oak Park Country Club outside Chicago and 20 winter seasons at Tucson County Club in Arizona.

Apparently he had a sense of humour; Golf Week said he registered for a lesson at a local driving range in Chicago and acted as if he couldn’t shoot. But at the end of the lesson he was driving the ball down the length of the fairways, amazing the golf pro who’d been assisting him. The Scotsman reported, “…his influence as a teacher, and in particular as a teacher of professionals, was immense.” In recognition of his long teaching career, spanning 83 years, he was inducted into the PGA Golf Professional Hall of Fame.

The Scotsman reported that in Stuart, Florida, the town in which he retired, a statue of Ball was put up on the first tee. Golfers rubbed the statue’s head prior to teeing off to ensure a good game score. “Errie’s amazing career spans the legends of the game – from Harry Vardon through to Tiger Woods,” PGA of America President Ted Bishop told PGA.com. “His longevity, according to those who knew him best, was founded upon a love of people. Each day, like each step he took on the course, was spent with purpose. We will miss him dearly, but his legacy continues to shine through the many PGA professionals he inspired to grow our game.”