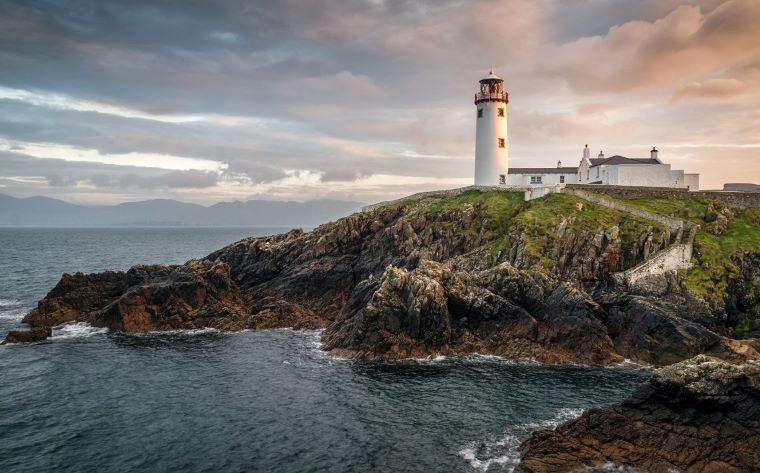 Starting in the very north of Ireland in Donegal, and finishing in Cork in the south, the Wild Atlantic Way takes in 8 counties and has over 150 discovery points along the way, helping you to relax and enjoy the wonderful views as you hit the road. For those of you who are planning the 2,400km journey, here are 10 destinations to be sure you visit.

Farrens Bar, Malin Head
Regardless of whether you start or finish your trip in Donegal, one place you need to visit is Farrens Bar, where you can enjoy a relaxing drink and a warm welcome in Ireland’s most northern pub. Get a feel for the area by listening to and enjoying stories from the locals.

Portsalon Beach
The county of Donegal is home to some of the finest beaches in Ireland; some would even argue Europe, and it’s easy to see why. Top of the list if the quite stunning Portsalon Beach which was recently voted the 2nd most beautiful beach in the world. With great views of the Inishowen Peninsula (which is another must see area), and spectacular sunsets, be sure to visit Portsalon Beach on your trip.

Mullaghmore Head, Sligo
Next up is Mullaghmore Head in Sligo and here you can enjoy the great coastal cliffs and the crashing waves that accompany them. You may even be lucky to witness the ‘Prowlers’ which are waves that rise as high as 100ft; waves unlike any other in Ireland.

Achill Island
The coast of Ireland is home to many small islands, many of which are deserted, but the largest of the islands is the amazing Achill island, off the coast of Mayo. Home to 5 blue flag beaches, many great walking tours and some great country pubs, Achill island is certainly worth venturing out to. Access to Achill Island is via a road bridge and you will have lots to see and do on the island. 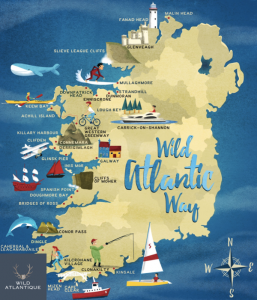 Clifden
Clifden is a coastal town located in Galway’s picturesque Connemara area. Nestled between the 12 Ben Mountains, the Atlantic Ocean and bog land area, Clifden is one of Ireland’s most popular towns and has many shops, bars, cafes, restaurants, hotels and B&B’s making it a great stop off point as you hit the halfway point for your trip. For those of you who like a little bit of history, Clifden is home to the scattered remnants of the world’s first trans-Atlantic radio station, as well as a wing-shaped memorial to commemorate the first non-stop flight across the Atlantic, which crashed in Clifden. Alcock and Brown who were the pilots, thankfully weren’t injured in the crash.

Cliffs of Moher
One of Ireland’s most popular and picturesque tourist destinations, no journey along the Wild Atlantic Way would be the same without a visit to the Cliffs of Moher. The cliffs are Ireland’s most visited natural attraction and on a good day you see Aran Islands, Galway Bay and the Dingle Peninsula and Blasket Islands in Kerry. If you can only visit the Cliffs of Moher for a few hours, try do so as the sun is setting, as this is one of the most spectacular views you will see anywhere in Ireland.

Skelig Michael
Located 8 miles from Kerry’s Iveragh Peninsula is Skellig Michael which is a 1300 year old monastery carved into the cliff and is now a UNESCO World Heritage Site. The island can only be reached by boat on a good day, but is well worth getting along to and will certainly provide you with views and memories that will last a lifetime. As George Bernard Shaw described it “part of our dream world.”

Dursey Island
A trip to Dursey Island off the west coast of Cork is a must for the adventurous above you as it is only accessible on Ireland’s only cable car. Take a 10 minute ride out to the island and enjoy the waves and water crashing below you as you go. A scary thought for many but when you get there, the ride will have been worth it. Dursey Island is said to be home to some of the best sunsets in Ireland, which are known locally as ‘Europe’s last’.

Mizen Head
Having started in Malin Head, it’s only right to stop off at Mizen Head, which is the most southern part of Ireland. For the fearless among you, climb down the steps at the edge of the peninsula and journey along the arched suspension bridge to hit the point at which you can go no further. Look out at the sea and enjoy the wonderful view and noise that is created by the waves crashing off the cliffs.

Kinsale
Last on the list is the small fishing village of Kinsale, which has been hailed as the gourmet capital of Ireland. With stunning views as plenty of bars, cafes and restaurants to suit all budgets, this is the perfect place to finish (or kick off) your Wild Atlantic Way.