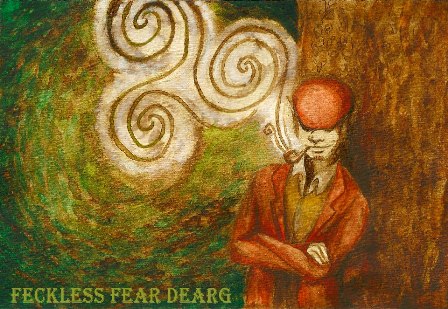 Whether they are performing or not, the members of Bowling Green, Kentucky-based quintet Feckless Fear Dearg can always be found in the friendly confines of a local pub. Recently Celtic Life International sat down for a drink with the band’s front-man Zachariah Daugherty.

What is your own ethnic heritage?
We are a mix of Americans with Celtic Ancestry. We have Scottish (Spence), Welsh (Lewis), and Irish (Daugherty), and then there is LaRouche, we won’t talk about where he is from, but we like him well enough anyways.

When and why did you start playing music together?
When an American Pub celebrates St. Patrick’s Day something interesting happens. The crowd filters itself into two subgroups, those who are there to celebrate their heritage and those who are there to drink green beer. In 2011, I ended up in a subgroup of kindred spirits, who also had musical backgrounds. As fate would have it, we all play complimentary instruments, and thus Feckless Fear Dearg was born.

Are they the same reasons you do it today?
We started because of the love of the stories of our grandfathers; the draw that the music has on us, and the importance of passing on our heritage to a new generation. Over the last two years, we have heard the stories and appreciation of audience members who were transported to memories of people and places since past. It brings a sort of pride and joy to all of us. As well as the ability to cut loose from the stresses of life and to revel in the moment and who we are and what we believe.  It is empowering and inspiring. So I am fairly certain we will go on doing this until the end of our days.

How has the group evolved since that time?
FFD started out playing trad songs and a few contemporary covers. There was a bit of a learning curve due to our diverse musical backgrounds. We had to find a style that was both Celtic in sound but unmistakably Feckless. However, it was when we began writing original songs that things began to evolve exponentially. Today, Feckless Fear Dearg is a band with power and intensity that is unforgettable.

How would you describe your sound today?
We do a trad style, but, with the intensity of a rock band. Heavily inspired by the likes of the Pogues and the Dubliners, we often face audiences that are just fired up by the music and it’s awesomely overwhelming.

What makes a good song?
A good song is more than just the right Rhythm and Melody performed in a favorable manner. It is heart and soul and when you’re listening live you can just feel the spirit of each song like a fog that settles over the audience. Whether it’s about, love, family, friends, work, life, drinking, partying or whatever, the singer has to believe their song and feel it. This is where FFD shines most brilliantly, as we pour our heart out the audience will feel it and be transported.

Where do you typically perform?
Feckless can always be found at a Pub. We may or may not be performing that night but we are happy to sing a request anytime, if there is a pint to be had. You can also find us at Fairs and Festivals across America. We have a particular love for Highland Games, and all of their crazy fun.

What is the response like from audiences?
We have had such an overwhelming response from audience members. The ability to open up the hearts and minds of complete strangers is life changing.  From listening to their tales, to toasts, and shared drinks, fan mail, and homages of gratitude we find ourselves challenged evermore by each performance.

What does the band have on tap for the rest of 2014?
Currently we have plenty of shows on the calendar. We also will be in the recording studio with such originals as: Jimmy Where’s My Beer?, Freedom’s Shore, Fair winds & Following Sees, and Wrap it in Bacon. I don’t want to give away all of the song titles, but they will be all originals. You can expect to see us more on Youtube, on Radio Stations, and a generally overall more active presence in the Irish and Scottish communities.  For an idea of what we are doing or where we are at be sure to look us up on Facebook.

Are we doing enough to preserve and promote Celtic culture generally?
In my opinion, the efforts of the many families, groups, and societies make a heartfelt and effective impact on the world around us. We continuously try to find new ways to strengthen our own connections and to inspire others to do so as well. But, you get mixed results. To some Celtic equates to knotwork, fairies, leprechauns, and beer, and perhaps that is where their interest ended.  But the Celtic Nations have such rich histories and heroes, and tales, and trials and tribulations, wars lost and won, it is rife with mystique and legend. Celtic culture could never be preserved enough because it is too precious to lose. As a generality we need to always do more, and to encourage, empower, and inspire others to do so as well.

What can we be doing better?
There is so much we can always be doing better. Enrich your daily lives, find an old recipe, read a favorite tale to your children, go to a historical reenactment, visit the older parts of the world, whatever is your calling. From daily life, to art, and education, whatever your interests might be, there is a Celtic side to it, and if you can make the time to share the majestic culture that is our heritage the reward is ever bountiful.