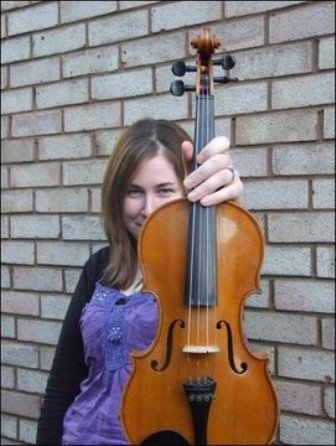 Founded in 1996, Fiddle 2013 continues to promote and sustain traditional fiddle music so that it can hold its place in the culture of Scotland and the world. The event’s artistic director Eilidh Steel gives us the details on this weekend’s festivities.

What are your own roots?
I’m from Helensburgh, Argyllshire on the West Coast of Scotland although I have been living in Edinburgh for a few years now.

When and why did you get involved with this event?
I first got involved as a work placement while studying music. It was my first time at the festival and I loved it. I got asked to join the committee and I travelled over to Edinburgh for the next few years to help as a volunteer. I got heavily involved in programming, stage management, working with the media, and occasionally performing and teaching too. I became the Artistic Director of the festival and the past couple of years have also coordinated the outreach projects too.

What are the challenges of being involved?
I think like all voluntary run organizations, finding people that have time to put in is always going to be difficult – it is a lot of work to organize a festival. For me juggling festival organizing with my own musical career can be a challenge, especially when on tour. We are all passionate about it though and it all comes together.

What are the rewards?
Hearing great music! We organize the festival all year round and it can be tough at points, but seeing it happen is a huge joy. One of my favourite things is when you see young kids or adults who haven’t played for very long sitting next to respected professional musicians and they are all having a few tunes, enjoying themselves. It’s a great feeling to think that we have brought these people together. The Scots Fiddle Festival was awarded ‘Event of the Year’ in the MG Alba Scots Trad Music Awards in December 2012 and was shown on TV a few weeks later. This is a very high profile award and we were over the moon to receive it.

Why is it an important event for the community there?
The local community (Newington area in Edinburgh) is very supportive, we have a good relationship with local businesses who give audience members and performers discounts for food over the weekend. Some others donate prizes for our raffle and others just help by displaying our poster in their window and we even had a fiddle festival window display in one clothes shop, with lots of fiddles hanging down. The festival is like a community in itself, although there are always a lot of new audience members, there is a lovely community feel that you get with a small music scene, with people who have become friends meeting up each year from all over the globe. It’s the biggest fiddle event in Scotland and is seen as one of Scotland’s biggest weekend music festivals. The festival’s aim is to sustain and promote Scottish fiddle music as well as feature some related traditions. It is a place where people can maybe hear fiddle music for the first time, meet, perform, teach, learn, be inspired..

What can attendees expect this year?
Festival-goers can expect to hear a weekend full of Scotland’s rich fiddling heritage with artists like Rua Macmillan’s Big Band, Rura, Gordon Gunn, Adam Sutherland and Lori Watson who are rooted in various distinctive Scottish styles, furious Finish fiddle band Frigg and Troy MacGillivray travelling from our celtic cousins in Nova Scotia. This is the first year of our outreach project, made up of a group of young talented teenagers who will be working with some of the booked acts towards performing the opening of the Saturday night concert. From the moment the doors open to the final ‘Stramash’, you can see people of all ages, nationalities, non-players, beginners and professionals alike, all smiling and enjoying their common love of fiddle music – it’s a wonderful atmosphere. This is what hooked me into being involved with organizing the festival twelve years ago and still is my favourite aspect of the weekend”

What does the future look like for the event?
This is our 18th festival and there’s no stopping us going forward!