Fiddler on the Loose 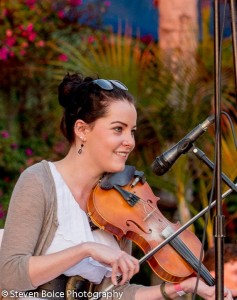 The Irish Diaspora reaches all corners of the world. For political, religious and economic reasons, many left Eire and now Irish names, genetics and culture have spread globally. Our roving reporter Maria Watson explains.

Canadian fiddler Chrissy Crowley is part of this Diaspora. Chrissy’s music is strong in her native Cape Breton tradition as scion of the famous Scottish Chisholm fiddling dynasty on her mother’s side. Her Irish surname, however, is proof of her mixed heritage.

She has always been curious about the music of her father’s ancestral people. Irish-American musicians Liz Knowles and Kieran O’Hare were summer residents of Margaree, Cape Breton where Crowley lived as a child. They encouraged the eager young fiddler and taught her tunes of the Irish repertoire, jigs and reels which later appeared on Chrissy’s debut recording as a teenager.

Her first performance outside Canada was in 2006 at the Cape Cod Celtic Festival in Massachusetts, where one in four residents is of Irish descent. “The first fiddlers I ran into in Cape Cod were Brenda Stubbert and Jerry Holland,” she recalls, “two phenomenal fiddlers from home known for playing both the Scottish and Irish styles. Jerry and Brenda have Irish and Scottish backgrounds like myself, and they inspired me to continue learning both genres and acknowledging both sides of my musical roots”.

At the 2012 North Atlantic Fiddle convention in Derry, Northern Ireland, Crowley performed with other fiddlers from the New World who had returned to their ancestral homeland. ”NAFCO was an incredible experience for me. I was completely immersed in different backgrounds of fiddle playing and I was part of the “More Strings Attached” program which had young fiddlers of the various Celtic nations come together and write for the week. I had to learn the style of each nation and write Cape Breton pieces around it. It really helped me grow as a musician and I was able to study the Irish musicians a little more closely.”

Her paternal ancestors left Ireland and settled in the island of Newfoundland.

Subsequently, her father’s family moved to the island of Cape Breton, where Chrissy was born. Thus one could say island hopping is in her blood.

In 2008, she and other Cape Breton musicians went to the Dominican Republic for the “Caribbean Ceilidh” in Sosua. Crowley has travelled to Cuba several times, invited by Cuban musicians who play the music of Galicia, Asturias and Ireland, the three Celtic nations with historical connections to Cuba. Her first performance in Cuba was at the beautiful Hotel O’Farrill in Havana. “The elegant hotel was once the private residence of the O’Farrill family,” she notes. “It shows how very wealthy some of the Irish became in the New World.”

The music of Cuba is much like its people, a mixture of many cultures. Traditional tunes are infused with tropical rhythm and the mix of Caribbean percussion with Celtic music made it on Crowley’s second album, The Departure, where she playfully included the steel drums of the renowned Pepito Pinto. She recorded with Pinto not in his homeland of Jamaica, but in Cape Breton. “Pepito has quite an amazing story – I like to call it hopelessly romantic – where he fell in love with a woman from the East Coast and moved to Canada to be with her. He is one of the most famous musicians of Jamaica. He started learning and performing Celtic music with Jason Roach while in Cheticamp, an Acadian village near the tip of Cape Breton that also has many families of Irish descent. My grandmother was a French speaker from Cheticamp with the last name Delaney. I started writing a tune called the Doppelganger which had a Latin and Caribbean feel to it and Pepito was the perfect musician to have on the track.”

Two other Caribbean islands on Crowley’s to-do list are the Barbados and Montserrat. “Other Cape Breton musicians have performed the Barbados festival and have given it rave reviews. The festival features all styles of Celtic music and the tropical climate makes it feel like a vacation while performing” Both Montserrat and Barbados have a link to Ireland as many Irish slaves worked the sugar plantations of both islands. “I find it fascinating that the little island of Montserrat was once was home to one of the most famous recording studios in the world, AIR. Famous musicians found the exotic location musically inspiring and I know the feeling, having written so much in Cuba.”

The most recent destination for the intrepid musician was Mexico, where The First International Puerto Vallarta Celtic Festival was hosted by the San Patricio Pipe band. The band is named after the famous battalion of the Mexican army comprised of mostly Irish soldiers. Irish soldiers fought with valour in Spanish and Latin American armies. “I’ve played at sessions at O’Reilly’s Bar on O’Reilly Street in Havana, named after the military leader Alejandro O’Reilly. Many Latinos have Irish heritage as descendants of the Irish soldiers.” Crowley hosted the open session at the festival.

“The session was for musicians of all levels and backgrounds, everybody has something to provide. We played tunes of all the different Celtic nations. The focus was on friendship and fun and sharing the wealth of music of the Celtic Diaspora.”