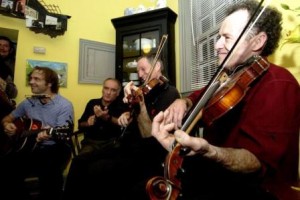 Prince Edward Island has been home to a strong fiddling tradition for over two hundred years. First established by Scottish immigrants, it was also shaped by Irish immigrants arriving a generation or so later and seasoned by the unique rhythmic sensibilities of the Island’s original European inhabitants: the Acadian French.

Although most other Celtic and North American fiddling traditions have been well represented by widely available commercial or field recordings, this has not been the case for Island fiddling. There was no active professional fiddling scene on PEI until quite recently, and no local promoters or enthusiasts emerged to establish a local recording or broadcast industry devoted to home grown fiddling. And since the 1930s, Island fiddling has stood in the shadow of two major broadcasting powerhouses: Cape Breton fiddling on the one hand, and Maritime fiddling – founded by Canadian media legend Don Messer – on the other. Consequently, the outside world has been largely unaware of PEI as a major fiddling center.

For generations, Island fiddling flourished on the local level. Nearly every “district” had its stock of fiddlers, who played their lively, highly expressive music year round at house dances, weddings, “frolics” (work parties), church picnics, community socials, and schoolhouse dances. “Them times,” fiddling was an absolutely essential aspect of Prince Edward Island community life, and it was virtually unthinkable to hold any important community event without having a fiddler on hand to provide music for dancing.

Most of the fiddlers whose music is represented on this site developed their playing styles and attitudes about music during this heyday of community fiddling and carried them virtually intact into the modern era. And because musical individualism was an important local attitude, virtually every old-time Island fiddler developed a highly distinctive personal style and a unique approach to the tunes in their repertoire.

The mid-1950s through the early 1970s saw great changes come to PEI, and as one consequence Islanders transitioned from community music and dance to entertainment provided by mass media. As the importance and visibility of fiddling declined, the art no longer drew youngsters to its fold.

In 1975, some Islanders became alarmed by this state of affairs and began taking concrete steps to preserve Island fiddling. They founded the Prince Edward Island Fiddlers’ Society, which set up annual fiddle festivals and developed instructional programs to pass the art on to youngsters. After nearly twenty years of effort, these and other efforts aimed at the revival of fiddling bore fruit and a new generation of players came into its own. Nowadays, visitors to the Island at most times of year can find performances by local fiddlers not only at festivals, but at concerts, town fairs, theatre productions, and at the nearly ubiquitous local talent shows known as “ceilidhs” (KAY-lees).

Although fiddling as an activity was saved by the revival movement, and some extraordinarily talented new players have appeared on the scene, for the most part the styles of the older generation of players have not been passed on.