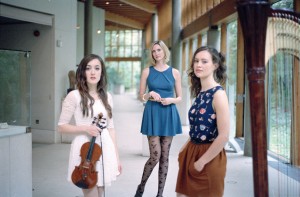 When Scottish Gaelic singer Joy Dunlop looked out into the audience and saw esteemed poets Sheila McLeod and Christine De Luca sitting in the front row, her heart skipped.

Dunlop, along with fiddle and harp duo Twelfth Day, had just finished putting poems by some of Scotland’s leading female writers – including McLeod and De Luca – to music. Now, after eight months’ work, it was time to launch the CD and enjoy the applause. Still, it was nerve-wracking to see McLeod and De Luca sitting in the audience at the Scottish Poetry Library in Edinburgh.

As Dunlop stood on stage with Twelfth Day members Catriona Price and Esther Swift she realized the moment of truth had arrived. “There was a horrible few seconds when I thought, I really hope they like this,” recalls Dunlop with a giggle.

“I was relieved that at least I was singing the English translation of De Luca’s poem. She wrote the original in Shetlandic (a dialect that blends Old Scots with Norse.) Shetlandic is a really strong dialect and I would have sounded fake singing that.”

The musicians needn’t have worried: McLeod and De Luca loved hearing their work performed, and the show turned out to be a moving celebration of an unusual collaboration.

Entitled Fiere (a Scots word for companion or friend), the CD has been warmly welcomed by the poets featured.

Summing up her feelings, Meg Bateman refers to English essayist Walter Pater, who in 1873, wrote that all art aspires to the condition of music.

“A musical delivery is able to make more of the mood and dynamics than the spoken word ever could,” Bateman says.

Dunlop says that poems are perfect songs in the making due to the flow or rhythm of the language.

She said that in making Fiere, the musicians chose poems that touched them in some way. In many cases, it felt as though the tune was already in the poems.

“As soon as we read each one, they just cried out to be sung. There was something unique in each poem that caught our attention, but they all had one thing in common: an ability to touch the reader and therefore, the listener.”

The poems are sung in Gaelic, Scots and English. The blend of languages wasn’t deliberate, but the trio enjoyed working in the three languages. The musicians are well-known in their fields, but this was the first time they had composed their own melodies and the experience was a thrill.

Fiddler Catriona said she and harpist colleague Esther enjoyed the experience of fusing their musical style with Joy’s, and exploring the poetry to make something new.

Working with nationally recognized poets was naturally a buzz.

“We knew which poets were on our wish list but that’s exactly what it was – a wish list,” Dunlop says. “When we first contacted them we fully expected a lot of hard work and even some knock backs.”

But the poets’ response was positive from the start.

“Every single writer we approached gave us their permission. To be able to bring together a body of work that celebrates the experiences of Scottish women in a completely new and unique way has been a privilege.” ~ By Carol Moreira