FIGHT OF HIS LIFE 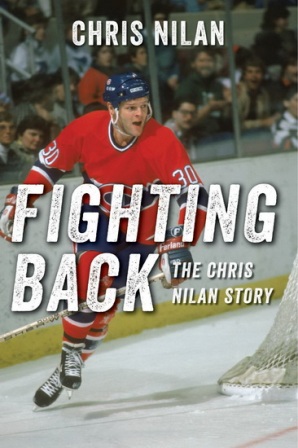 The National Hockey League has had its fair share of gutsy Irishmen through the years, including Red Kelly, Joe Malone, King Clancy and Terry O’Reilly. No one was perhaps grittier than Chris “Knuckles” Nilan, however, who recorded more than 3,000 penalty minutes over 15 seasons with the Montreal Canadiens, New York Rangers and Boston Bruins.

Nilan’s 688-game career as an on-ice enforcer found its roots in his younger years.

“I grew up a Bruins fan in West Roxbury, which is a very Irish section of Boston,” he tells Celtic Life International over the phone. “That part of town was pretty tough back in the day, and I learned how to use my fists as a kid to get by. Growing up there definitely had an influence on the way I played hockey.”

Like many Bostonians, the 56 year-old is fiercely proud of his Celtic heritage.

“My brother and I researched our ancestry and we can trace our father’s family history back several generations to Cork, Kilkenny and the West Coast.

“I’m typically Irish,” he continues, “loud, opinionated and emotional. And I’ve always had a real blue-collar work ethic, like a lot of those who settled North America. Cities like Boston and New York were built on the backs of hardnosed Irish immigrants. I know that sounds like stereotyping, but it pretty much describes me to a tee.”

“It’s a bum rap, really. Every culture drinks, it’s not just an Irish thing. Look at places like Italy or Spain where wine is served with every meal. How we got pinned with that one is beyond me.”

Ironically, the ex-pugilist endured his own battle with the bottle.

“I’d always enjoyed a few beers,” he shares. “Drinking was a part of my life as a young man, and certainly later on during my career. At some point, I crossed a line that took me to some pretty dark places.”

That nightmarish journey – from alcohol to painkillers to heroin – is one that he recounts vividly in his recently released autobiography, Fighting Back; the Chris Nilan Story.

“I wrote the book for a number of reasons,” he explains. “I think it was important for me to look back at what I went through as part of my healing process. And I also hope that by sharing my story – my experience, strength and hope – that someone who is struggling with dependency issues might be able to find some inspiration in it.”

Now in his fourth year of continuous sobriety, Nilan has never been busier.

“Along with all the book signings, I host an afternoon radio show on TSN 690 in Montreal. I speak to different groups – mostly young people at schools – as part of my No More Bullies Tour initiative. I’ve been travelling a lot – I just got back from Afghanistan which was my fourth time over there. And I still play in some old-timers hockey games. So I’ve got all I can handle for the time being, and I’m just trying to take things one day at a time; keeping busy keeps me out of trouble.”