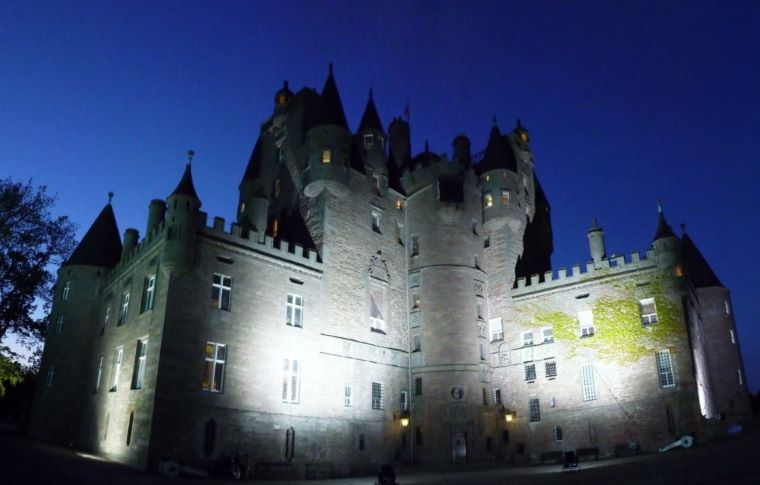 Scotland has often been declared as one of the most haunted countries on earth and as host to around 2000 castles with histories which stretch back more than 900 years, it’s little wonder that these eerie abodes have come to be associated with supernatural happenings and ghostly apparitions.

1. Meggernie Castle
Perthshire’s Meggernie Castle is inhabited by a rather flirtatious ghost. Believed to have been the wife of a Menzies Clan chief, the resident white lady is not only happy to show herself to staff and visitors, but has also been known to kiss sleeping men. It is therefore hardly a surprise that her amorous ways are said to have been the cause for her demise when her jealous husband murdered her in an uncontrollable rage before cutting her body in half in order to dispose of it. The bottom half of her ghostly presence patrols the lower floors and grounds of the castle, while her top half lingers upstairs – her preferred spot for teasing Meggernie’s male guests.

2. Ethie Castle
Ethie Castle near Arbroath was the original seat of the Forsyth Clan and later occupied by Cardinal Beaton, the fifteenth century Abbot of Arbroath. A powerful figure of the Catholic Church and a savage persecutor of those of Protestant Faith, the Cardinal had many enemies and suffered a violent end in 1546 at the hands of Protestant nobles. His ghost is known to parade slowly around Ethie, hindered by his gouty leg which is recognised by its unmistakable thumps as he drags it along behind him. But the Cardinal is not the sole phantom presence at Ethie, guests have also reported hearing the cries of a young child at night, often accompanied by the sounds of a wheeled toy being pulled across the floor.

3. Sanquhar Castle
Sanquhar Castle in Dumfries is also home to more than one entity. The first is the ghost of the unfortunate John Wilson, the innocent party in a sixteenth century dispute between his master, Douglas of Drumlanrig,and the Lord of Sanquhar. In an act of spite against Douglas of Drumlanrig, the Lord of Sanquhar incarcerated Wilson and falsely accused him of heinous crimes before having him hanged. John’s ghost can still be heard today, rattling his chains and groaning in protest of the barbarism and cruelty he suffered in life. The second ghost is a beautiful white lady of unknown identity, although many have speculated that she may be the spirit of Marion of Dalpeddar who is also thought to have befallen a tragic fate at the hands of the Lord of Sanquhar.

4. Duntrune Castle
Argyll’s Duntrune Castle is reportedly sound-tracked by the eerie playing of a spirit bagpiper who was brutally murdered by the Campbell Clan. The piper had been sent to the castle by his master, an Irishman named Coll Ciotach, who intended to wage war on the Campbells and wanted to gain some inside knowledge of their defences. However the clan soon became suspicious and locked the piper in a tower room while they lay in wait for the arrival of Ciotach. In a bid to warn his master, the piper lifted his bagpipes and began to play an alarm while at the same time submitting himself to the cruelty of the Campbells as they dragged him from the tower room and cut off his fingers before leaving him to slowly bleed to death.

5. Barcaldine Castle
The unearthly presence of the Campbell Clan has also stirred Barcaldine Castle near Argyll where a pair of Campbell brothers haunt the hallways. Donald Campbell, Laird of Barcaldine, was murdered by Stewart of Appin at the castle during their bitter feud in the eighteenth century. Stewart then sought refuge in Inverawe at the home of Donald’s brother Duncan Campbell, who had not yet learned of his siblings killing. By the time Duncan received news of his brother’s death, the cunning Stewart had fled. Tortured by his failure to avenge his brother’s murderer, only in death could Duncan beg Donald’s forgiveness and reunite with his spirit at Barcaldine.