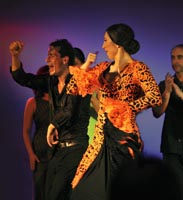 The 7th Annual Fall for Flamenco Festival is underway this week in Halifax, Nova Scotia, featuring some of the hottest local and emerging flamenco dancers, singers and guitarists this side of Spain.

What inspired you to start this festival?
When I first came to Canada, I discovered such a great city, with so much potential, yet so little flamenco! As a dancer, flamenco to me is a singular moment captured from a universal life experience. I felt this art worth expressing in Halifax to expose a new cultural dialogue for local residents to enrich our Atlantic community. I knew, almost immediately, that this was the place I could make this dream of bringing flamenco to Atlantic Canada come true. The local people here were incredibly welcoming and supportive of this vision.

What is the event’s core mandate?
The mandate is simple: to bring a world-class flamenco festival to Halifax every year that is comparable to ones you could previously only experience in cities like Toronto or New York. What distinguishes our festival from many others is that we bring guest artists directly from Spain – the very root of flamenco. Additionally, the festival offers many activities for the whole family, including free concerts and stage performances that centre on the powerful, centuries old gypsy tradition of flamenco.

What can audiences expect this year?
This year, our 7th annual Fall for Flamenco Festival promises to be one of our most contemporary and non-traditional to date. Our featured performer, David Romero is known to push the boundaries of tradition and is noted for taking risks. In this much anticipated, first-ever Canadian performance, David Romero will highlight his masculine interpretation of the traditionally feminine bata de cola (flamenco dress with a train, fan and shawl) at the Spatz Theatre on Oct 19th.

Flamenco has Celtic roots, does it not?
Flamenco was born in the hills of Andalusia in southern Spain, dating back to the middle ages. Its nomadic Romany origins naturally included performers moving beyond geographical boundaries, picking up numerous cultural traditions that have been woven into the tapestry of the dance. The form itself represents an artistic cross-pollination and cultural exchange that spans Indian, Greek, Roman, Persian and Jewish cultures. Few people are aware there is a Celtic connection as well. Galician Celtic music crossed with music from the South of Spain to form a distinct Galician Celtic form. Galician music has many things in common with Flamenco, for example the rhythms and scales are similar. A prime example is Farruca, one of the many flamenco forms most influenced by Celtic folk music, and remains very common in the region of Galicia, Spain today. The show “Firedance” which combines flamenco and Irish Dance by the renowned Riverdance Company is a prime example of this affinity.

When did you first arrive in Nova Scotia?
I arrived in Nova Scotia a week before Hurricane Juan in 2003, with my husband and family when flamenco was largely unheard of in Halifax. It has since grown to become a thriving dance and music community not just for those with Spanish roots, but for all Atlantic Canadians.

What are your thoughts on Celtic culture here?
Celtic culture is fascinating with its bag pipes and lush landscapes. It reminds me so much of the Atlantic Spanish Coast (Galicia). The music and mentality are very similar to that of Galicia in Spain.

How has the local/regional culture embraced Flamenco?
Flamenco has been extraordinarily well received. Our annual Fall for Flamenco Festival would not be possible without our many generous sponsors, donors and volunteers and the support of the community. It is truly almost a miracle that Halifax hosts one of the largest flamenco festivals in North America.