Four on the Tattoo Floor 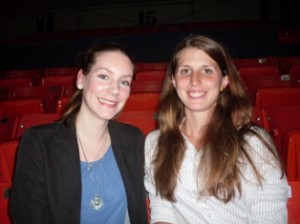 For Nova Scotia-based dancers Alexandra Smith and Megan Bernard, the thrill of performing in the Royal Nova Scotia International Tattoo might be bigger than the event itself.

What is you own ethnic background/heritage?

When did you first become interested in Celtic culture?

Alexandra: Going to the Highland Games was always part of our family’s summer for as long as I can remember. Once I started dancing we would go to more and more events, and as I got older I became more aware and interested in other parts of the Celtic world around me. Now Celtic culture is both my hobby and my livelihood.
Megan: I began dancing when I was six, but at the time it was more about the entertainment and exercise. But over the many years of competitions, shows, and highland games, it was kind of hard to not become absorbed in the Scottish culture. Several of my summers have been spent at the College of Piping on PEI dancing in ceilidhs that were about depicting the traditions and lives of the Scots from back in the day. Now I have also found an interest in other aspects of the Celtic culture…in beer tents, kitchens, and pubs!

Aside from the NS Tattoo, how are you involved with the Celtic community here?

Alexandra: After dancing with the Celtica Highland Dancers for many years I developed my love for performing. From there I became the co-head dancer of the RCMP Pipes & Drums & Dancers, and a founding member of Celtic Sole, a Highland and Step dance performance troupe. I am a tenor drummer in both the RCMP and the 78th Highlanders Pipe bands. Furthermore, I run the dance studio, Wyvern Studios, in Tantallon, which offers both Highland and Step dancing. To top it all off I sew Highland Dance attire for dancers locally and abroad.
Megan: I tried my hand at piping for four years when I turned 13 and again more recently, but decided that living in an apartment building was not conducive to practicing the bagpipes. I am also co-head dancer with the RCMP Pipes & Drums and dancers. Just recently I began snare drumming lessons and hope to start playing with the RCMP pipes & drums in September. Additionally, I am a founding member of the highland and step dance performance group, Celtic Sole, which performs locally and nationally.

How did you get involved with the NS Tattoo?

Exclamations of “the best time of your life!” and “so much fun!” from our tattoo experienced friends enticed us into performing with the tattoo for several years before taking the position as choreographers. As members of the RCMP dance troupe and band we work closely with Wayne Moug who is the pipe major for the RCMP Pipes & Drums and also the director of pipes & drums for the tattoo this year and last.  We think it was a combination of Wayne’s desperation and our ignorance that got us this position. Just kidding! We immensely enjoy the tattoo experience and we love working with Wayne.

What are your roles and responsibilities there?

We began with holding auditions for local dancers and video auditions for non-local dancers in February. Practices have been held weekly since then where we work on the dances that we both spent a heck of a lot of time choreographing. When it got closer to rehearsal time at the metro centre, we organized meals and accommodations for the non-local girls and sketched out and scheduled some extra rehearsal time. During rehearsals at the metro centre, we re-worked 60% of our choreography to fit the last minute music changes, added in a new scene, took it out again, put it back in, and sent a new email every few hours to let the dancers know about the schedule changes.  Once the show starts, we just watch the fun happen…and maybe take a nap between our scenes.

What are the challenges of the gig?

Two words; Teenage attitudes! Also, you know the game telephone? We play that every day. There are a lot of changes that occur daily that come out a bit jumbled or don’t necessarily make it down the chain of command, so we find ourselves at the last minute shouting directions to a bunch of confused dancers. Additionally, we expect the girls to try their best to make it to practices but we don’t expect them to take vacation time from their jobs or school. This means that the only times we have all 43 of our dancers performing together are during the actual tattoo shows. Lastly, the tattoo is a huge time commitment and we are both very busy people outside of tattoo planning.

What are the rewards?

Getting to meet performers from all over the world is probably one of the biggest rewards.  You get to learn about different cultures, and experience many styles of performance.  Choreographing for the tattoo is a nice change of mindset from our more usual undertakings of choreographing for small group numbers.  Of course, giving dancers the opportunity to perform in a large production and getting younger dancers excited about Celtic culture and their style of dance is a great bonus of taking on this task.

What can audiences expect this year?

Our two big scenes are with the pipes and drums. The first begins with a slow waltz, and then breaks into an energetic reel. The second is short but the dancing is upbeat. Our idea was to mix in traditional highland movements with some sharp, eye-catching, military-like arm and head movements.  We are also lucky enough to have a two-minute scene that has a kitchen party theme. It begins with the Baroque and Fiddle string quartet (obviously not your usual kitchen party!) and is joined by a fiddler, piano player, electric guitar, drum kit, and, of course, bagpipes! Add in our Step dancers and Highland dancers, and boom, you got yourself a high-class kitchen party on the metro centre floor.  Overall, the show is high energy, fast-paced, and full of talent.

Somehow the production crew manages to put together a different show every year, despite the fact that the acts and themes are similar or the same as previous years. They know how to throw together a good mix of entertainment that keeps people coming back each year. Also, when you get such a big crew of entertainers together in one space, fresh ideas are bound to overflow.

Why is it an important event for both the Celtic and non-Celtic community here?

The Tattoo is a jam-packed performance with everything from acrobatics to marching bands. It gives people a chance to see things that make them think ‘I want to try that’. This makes it a very important part of our community, just by inspiring people to become part of the community.

What’s next for you personally?

Alexandra: In the near future I am headed to Scotland to compete in the World Pipeband Championships, as well as a few Highland dance competitions.  Looking ahead, I am excited to continue growing my dance school and working with the RCMP Pipes & Drums as well as Celtic Sole.  I am involved with GPI Atlantic, and will be working with them over the next years to create a youth community centre and farm school in the St. Margaret’s Bay community and beyond.
Megan: I am currently working on my Masters in Pathology and I hope to defend around January. I soon will be applying for the Doctor of Naturopathic Medicine program in Ontario. Hopefully that is where I will be in September 2013. I am still very much enjoying dancing with the RCMP Pipes & Drums and Celtic Sole and I plan on continuing to perform with these groups throughout the upcoming months.