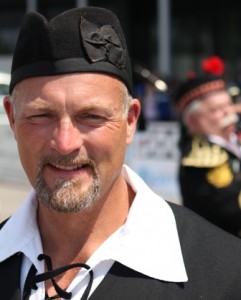 Heavy Events are a vital part of any Highland Games or Celtic festival, attracting athletes from around the world. Here, California thrower Francis Brebner shares his thoughts on this weekend’s Antigonish Highland Games.

What is your own ethnicity / heritage?

I was born in the town of Peterhead in the far north east of Scotland, on my father’s side we can trace our family back to the 1700,s but on my mother’s side of the family is the Mclemons which can be traced back several hundred years to my 22nd generation Great grandfather Edward the Bruce King of Ireland, Edward’s brother was the more well known Robert the Bruce King of Scotland.

What are the rewards of being involved?

Seeing the sport grow and the athletes moving up through the Amateur ranks to the Pro level, also meeting the many people that are part of the games community there.

I think it is very important as this is the impotent roots of their forefathers who immigrated from Scotland to Canada, and along with them they took their Heritage and tradition of the Highland games with them to pass on to their next generation and so on which we see and is being done to the Highest standard period in my opinion.

Highland games has been my life and to be involved with such a World renowned games as Antigonish is an honor.

I am involved with throwing side of Highland games, but if there is any other way I can be of help to the Celtic community there I would be more than happy to be involved.

Are we doing enough to preserve and promote Celtic culture generally?

I think the Antigonish games committee are doing everything possible from what I see to promote the Celtic Culture, and every other important aspect of the games from hosting World Highland games championship vent to the Pipe bands, Highland dancers, etc, which all creates that special atmosphere that Antigonish Highland games certainly possess.

I don’t know if you can improve on perfection, this is how I see the Antigonish games, everything is run by a very unique team that has a great passion and drive for the games and its tradition and this is what makes Antigonish games stand out from any other games around the World. The athletes are always so happy to be competing in Antigonish games as they know from the moment the athletes arrive to the minute they leave that they are all looked after with such kind and friendly hospitality and this is what makes a games stand out from any other games and what Antigonish is most renowned for as well as hosting major World Championship events which has the best athletes from around the World competing.