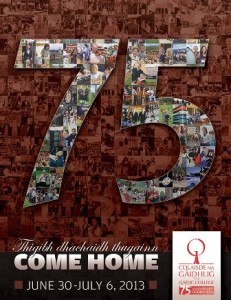 When the pipes and fiddles echo over St. Ann’s Bay on Cape Breton Island this week they will mark three-quarters of a century since farmers and lumberjacks hoisted the first logs to establish Colaside Na Gaidhlig. Rosalie MacEachern takes a look at Nova Scotia’s famed Gaelic College.

Located on a jutting peninsula and accessible via the lovely Cabot Trail that hugs the eastern and western shores of the Cape Breton Highlands, the Gaelic College attracts students from across North America. The pupils come eager to learn the Gaelic once spoken in many of the farmyards and kitchens of eastern Nova Scotia. The language was passed down by the thousands who left the western highlands of Scotland for the New World. When students arrive at the college, some know remnants of the language gleaned from songs or common expressions. Others bring vocabulary and phrases acquired in community classes, universities or on-line courses, while some of the youngest students have learned their Gaelic, a word or two at a time, in Nova Scotia classrooms.

Former Nova Scotia premier Rodney MacDonald, who joined the college as chief executive officer 18 months ago, said the Gaelic College is a centre of excellence for the teaching of Gaelic and the only institution of its kind in North America.

“We’ve organized a week-long festival to celebrate 75 years of operation,” he said. “We’ll be showcasing the language but also the music and traditional crafts of the college. We’ve not forgotten our roots and we’re calling people everywhere to come home.”

Language training is only part of what the college offers and the music of the Cape Breton Highlands is never far away. There are programs in piping, small pipes, whistle, harp, guitar and fiddle as well as in Gaelic song, step dancing, highland dancing, drama and story-telling. Music can be heard emanating from classrooms and at outdoor evening jam sessions and after-hours parties.

Traditional weaving is also taught and products are sold in the campus craft shop where visitors can search through a wide selection of clan tartans and perhaps purchase a kilt.

Alex Morrison, a retired military officer who chairs the college board of governors, said MacDonald’s appointment has sparked a period of renewal on the 80-acre property.

“We’re getting back into the world, modernizing our residences, sprucing up our facilities and enhancing our landscaping,” he said. “We’re extending the invitation to anyone who wants to experience the language, the music, the culture, to come visit us and stay awhile.”

Anna C. MacDonald, the college’s marketing director, is emblematic of a new directive that all staff must speak some Gaelic.

“I studied Gaelic in university for three years so I had a base to build on and I’m continuing to learn on the job,” she said.

The college had its rudimentary beginnings in a log cabin in 1938, its construction overseen by the Rev. A.W. R. MacKenzie, a Presbyterian minister who left his home on the Isle of Skye to seek his fortune in North America. When he arrived in rural Cape Breton he was captivated by the story of another Presbyterian minister who had settled on the site of the college eighty years earlier. Three decades after establishing a community on the peninsula, the zealous and autocratic Rev. Norman MacLeod led his people, beset by crop failure and hunger, to better prospects in New Zealand.

MacKenzie, who had no Gaelic himself, built the college in hopes of anchoring the language  against the growing threats of economic hardship, outmigration, an English-only education system and the widespread perception that Gaelic was a language equated with poverty and backwardness. His own passion for the college inspired the people of the area, who had little in the way of money, to volunteer their time and labour.

“He managed to evoke a latent pride in the Scottish descendants of the area and it is a pride in our college that continues to this day,” said Morrison.

Some of Cape Breton’s finest musicians, including singer Jimmy Rankin, fiddler Ashley MacIsaac and fiddler and pianist Wendy MacIsaac will be on hand for the June 30 to July 6 anniversary celebrations, as will Gaelic singer Mary Jane Lamond, fiddlers Kinnon and Andrea Beaton and the Celtic fusion band Sprag Session.

CEO MacDonald said the enthusiasm for the celebration has already convinced him that from now on a concert will be held to mark the start of each summer.

“We’ll do it all again next year,” he said. “We’re open year-round with immersion and instruction programs but summer is our peak season for visitors. Our concerts will kick off the summer and Celtic Colours (an international music festival held in Cape Breton each October) will be the other bookend.”