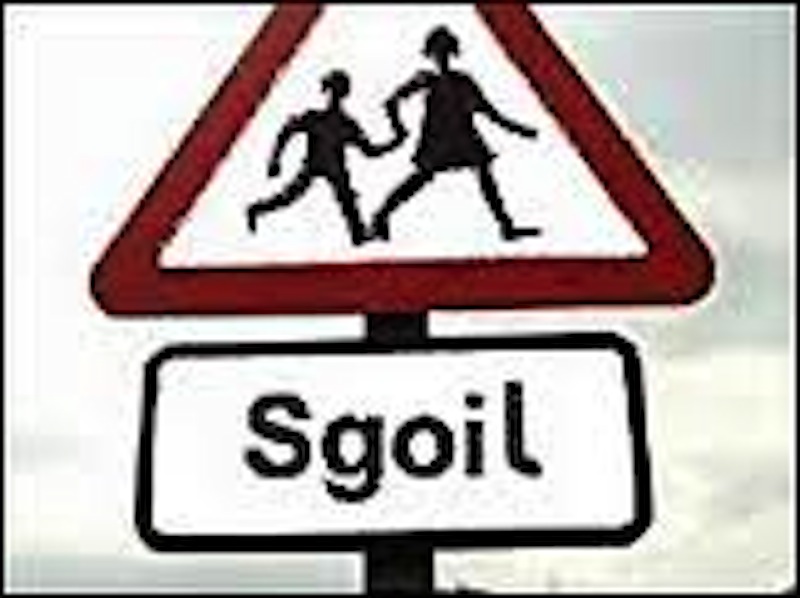 In the second instalment of a two-part feature article, Rosalie MacEachern looks at the educational programs that are revitalizing Gaelic along parts of Canada’s east coast.

The fortunes of the Antigonish Gaelic program took a dramatic upswing almost six years ago when an energetic young teacher from Scotland’s Black Isle arrived. Mairi Parr’s mother is a native Gaelic speaker from the Isle of Skye and she raised her children to speak the language. Parr studied Gaelic after graduating high school and spent a term at University College, Cape Breton.

“I had such a wonderful time in Nova Scotia I was desperate to come back someday. My boyfriend was studying in Cape Breton when I saw the job posted. It was April Fools’ Day, and I was certain it must be a joke, but here I am,” she said with a laugh.

Parr vividly remembers her first day teaching in Antigonish.  She began teaching at Saint Andrew Junior School but moved with the students to Dr. John Hugh Gillis Regional High School. “I met the double of a boy I’d just taught in Fort William and when I asked him his name, wasn’t it Chisholm, the same as the boy I taught in Scotland.”

Parr said most of her students are unaccustomed to the language, although a few have a relative who speaks it and many, but not all, are descendants of Gaelic speakers.

“What most of them have is a great familiarity with the culture, the music and maybe the dancing. Many of them also have a good sense of the history and that has been very useful in learning the language,” she said.

Brian MacDonald’s daughter Anna, who started in the after-school program, credits Parr with bringing her to an appreciation of the ancient language.

“I didn’t love it in the beginning, but Ms. Parr gave us a lot of encouragement. Her way of teaching attracted more students and it got to be more interesting,” she said.

Anna and Parr, who has taught some of the graduates since Grade Eight, agree the students did not appreciate how much Gaelic they had acquired until they took a trip to Scotland before graduation.

“We went to all the historical places and Ms. Parr’s grandparents’ farm on Skye. The trip was really special,” Anna said.

Another graduating student, Megan MacKenzie, was impressed by the welcome the students received in Scotland.

“The Scottish people wanted us to see everything. They were very nice to us, very welcoming and encouraging us to speak Gaelic,” she said.

“I can remember family gatherings with aunts and uncles, all in the dining room, speaking Gaelic. After a few minutes they would be roaring with laughter but if you asked what was so funny you’d be told it didn’t translate well. At the time I didn’t have the inclination to learn but I regretted it later and when I heard about this program I was anxious for Megan to learn,” she said.

Megan admits she was intimidated, given that some of her older relatives are fluent Gaelic speakers and scholars.

“I didn’t agree until some of my friends said they were going to take Gaelic. I was worried about how well I might do,” she said.

“It is wonderful to see a class of Gaelic learners graduating. I am sure Megan and the other graduates have been enriched by their experience,” she said.

Sister MacDonell acknowledged the view that Gaelic would “prevent you from getting along in the world” was once prevalent in Nova Scotia.

“I did not experience that growing up in Judique where we learned our Gaelic at home and our English at school, but I know it was the case in other communities where a sense of inferiority was cultivated and it became infectious. It was wrong, of course. We need look no further than St. F.X. where the founders and leaders for many, many years were all Gaelic speakers. It did not stop them from getting ahead,” she said.

Dr. Michael Linkletter, current chairman of the Celtic studies department, said it is wonderful to see young people learning the language and expressed hope that some of them will continue their studies at St. F.X.

“The Celtic studies department at St. F.X. has long had close ties with the Gaelic community in Nova Scotia, and a number of the people closely involved with the promotion, preservation and promulgation of the language in our province have come through our program,” he said.

St. F.X. is one of few North American universities to offer studies in Celtic languages, literature and history and the only one to offer four years of Scottish Gaelic. The university has also digitized the Cape Breton Folklore Collection, containing 1,600 songs and stories from native Gaelic speakers representing 100 communities, a project co-ordinated by librarian Rita Campbell.

“Gael Stream, Sruth nan Gaidheal, gives new learners an on-line opportunity to hear the dialects of various areas while learning customs, traditions and songs from people raised in the Gaelic language,” she said of the collection which is available at gaelstream.stfx.ca