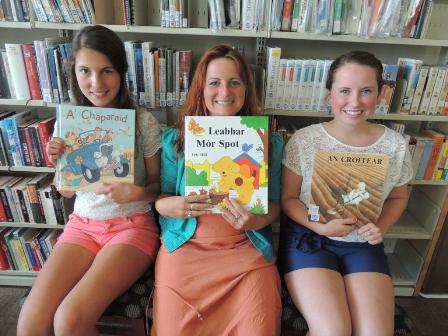 Gaelic, once considered the language of the poor, the backward and the aged, is now tripping from the tongues of teenagers in Antigonish County, Nova Scotia. In this first instalment of a two-part feature article, Rosalie MacEachern looks at the educational programs that are revitalizing the language along parts of Canada’s east coast.

Antigonish, the home of St. Francis Xavier University, is a small Nova Scotia town with strong Scottish roots. Its Highland character is preserved in the surrounding place names as well as in the surnames of many of its families and in the character of the Antigonish Highland Games, now 150 years old. The Gaelic language of the town’s forebears, however, has been largely silent for generations, so it is not surprising that there is great satisfaction in the recent graduation of a class of Gaelic learners from Dr. John Hugh Gillis Regional High School.

“They are the first Core Gaelic graduates in North America,” said parent Brian MacDonald who pressed the local school board to offer Gaelic as an alternative to Core French.

The seeds of the Core Gaelic program were sown in St. Andrew’s, 10km from Antigonish where, 200 years earlier, pioneers from the Highlands and islands of Scotland’s west coast struggled to clear enough land to feed their families while petitioning for a Gaelic-speaking priest to live among them.  Many years later, in 2005, a provincial grant was secured for an after-school Gaelic program at St. Andrew’s Consolidated School.

“It was a beginning. It gave children an exposure to the language and it gave us an opportunity to build interest and figure out how we could make Gaelic part of the school curriculum,” MacDonald said.

A 2006 cultural program that brought multi-generational Gaelic-speaking families from Scotland to several Nova Scotia communities was pivotal in increasing interest, he added. “We had a prize-winning float, featuring our visitors and our own children, in the Highland Games parade and the interest grew from there.”

MacDonald, a school administrator, collected 500 letters from students expressing their interest in Core Gaelic as an option to Core French which is mandatory in Nova Scotia schools from Grades Four through Nine. The province responded by announcing that a Core Gaelic program would meet its second language requirements. The province also established curriculum guidelines for Grades 10, 11 and 12.

MacDonald, whose early memories of the language are restricted to hearing his mother speaking with her sisters on a party line in Cape Breton, said Antigonish area parents learned from the experience of schools in nearby Cape Breton that previously offered Gaelic.

“Gaelic was offered in some Cape Breton schools but was often reduced in hours to accommodate other subjects. It took a back seat to other classes and was the last class to be fit into a tight schedule. We wanted Gaelic offered just like Core French is offered, with a set number of class hours per cycle, and that is the status we got,” he said, adding that Cape Breton schools have since adopted the Core Gaelic model.

By September this year, 260 students will be studying Gaelic at four Antigonish County schools.