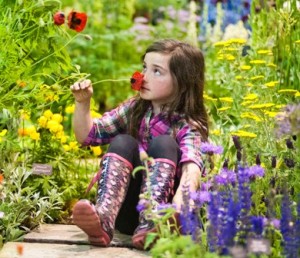 Gardening is popular in Scotland and becoming more so, although the challenging climate presents such different conditions across the country that Scotland’s gardens vary widely.

“We have some fantastic gardeners. We have a lot of Alpine plant enthusiasts – high-altitude plants can thrive here,” said Agnes Stevenson, communications manager for the event Gardening Scotland, a big annual celebration of gardening and outdoor living. Now in its 14th year, the event will occur during the first weekend of June at the Royal Highland Centre in Edinburgh.

Gardening Scotland is the first show after the prestigious Chelsea Flower Show, held in London every spring, and it represents the first chance to buy plants exhibited, but not sold at Chelsea, Agnes said. Nursery owners sell an amazing array of plants, both every day and exotic species, some of which they’ve introduced to cultivation themselves.

“Gardeners have a quiet image but many of them are very intrepid,” said Agnes.  “It’s fantastic; some of these gardeners have been in remote parts of the world. They’ve been kidnapped and survived. They stand there in their anoraks looking benign, but they’ve been so adventurous…One fell off a mountain in China and ended up in Burma. He was lost in Burma for a week before he stumbled back into China – and all so we can have lovely gardens.”

These lovely gardens take some nurturing but they can thrive. On Scotland’s west coast, the warming influence of North Atlantic Drift means that South African plants can be grown, even though the area is at the same latitude as parts of Alaska.  Argyle has areas of temperate rainforest, also known as the Celtic Rainforest.

“The west coast has ferns and mosses, it drips with water,” said Agnes. “The east coast is dry and colder. The Highlands in the central area are wilderness, although good gardens are found in the foothills.”

Maybe it’s a symptom of these tough economic times, but gardening is growing in popularity in part because more Scots are growing their own fruit and vegetables. Perthshire, Fife and Tayside famously provide good conditions for growing soft fruit, especially raspberries, strawberries and blackcurrants.

Wildflowers and grasses are popular as are Rhododendrons, and they grow well in moderate conditions. Blue Poppies from the Himalayas, aka Meconopsis, thrive in cool, moist conditions.  Snowdrops, which traditionally grow in sheets beneath Scottish woodlands, are another favourite, and Scotland has more than 50 snowdrop gardens that open to the public during the annual Scottish Snowdrop Festival held in February and March.

Some gardeners are hybridizing snowdrops, which are sought after by collectors who pay as much as £50 (about Can$80) for one bulb. Agnes said that £275 (about Can$440) is the record price paid for one hybridized snowdrop bulb.

All of this will be celebrated at Gardening Scotland. Every year, the event draws around 40,000 people, including large numbers of repeat visitors and families drawn to complementary events, such as the bonsai exhibition, the artisan food products and the cookery theatre, run by the Federation of Chefs of Scotland.

“It’s a good time and the best plant sale in the country,” said Agnes.