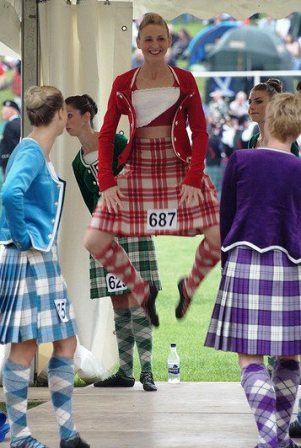 A native of Westhill, near Aberdeen, Scotland, Gemma Baillie has competed and performed across Europe and Canada but these days she sits behind the judging table watching other dancers execute their steps.

Recently, she stopped in Antigonish, NS, to adjudicate a competition and lecture premier dancers.

“I was in Antigonish as a dancer in 2005 and danced with some excellent dancers, so it was interesting to be back in the town as a judge,” she said, adding she met Antigonish dance teacher, choreographer and adjudicator Janice Macquarrie at international dance events.

Baillie has been adjudicating across Canada and the United States while completing a postdoctoral fellowship in pharmacology at the University of Toronto.

“Dance opened many doors for me. It has taken me places I might never have gone and it certainly made it easier to move to another country. Within a short time I had a group of Toronto dancers to practice with to keep up my fitness and technique.”

Baillie began dancing at the age of seven with no idea she would three times place among the world’s top six highland dancers.

“I have my older sister to thank as I followed her into highland dancing lessons. She didn’t really like it and quit after a year but I loved it from the first steps.”

Baillie was 11-years-old, taking lessons in Aberdeen, when she was awed by champion Scottish dancer Deryck Mitchelson.

“He was so full of energy, amazing to watch. I wanted to dance like him so I began taking lessons from his mother, Wilma Tolmie, who had taught him,” Baillie said. “She was in Dundee, which is about 90 minutes from Westhill, but my parents were very supportive and made the trip for lessons twice a week.”

“Things seemed to click for me as I got older and I actually did my best competitive dancing when I was working on my PhD,” she said. “With so much school work, dancing was a release and I placed in the world’s top six in 2008 and 2009, as well as in 2003.”

Apart from the competitive dancing which took Baillie to the top events in Scotland, England, Ireland, Belgium and Canada, she has frequently performed in folk festivals and dance shows.

“The festivals are a wonderful opportunity to develop creativity and choreography. As a young dancer I’d go with my teacher to France, Belgium, Spain and Sardinia and it was tremendous fun,” she said. “We’d perform our own numbers but we were also very often inspired by other performers.”

She twice performed in New York’s renowned Tartan Week; once with another highland dancer and a hiphop group from Edinburgh, and once with a troupe of 11 Scottish dancers. Equally memorable was dancing at Beijing’s International Tourism Festival.

“In Canada, America and the European countries where I have danced, there was some awareness of highland music and dancing, but in Beijing we were quite unusual,” she said. “It was amazing, though, to demonstrate our culture and to watch performances from so many different cultures.”

Before coming to Canada, Baillie began teaching and became an adjudicator with the Scottish Official Board of Highland Dance (SOBHD).

“Initially, I found it challenging to go from competitive dancing to judging but it gets more enjoyable with experience. It is always interesting to see the styles and variety among dancers.”

Through the years Baillie has used her profile as a world class dancer to raise money for Duchenne muscular dystrophy, multiple sclerosis and breast cancer, most notably with the Assemble and Leap show which marked the SOBHD’s 60th year.

With her post doctoral fellowship completed, Baillie is beginning work as an assay development scientist at the University of Dundee in Newhouse, but it is unlikely that will keep her away from the dance studio or the judges’ table.