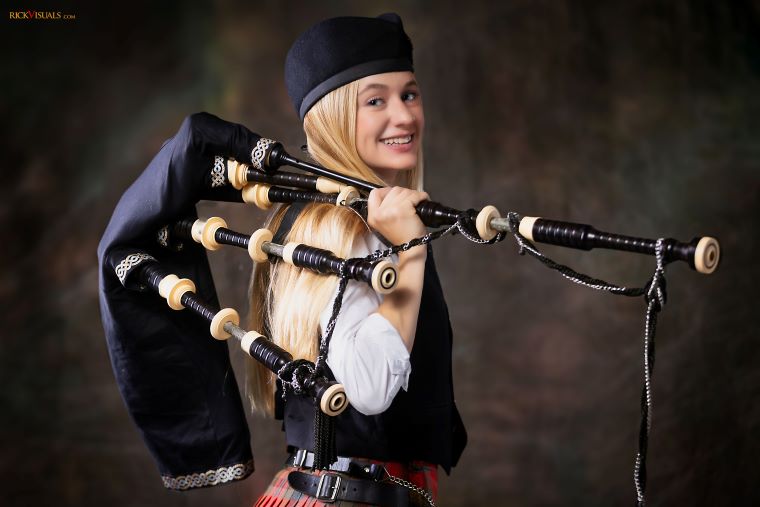 One morning in 2010, an 11-year-old girl of Scottish descent arrived at school to learn that free piping lessons were being offered after classes. She signed up and quickly became “hooked.”

The school was Dunedin Middle School in Florida, and the girl was Gemma Briggs.

Briggs, now 23, hasn’t stopped piping since then. She fondly recalls her first few months learning the instrument as part of her 6th grade pipe band, under the tutelage of her teacher Sandy Keith.

“I would never have had access to the instrument otherwise,” she tells Celtic Life International by email, adding – with a chuckle – that she has been a piper since she was ¾ the size of the ¾ pipes. “There were times that I was more enthusiastic than others, but I have always deeply identified with the pipes and being a piper. And, if piping wasn’t so difficult at times, I don’t think it would have nearly the same charm.”

Today – donning her Ancient Payne tartan and plying away at a set of Peter Henderson drones – Briggs runs her own bagpipe business out of Tampa Bay, offering traditional pipe music for a variety of services.

She admits that carving a career out of a hobby hasn’t been without its issues.

“The biggest challenge for me has been putting myself out there. Every piper has run into that jerk at a gig that wants to tell you how much they hate the sound, or how you are not in tune, or some other rude comment. Anything unique is going to have lovers and haters, and I have found this especially true – some people think you are the best thing since sliced bread and some will chase you off a street corner for busking.”

She adds that the COVID-19 pandemic hasn’t helped.

Despite it the difficulties, however, her career has had no shortage of highlights. When she was only 14 years of age, she performed at the University of Florida with renowned Galician piper Carlos Nunez. She has also performed at a variety of festivals and events across the USA. Most recently, she participated in a tribute concert, which raised $14K for Ukrainian war relief.

She notes that the freedom of working for herself and the satisfaction of building her own business is what keeps her going.

“I never thought that it was possible to make it as a musician, and the more that I lean into the dream, the more opportunities appear. There is no rush like performing – and I find that it is a lot easier to slip into spontaneous opportunities as a soloist.”

Briggs believes there is a keen interest in piping among young people, but notes that more can be done to raise the instrument’s profile.

“Scottish culture has become very popular in the media, and while there is an increased interest, I am not sure that this has translated into new piping programs for youth. I hope that this can be improved by a greater cultural appreciation of the bagpipes in North America, which was heavily settled by Scots and Irish. I see this appreciation growing, and hope that it continues into private groups and municipalities investing in the Scottish arts.

“Young professional pipers have a lot to do with getting youth involved,” she continues. “It breaks the stereotype of the instrument being something ‘old’ and the traditional being ‘boring.’ The Red Hot Chili Pipers are a perfect example of this. I admire their work in making the bagpipes relevant to a younger audience that might not have been previously exposed.”

“My plans are to grow my in-person performances, my online presence, and focus on competition to move up to Grade 1. Becoming an open piper has been a dream of mine since I started playing. I also want to improve my recording so that I can create original music incorporating the bagpipes and the other instruments I play – keyboards, guitar, electric bass, and vocals. I want to grow my YouTube Channel, Facebook, and Instagram so that I can reach more people and challenge their ideas of what bagpipe music is and what bagpipe players look like. I will also continue to take lessons and teach beginning players: I believe that there is always someone to learn from and someone to teach.”