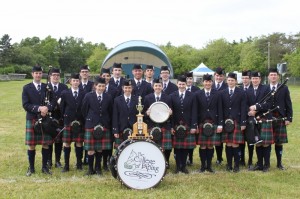 The College of Piping & Celtic Performing Arts of Canada in Summerside, PEI has developed a world-class reputation as an international school of excellence in Highland bagpiping, Scottish-style drumming, Highland dancing and Island step dancing. Since its inception in 1990, students from all over the world have come to learn traditional Celtic arts, passed down from generation to generation. Recently we spoke with the institution’s executive director Karen Hatcher about what the College has on tap this summer, including its annual Highland Gathering which begins this Sunday night.

What is your own ethnic heritage/background?
Scottish roots – MacLean, MacDonald and MacKenzie – on my mother’s side. The kilts that my brothers and I wear are MacLean Ancient Hunting – in honour of my maternal grandmother. As a child, the bagpipes rang out to me. Our summer cottage was in Pictou County, home of my mother. Every parade we attended during the summer left me anxiously waiting for the pipe bands to come down the street. When we moved to Cape Breton (home of my father) my mother made arrangements for me to start taking chanter lessons. I became involved with the Cape Breton Gaelic Society Pipes and Drums in Sydney.

How long have you been involved with the college and in what capacity?
I returned to Summerside in February 2010to take on the position of Executive Director at The College of Piping and Celtic Performing Arts of Canada.

What are the challenges of the job?
This is the most challenging job of my career; my professional life and my hobby of playing the bagpipes have merged. The College of Piping and Celtic Performing Arts of Canada is a very unique facility – the only one of its kind in North America.  We teach year round in our four primary disciplines– Highland Bagpipes, Highland Snare Drum, Highland Dance and Island Step Dancing. This past year, we taught 267 classes per week in these four disciplines. In addition to teaching, we produce events throughout the year, ranging from casual ceilidhs to gala fund-raising dinners.

What are the rewards?
The rewards are overwhelming –watching the progress of every student and being a part of their growth in performance

What can attendees expect to experience during this year’s Highland Gathering?
The Summerside Highland Gathering will be launched this year with the Barra MacNeils – live and in concert in the Mary Ellen Burns Amphitheatre at The College of Piping. In addition to the three days of piping, drumming, Highland dance and step dance competitions, east coast favourites, including The Richard Wood Trio, Ward MacDonald, Ryanand Boyd MacNeil and Visten will be featured in the Entertainment Tent. Over the weekend, our massed pipe band, with approximately 200 pipers and drummers, will march on to the competition field to perform. It is a weekend of family fun and entertainment.

What can they expect during the run of Highland Storm?
Under the Artistic Direction of Ryan MacNeil, of the Barra MacNeils, Highland Storm is comprised of several high-energy production pieces woven seamlessly together through Celtic music and dance. Visitors will be captivated by the fast-paced feet of the Highland and step dancers, stirred by the sounds of the pipes and drums, and soothed by the sweet voice of Rachel Jackshaw, with her stirring love ballads and rhythmical work-songs.

Are young people still interested in Celtic culture?
Our shows, created annually as a vehicle to provide emerging and established Island artists with an opportunity to perform in professionally produced shows. Year after year, the spirit of young artists who embrace their heritage with an infectious enthusiasm inspires locals and visitors alike! Highland Storm provides Island youth with a significant opportunity to nurture their artistic skills, broaden their repertoires, further their understanding of teamwork and commitment, build self-esteem and be publicly recognized for their unique artistic talents.