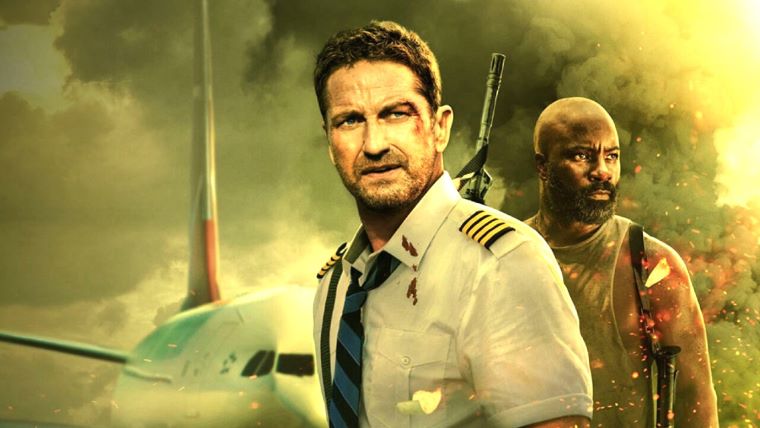 Gerard Butler knows exactly what kind of movie Plane is, and he’s proud of it.

“I love making this kind of movie, and I feel like I’ve become quite known for it,” he says. “I remember Robert Downey Jr., when he saw Olympus Has Fallen, he wrote me a beautiful email and he said, ‘This is the kind of movie that we miss so much, when the audiences are cheering, they’re throwing stuff at the screen, they’re shouting.’ And that’s what [Plane] is. It’s an experience.”

Directed by Jean-François Richet, the film stars Butler as Captain Brodie Torrance, who’s looking forward to a quiet New Year’s Eve flight to Tokyo when technical issues force him to land on a remote Philippines island controlled by a violent militia. Not only that, but one of the plane’s passengers is the mysterious Louis Gaspare (Mike Colter), a fugitive from justice who’s not interested in being caught again by the authorities.

Can Brodie and Louis get their people off that island safely? It’s the simple question at the center of the film, one Butler and Colter both refer to as “a throwback from the ’90s.”

As Butler adds, “I’ve been to many screenings now and I’ve seen how the audience responds. And it really has it all. It has disaster. It has action, it has survival elements. It’s very funny, and it’s very moving, and it has complex characters that are human, that make mistakes. And that’s somebody that’s very relatable for the audience. So it just felt like something where we could really take the audience on a joy ride and have them on the edge of their seats. And that’s the response we’ve been getting.”

Theater audiences are already enjoying the trailer for Plane, especially thanks to the way it ultimately reveals the film’s title — one which stands out for its simplicity. But it could have been a little less simple. 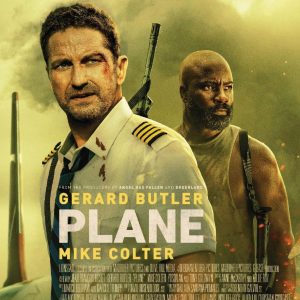 Butler says that the title of the film was Plane during the two years of development that preceded its making, but then “when we started filming, suddenly on the script [and the call sheet] it said The Plane. And I never really thought anything about it, but then when we came to actually release it, there was talk of changing the title and I said, I’m happy to change it to Plane. I don’t love THE Plane, and I don’t want to change it to anything else.”

To be clear, Butler knows “the title’s not for everyone.” However, he adds, “some people love it. We love it. And we decided on that title a day and a half before it went up on the big screen. They were like, if we don’t decide in the next four minutes, they can’t change it. We have to put [the trailer] up with maybe Black Adam.”

Colter confessed that during production, he thought it was a working title, “but it grew on me. I mean, I couldn’t think of anything better. I thought that was the best title for it, because once you get used to a title… If you’re changing it for the better, it’s great. But I don’t think there was a better title and, and regardless of whether people love it or have some weird reaction to it, you can’t forget it. How are you going to forget that title? Which is half the problem with most great movies. You try to [give it] a title that’s got six or seven words in it — can’t remember it.”

“So yeah,” Butler says. “You’re not forgetting this title.”

At this point, I brought up something that FX Networks president John Landgraf said at the 2020 TCA press tour about FX shows often featuring relatively generic titles, like Dave or Atlanta — that if a perfect and unique title doesn’t immediately present itself, then instead of attempting to pick a unique but mediocre title, “it’s actually better at that point to choose a title that’s relatively generic because that generic title then, if the show is great, can absorb [meaning] over time.”

Butler instantly agreed with Landgraf’s position, noting, “I actually had a kind of a fight with the studio about this, because they were looking at other names. But I said, ‘I feel like this title allows you to… imbue [the film] with that kind of sensibility.’”

Adds Colter, “I watch some of those FX shows and it’s true. The ones I think about right now, it is like, oh yeah, that’s exactly what it is.”

After the experience of Plane, Colter admits he might be tempted to revisit this genre in the future. “It’s funny because part of me is always like, ‘Hey, keep changing it up. Find something different. Don’t do the same thing twice,’” he says. “But then this is the first time where I went, ‘Oh, this is a really interesting genre.’ I love having this idea where you do have a multitude of things that you do, but sometimes when something feels good — it’s nice to do something in the same vein more than once.” 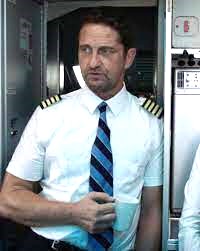 Also, he says, “It’s not like I’m fatigued of these sorts of projects. Because again, it feels fresh because it feels like a revisitation of something that I used to love growing up — the movies that I grew up watching, the Die Hards and Predators. At the end of the day, it’s about the characters. Do you care who is getting punched in the face? Do you care who’s getting choked? Do you care who’s on the run? When you invest in those characters, that’s what makes the whole movie work. It doesn’t really matter how many explosions you have — the cinematography and the CGI and all that stuff, that’s nice. But if you don’t care about who’s on there on that screen, you’re gonna be in trouble.”

Butler, at this point, pointed out that he does care about who gets punched in the face — specifically, “Hopefully it’s him and not me. I care immensely [about that].”

“Recently I’ve moved away from maybe the Mike Banning-style characters, the ones that are experts,” Butler says, describing his role in the Has Fallen films. “I’m playing more everyman people, ordinary people in extraordinary circumstances. Because I love the fact that that’s something that an audience can really identify with, unlike perhaps superhero movies. Which is still great fun, but you know, you’re not Batman. Whereas you could be Louis Gaspare. You could be Captain Brodie Torrance.”