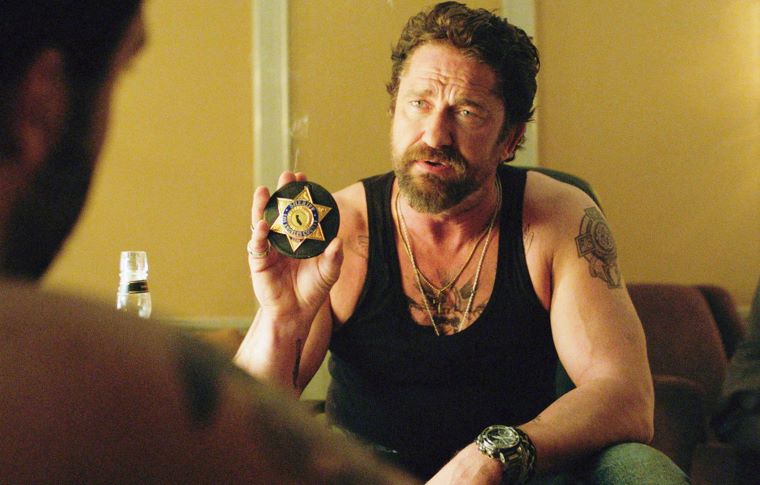 One night, when he was 15 years old, Gerard Butler dreamed about the movie Krull. The 1983 science fiction saga, which he calls “a cheap version of Lord of the Rings,” earned poor reviews and flopped at the box office. But its ambitious, anachronistic fantasy—about a valiant prince leading his army against an evil creature—made a deep impression. Its castles and sweeping landscapes nestled inside his teenage subconscious, and Butler awoke consumed with a desire to be an actor—and to continue living in those worlds.

“I’ve always been guided by dreams,” Butler tells me. “I knew I wanted to tell those stories—to have some sense of renewed courage and excitement and curiosity, or a wish to be more of a warrior or hero.”

It’s a funny, bite-size actor origin story, one that nurtured Butler as a Scottish adolescent and has remained a prominent influence throughout his long Hollywood career. That’s included high-decibel theatrics, like his breakout as King Leonidas in the 2004 epic 300, and droll performances in a handful of mediocre late-aughts romantic comedies that failed to establish him as a leading man. Over the past decade, however, his dream to feel like “more of a warrior or hero” has taken on near-literal significance. Along with peers like Liam Neeson and Mark Wahlberg, Butler has carved his own specific niche: Where Wahlberg is an earthbound superhero, and Neeson a very angry dad, Butler is an everyman action hero, saving the world with a charming-if-forgettable on-screen persona. In the process, he’s become a bankable star, capable of anchoring, and occasionally elevating, numerous mid-budget disaster flicks.

Greenland is the latest variation on his macho theme—and though it offers a slight departure from Butler’s gun-blazing and ass-kicking, he remains the heroic center of a family caught in an apocalyptic hellscape. His foe here, unlike the requisite foreign and domestic terrorists he’s previously defeated, is an extinction-level comet plummeting to Earth. This requires a different kind of counterattack, because “he’s not going to go up and punch this comet in the face,” Butler says, laughing, on a Zoom call with the movie’s director, Ric Roman Waugh. In the midst of marital strife, his character, John Garrity, must transport his wife and son from their suburban Atlanta home to an undisclosed government bunker, avoiding fireballs, separations, and mass hysteria. It requires physicality, sure, but the story leans more on Butler’s protective nature. “True masculinity is a man that is not afraid to show his vulnerabilities and to confront his demons,” Waugh says. “I’m going to try to convey complex issues, and he’s going to play them in a very honest and sincere way.” 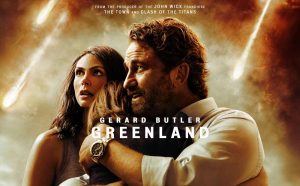 Those qualities—and most of Butler’s mid-/late-career renaissance—trace back to his role as Secret Service agent Mike Banning, the chiseled ex–Army Ranger who marked Butler’s ascent (descent?) to bruised superheroism. In what would become an unlikely franchise, 2013’s Olympus Has Fallen featured Butler as a disgraced presidential detail member who climbs back into duty to save the commander-in-chief—and Washington, D.C.—from rogue North Korean terrorists planning to obtain the country’s nukes. He performed similar duties in the 2016 sequel, London Has Fallen, another jingoistic fantasy. Much the same happens in the third entry, 2019’s Angel Has Fallen (directed by Waugh, starting their collaboration). In between those films, which earned a collective $523 million worldwide, Butler has traveled to space to prevent a weather-induced holocaust in 2017’s Geostorm (another $222 million globally), and plunged beneath the ocean to prevent World War III in 2018’s Hunter Killer. By now it’s obvious. If the world is on the brink of annihilation, and the Avengers are busy, you could do worse than Butler.

He’s been plotting this for a while. Butler met his creative partner and longtime producer, Alan Siegel, early in his career, but the pair didn’t officially team up until 2009, when they received the script for Law Abiding Citizen. A month later, they had sold and financed the movie, and quickly opened a production company. “I felt like he would have more of a say in what he can do,” Siegel says. “We wouldn’t have to wait for the phone to ring, we wouldn’t have to start selling him to the world—we could create our own projects.” Since then, Siegel has executive-produced nearly every one of Butler’s movies, and has played a crucial role in curating the actor’s cinematic identity. “We go out and look for screenplays that we would want to see in the movie theater, that we would get excited about,” he says. “Most people are excited to go to the theater to see Gerry doing what Gerry does best.”

Through it all, Butler’s best asset remains his unflinching and charismatic humor. Like all action stars, he thrives on subtle, abbreviated payoffs. In an early London Has Fallen sequence, Banning takes a morning jog with the president, running backwards to showboat. “Seriously? What the hell do they make you out of?” the president asks him.

“Bourbon and poor choices,” Butler replies, instantly smiling. The joke is cowboy, no-nonsense machismo—and much like the franchise, it caters to a conservative, dad-core demographic. It’s easy to imagine laughing over beers with Banning, and then watching him throw a belligerent patron onto a table if necessary. “People don’t normally come into rooms like him,” says Siegel. “He’s got this great look about him, and he’s got this fierceness, this boldness, and this honesty… You can see there’s tension and more tension, and then Gerry cracks a joke and we’re able to breathe.”

Indeed, underneath the punching and punchlines, Butler has articulated a vaguely political sensibility: He’s performing a sort of gun-toting patriotism, fighting political corruption, redeeming his past mistakes, and turning his insubordination into a virtue. Throughout all these movies, which range in quality, conspiracy lurks around every corner, nobody can be trusted, and family issues are the sacrificial consequences of the profession. Though his John McClain hand-me-down doesn’t wear a red hat, he feels like a product of the Trump era—emboldened to “restore” America’s greatness at all costs. The role wouldn’t make sense for the regal stardom of peers like Keanu Reeves. Instead, Butler’s weathered face and garbled accent have produced a populist, attainable model of action hero. He’s flawed. But he owns it. 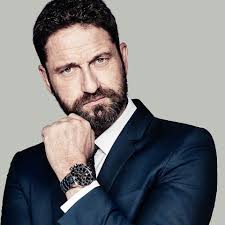 Of course, it’s not all charming quips. In Greenland, when comet shrapnel begins showering across a major highway, Butler barrels through the smoldering traffic and swerves the family minivan around fire bombs. The bombs aren’t real—but Butler is the guy behind the wheel. “I’m literally driving and I’m being told beforehand, Don’t go there because you’ll blow up,” Butler says. “It’s very visceral for me.” He’s become adept at imagining the CGI, too, a skill he learned shooting 300. “Suddenly I was facing off against armies that were makeup artists in the back, and the evil Xerxes was stuck to the roof,” he remembers. “You quickly learn to think on your feet and use your instinctive emotion to [handle] those situations.”

Waugh has always appreciated Butler’s willingness to perform various stunts—specifically ones, like driving, that require simultaneous acting—even when they have harmful side effects. “Suddenly, I’m doing action through a dramatic point of view, and emotional point of view,” the director says. Despite an off-set motorcycle accident in 2017, in which he was thrown from his bike, Butler, now 51, hasn’t slowed down in his pursuit of these intensive projects. “I duct-tape him up, and then I put him on a plane, and we ship him somewhere, and then he has no choice,” Waugh says, laughing.

“I don’t know if you would call it fearless,” Butler says. “But I’m always up for the challenge.”

Over time, Butler has considered following other actors’ on-screen paths. “I liked where [Matthew] McConaughey went, from making movies like Contact, then into movies like Mud,” he says. “He just re-created himself. Perhaps [I’d like] something like that, moving into more characterful performances and maybe smaller movies.” But then he clarifies: “If you can get both, then you’re on to a winner.”

Because, ultimately, all these everyman permutations and personality traits—all the cocky wisecracks, protective instincts, and excessive brutality—still give him joy. Look no further than Den of Thieves, the 2018 poor man’s reimagining of Heat, in which he plays a trigger-happy, live-wire detective in charge of outsmarting and outshooting bank robbers. As “Big Nick,” he matches a disregard for policing protocol with unflinching bravery under fire, sticking it to both the higher authorities he resents and the criminals he pursues. It’s the campy culmination of Butler’s reinvention—he’s playing with matches, extinguishing the flames, and infusing the subgenre with a crackling, cavalier energy. And it’s not stopping anytime soon. The movie’s sequel—the bonkers-sounding Den of Thieves 2: Pantera—has already been written, and a third collaboration with Waugh is also on the way. Though Butler might not be wearing a knight’s armor or taking on CGI monsters, he’s still chasing his teenage dream—and still, thankfully, giving oxygen to the everyman’s heroic last gasps.