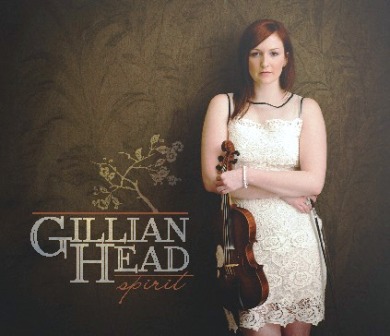 With an interpretation, style, and energy all her own, Nova Scotia fiddler Gillian Head delights audiences. Her influences include the variation and modern style of contemporary fiddlers, as well as the strong roots of the old traditional fiddlers of her native Cape Breton Island. Recently we spoke with her about her passion, profession and debut recording Spirit.

What are your own roots?
Mostly Irish. I’m sure there are bits and pieces of others in there as well!

How, when and why did you get involved with fiddling?
I started step-dancing around age 7 and I absolutely loved it. I had a couple of fiddle CDs that I used to practice to. The Ashley MacIsaac album “Close to the Floor” was my absolute favourite. It’s what made me want to play.

Are they the same reasons you do it today?
I still love dancing, and music that makes you want to dance! In Cape Breton, music and dance go hand in hand. So I suppose, yeah, it’s still for the same reasons I started.

What else inspires you?
There are lots of different musicians, not just from Cape Breton, that really interest me.  I listen to other music that sort of falls within the Celtic genre, but that sometimes has a little something else to offer; a different swing, different ornamentation. I like to sometimes try and incorporate what I love about others’ playing into my own.

What have been some career highlights?
Releasing my debut album has been a big one, for sure. It was exciting to watch it come to life and turn into a real thing! A few years back I danced in the East Coast Music Awards Gala; that definitely makes the list. Also, 2014 was the second summer I did some gigs on board ships with Holland-America Cruises. It’s a lot of fun to be able to go to a familiar gig…but met with a totally different audience every time.

What inspired the new recording?
It was kind of a long time coming. It felt like this was finally the right time to really make it happen. I’d been putting together sets of tunes for a while, but one day gave myself a timeline of when/how I’d like things to be done, and tried to stick to that.

What were the challenges involved?
Psyching myself up to actually do it! It’s a little daunting to do everything that’s involved with making an album for the first time. Then just trying to work with everyone’s schedules to try and get some rehearsals in before we headed for the studio.

What were the rewards?
It felt so good to see it come together. The track “Saplings” for instance; Jason (Roach) and I had worked out harmony parts for Liz Carroll’s tune “The Island of Woods”, but we’d never heard all of the parts together until we were actually in the studio! I’m pretty happy with the overall turnout of the album. Some of my favourite musicians are on there with me, and that alone is pretty awesome.

What has the response been like so far?
I’m happy to report it’s been really positive! Definitely feels like it was worth the effort.

Are young people still interested in Celtic fiddling?
I think there’s still interest around. I just hope that they stick with it!

Are we doing enough to preserve and promote Celtic culture generally?
It’s great to see so many music schools and festivals around that centre around Celtic music. However, so many great music venues around Cape Breton can’t have kids in because they serve alcohol. Don’t get me wrong, there are family events around as well.  But it would be great to see those with higher attendance and more kids involved!

What can we be doing better?
It would definitely help to be able to find a way to make shows more accessible to younger people who might be interested, but not legally old enough to be there. I know when I was younger I always thought those late night ones were probably the best!

What’s ahead on your creative agenda?
Just keep moving forward. There are always tunes and stuff I’m working on.  Always lots to learn on fiddle!