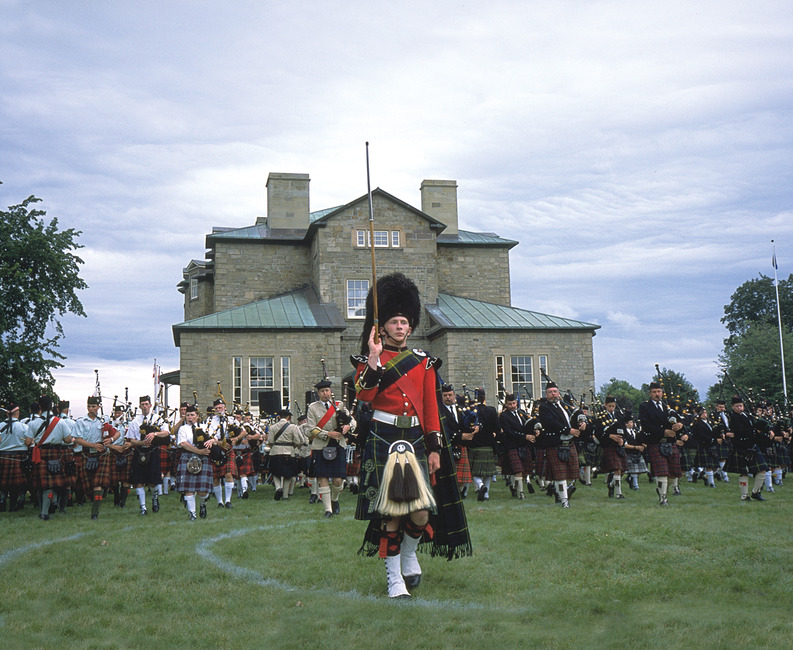 What are your own roots?
Like many, I am of mixed heritage. On my father’s side I am a proud Prince Edward Islander of primarily Scottish and English origin. On my mother’s side I am an “Upper Canadian” with Irish roots on Wolfe Island (near Kingston, Ontario). Add in a bit of Quebec French through my maternal grandmother and you have a typical Canadian blend.

When and why did you get involved with this event?
I first became involved with the New Brunswick Highland Games Festival (NBHGF) four years ago as a participant. In what some have described as my mid-life crisis, I decided to take up wearing the kilt and learning the bagpipes at the age of 50. My first year I competed in the Beginner Chanter class against a field of competitors whose combined age didn’t amount to my own! I’m now involved as a solo piping competitor, as a member of a Grade 5 pipe band and as Race Director for the Kilted 5k Fun Run that kicks off the NBHGF on Friday evening.

Why is it an important event for the community there?
The NBHGF is tremendously important to our city, to the province and to the region as a whole. It is listed as one of New Brunswick’s “Top Festivals” and one of the “100 Best Events in North America”. It is a celebration of culture for those of us with Celtic heritage and for visitors and new Canadians it is a wonderful introduction to Scottish culture – music, dance, sport and food. Topping it off, it all takes place in a spectacular location – in Fredericton on the grounds of Government House, the Lieutenant Governor’s official residence, on the banks of the beautiful St. John River, a Canadian Heritage River known as the “Road to Canada”.

Who attends the event?
Each year the NBHGF welcomes more than 5000 participants and spectators. While the majority of folks are from Atlantic Canada, there are always competitors from across Canada and the United States, and visitors from around the world. It is such a pleasure to meet visitors from Asia, Africa, South America and Europe for whom this is often the first experience they’ve had with piping, caber-tossing and haggis!

What can they expect this year?
Fun of course! The New Brunswick Highland Games Festival is like a 3-ring circus with something going on at all times. The beauty of our site layout is that everything is in close proximity so it is easy to wander between the heavy athletics site, the dance tent, the piping circle, the vendors, the workshop tents, the Clan sites and the ceilidh tent.

How has the festival evolved since last year?
Have you ever tasted a Haggis Samosa? Amazing!! Samosas are a long-time Fredericton favourite and so for our Tartan Day fundraiser in April a local chef developed a special Haggis Samosa. They were a HUGE hit and so we will be offering them for sale. Nothing demonstrates the diversity and inclusivity of our Festival better than the melding of these iconic Middle Eastern and Scottish foods! We’re also debuting a new heavy athletic event – the Picaroons Keg Toss. Of course, all the old favourites will be taking place as well – highland dancing, piping, whiskey tasting, music workshops, ceilidh entertainment and children’s activities to name but a few.

Will you remain involved with the event in the years ahead?
As long as they’ll have me! As time goes by my interest in my own Celtic heritage seems only to grow. I hope that by staying involved I will play a small part in ensuring that others also have a chance to connect with their roots and to become familiar with the important role that the Scots (and Irish) played in the building of our great nation.

How else are you involved with the Celtic community here?
I am very proud to be a member of the Fredericton Society of St Andrew Pipe Band, one of the oldest civilian pipe band organizations in Canada. We have competitive bands at both the Grade 2 and Grade 5 level as well as an active Pipes & Drums Academy program that offers students from 8 to 80 the opportunity to learn the Scottish musical arts at a very modest cost. I am also interested in genealogy and have done research on-line, at LDS Family History Centers and at the PEI provincial archives.

Is enough being done to preserve and promote Celtic culture generally?
I must admit that I am concerned that with the passage of time fewer and fewer are “in touch” with their cultural heritage. This is understandable in that, like me, many are of mixed heritage and several generations removed from “the old country”. We also live in increasingly hectic times so people often don’t have the time to become involved in cultural associations or historic societies. Technology though offers us amazing opportunities to connect and build relationships. The New Brunswick Scottish Portal Project http://www.nbscots.com/scottishportal/outline.asp and the PEI Island Register http://www.islandregister.com/ are two wonderful examples. I’m also a big fan of those who are “pushing the envelope” of cultural evolution – fashion designers like Veronica MacIsaac and artists who incorporate traditional instruments like the pipes in modern music. Of course events like the NBHGF are of vital importance in preserving and promoting Celtic culture.

What can we be doing better?
Pride in our culture can’t simply be a once-a-year event. It ought to be an everyday undertaking. Join your clan or cultural association! Get and wear a kilt! Promote piping and drumming as a music option in our public school system! Volunteer at an event! Visit your local library and borrow one of the many wonderful books on the Celtic contributions to Canada (and the rest of the world)! If we each do a small part, the combined impact will be spectacular.